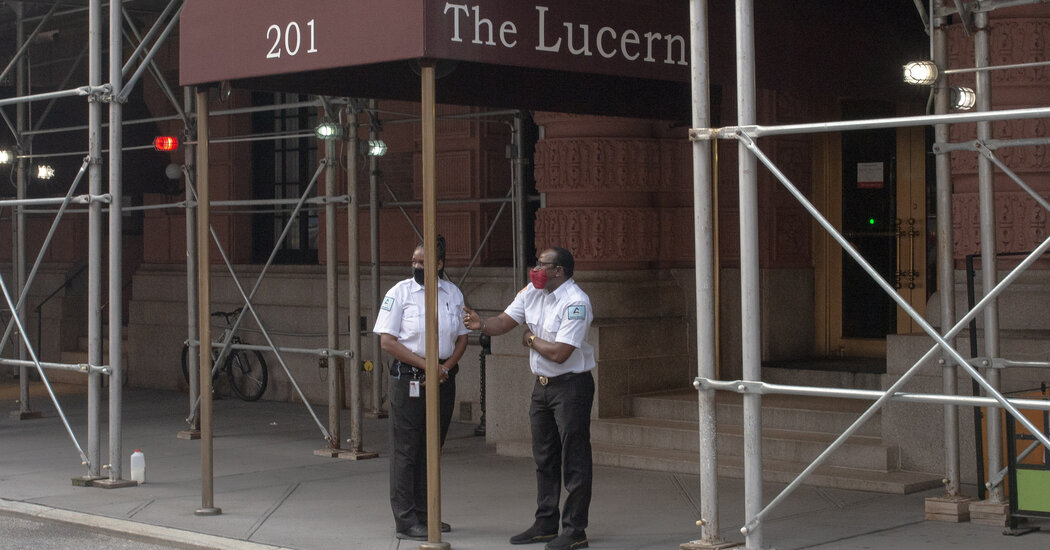 Nearly 300 homeless men who had been temporarily living in a hotel on the Upper West Side of Manhattan will be relocated after weeks of backlash from some residents who said the men had diminished the quality of life in the upscale neighborhood.

The city had moved the men into the hotel, the Lucerne, in July as part of an effort to curb the spread of the coronavirus in New York’s dormitory-style homeless shelters. Over all, thousands of homeless men and women have been placed in hotels around the city.

But the decision was met with particular blowback on the Upper West Side, becoming a test of values for a largely white neighborhood with a reputation as one of the most liberal enclaves in New York and elsewhere in the country.

In a private Facebook group — Upper West Siders for Safer Streets — many commenters said that the men menaced pedestrians and urinated and defecated on the street, and that they used and sold drugs in the open.

Some residents formed a nonprofit, the West Side Community Organization, and hired a lawyer and former deputy mayor, Randy Mastro, who threatened to sue the city.

The conflict led other residents to accuse their neighbors of racism and hypocrisy: Covid-19 has disproportionately affected Black and Hispanic populations, which also represent most of the estimated 80,000 people who are homeless in New York.

Isaac McGinn, a spokesman for the city Department of Social Services, would not comment on Tuesday on whether the uproar prompted the decision to move the men, but said that their stint in the hotel was always meant to be temporary. The city will begin transferring the men as early as this week.

“As part of our effort to continually review and streamline the footprint of our shelter locations, while always ensuring effective provision of services, we’re beginning to relocate individuals from several commercial hotel locations,” he said in a statement.

“Families, seniors, small business owners, longtime residents and newcomers united,” Mr. Mastro said. “They were shocked and horrified to see what was happening in broad daylight in their neighborhood, and they wanted to do something about it.”

Mr. Mastro, who worked in the administration of former Mayor Rudolph W. Giuliani, said he wrote to Mayor Bill de Blasio about the neighborhood concerns late last month and then followed up with other city officials.

The move disappointed many in the community, who said the men’s presence was not disruptive and the concerns had been largely overstated.

“It’s a sad day when the mere threat of a lawsuit can get city hall to reverse a decision it made,” said Helen Rosenthal, the council member who represents the community. “What message does this send that groups who can afford to hire high-powered lawyers are the ones who will get their way?”

Ms. Rosenthal said that many of the quality-of-life concerns raised by residents had already been addressed.

Joshua Goldfein, a staff lawyer at the Legal Aid Society, said advocates would monitor the transfers.

“Homeless single adults have a right to shelter, and that shelter has to be safe for them,” he said. “If the city were to move people into a situation that is not safe, we will have to litigate that.”

Mr. Mastro is a vice chairman of the Legal Aid Society’s board of directors, and the controversy put him at odds with the organization. “We all share a common goal to try to do the right thing even when we see things differently,” he said.

During the coronavirus outbreak, the city’s Department of Homeless Services has moved roughly 9,500 people from shelters into 63 hotels across the city, 32 of which are in Manhattan. The relocations have led to scattered complaints in other parts of Manhattan and parts of Queens.

The city will also transfer women out of the Long Island City Plaza, a hotel in Queens that has also been used to house homeless people since the beginning of the pandemic. Along with the men in the Lucerne, they will be moved to shelters with private rooms that were initially designated for families but are not currently full.

A moratorium on evictions has decreased the number of families who would normally be seeking refuge in the city’s shelter system, whereas closings of public buildings and a crackdown on people staying on the subway trains have driven more single adults into shelters.

Before the coronavirus crisis, the number of single adults in the shelter system hovered around 15,000. Now, nearly 18,000 single adults are living in shelters. They would normally stay in dormitories, where twin beds are close enough for the people sleeping in them to touch hands. But there was an immediate concern that the conditions could help to spread the virus, and the city began moving people into hotels.

As of Sept. 1, the city had confirmed 1,249 positive cases among homeless people living in 200 different shelters. A majority were single adults.

“The reason New York is doing so well right now is because people are able to socially distance,” Mr. Goldfein, the Legal Aid Society lawyer, said. “So the city’s use of hotels is part of the reason why the Covid positive rates we see everyday are so low.”