A New York hotel maid who claims she was sexually assaulted by International Monetary Fund chief Dominique Strauss-Kahn in 2011 has spoken out about her ordeal for the first time.

Nafissatou Diallo was working as a maid at the Sofitel New York Hotel when the then  French presidential hopeful, who was 62 at the time, allegedly tried to rape her in May 2011.

Nine years on, speaking of the alleged assault to French magazine Paris Match, Diallo said it had ‘ruined her life,’ and added that if Dominique Strauss-Kahn (often referred to as DSK) had been poor, he would be in prison.

The criminal lawsuit against Strauss-Kahn was dismissed in August 2011 by the prosecution on the basis that Diallo had not been truthful ‘on matters great and small.’

Diallo received a settlement a year later for an undisclosed amount after the civil suit was dropped, and has not spoken publicly about the allegations since 2011. 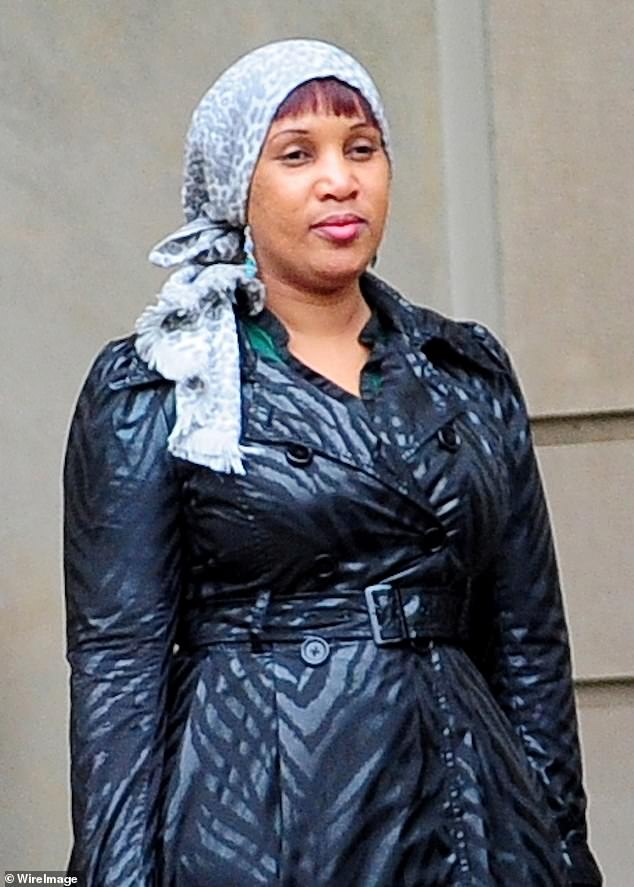 Nafissatou Diallo, pictured in New York in 2012, was allegedly sexually assaulted by International Monetary Fund chief Dominique Strauss-Kahn in 2011. She has opened up about the ordeal in a new interview with French Magazine Paris Match

Diallo told the French magazine the way the New York prosecutors treated her made her ‘suicidal.’

‘I told the truth, I was tricked and betrayed,’ she said.

‘I will never get over how the New York prosecutors treated me. Due to what they put me through, I’ve been suicidal, I was called a prostitute,’ she added.

Diallo said she received death threats and had to move out of her apartment to a safe house outside of New York during the legal proceedings against DSK, which lasted from May to August 2011. 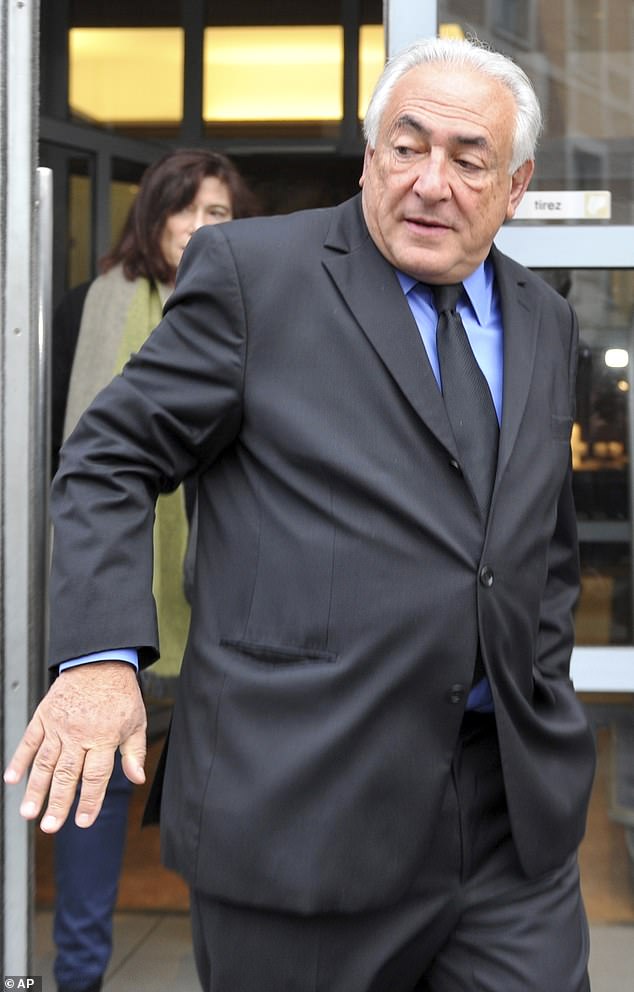 Charges against Strauss-Kahn were dropped after the New York prosecution said Diallo had been ‘untruthful’ on several occasions, changing her story several times (pictured: DSK in 2015)

Yet, she said she did not regret reporting the politician to the police.

‘If I had to do it over again, I would. I would do exactly the same thing. Something happened to me, I told the truth and I was denied justice,’ she said.

Asked whether she had a message for Dominique Strauss-Kahn, Diallo said she did not want to think about the IMF chief.

She said: ‘I assure you, if [Mr Strauss-Kahn] had been poor, homeless, a tramp, he would be in prison today.’ 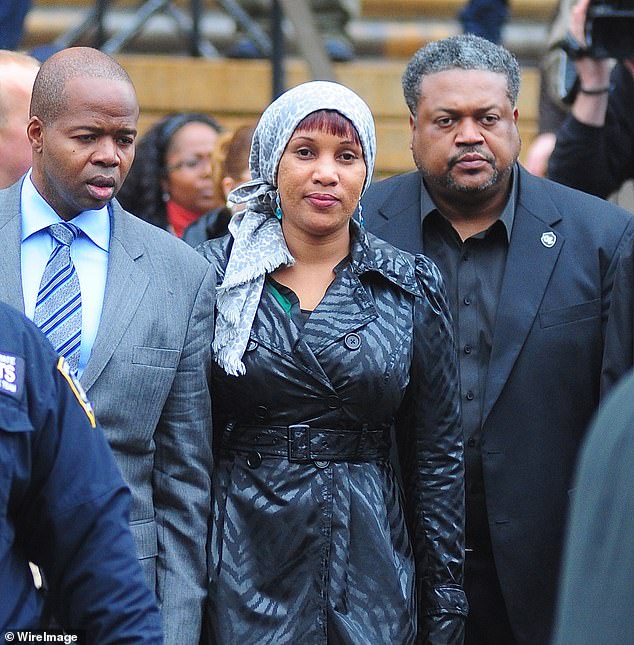 Diallo, pictured with her attorney Kenneth P. Thompson (left) in 2012, said the ordeal ‘ruined her life’ after she received death threats

Looking to the future, Diallo said she was hoping to help other women like her.

‘I want to create a foundation. I already have the name in mind, to help women who, like me, arrived in America without education, without speaking English, and who went through horrible situations in their lives.

‘I never considered myself to be an advocate for women, but today, I want what I went through to be useful to others.

It was reported by French news channel BFMTV and DSK biographer Michel Taubmann that Diallo received $1 million (£770,555) to drop the charges against him, however, she did not confirm the amount.

Diallo’s new comments on the case against DSK have reignited the debate over her story in France, where her interview has been discussed on all TV channels since the announcement of its publication this week.

The scandal erupted in May 2011 when the Sofitel New York Hotel maid claimed the International Monetary Fund chief had sexually assaulted her while she was working in his room.

At the time, DSK was the favourite in the upcoming French presidential election of 2012, but the case blew his chances of making it to the Élysée Palace and cost him his job as the head of the IMF after he was forced to resign.

Who is DSK, Dominique Strauss-Kahn?

Dominique Strauss-Kahn, often referred to as ‘DSK,’ is a French politician who headed the International Monetary Fund (IMF) from  1 November 2007  to 18 May 2011.

He was France’s Finance Minister from 1997 to 1999 under President Jacques Chirac, and was recognised as one of the country’s most prominent economic experts.

He announced his candidacy in the French presidential election of 2012 and was a favourite against returning president Nicolas Sarkozy.

In 2011, he was at the heart of the Sofitel New York Hotel scandal, when hotel maid Nafissatou Diallo accused him of sexually assaulting her.

This cost him his role as IMF chief and blew up his chances to win the presidency in the upcoming election.

Since the scandal, DSK has resumed work and scored several high profile jobs, including advisor to Sudan and Serbia.

He’s also given a number of lectures in Asia from 2014.

After the case was filed against him by the State of New York on behalf of Nafissatou Diallo, DKS posted a $1million bail and was put under house arrest in New York.

Because of DSK’s high profile and long political career – he was France’s Finance Minister from 1997 to 1999 under President Jacques Chirac – conspiracies theories multiplied.

After his arrest, a poll showed 57 percent of French voters believed he was the victim of a smear campaign and prominent French political figures came forward saying they believed he had been framed by his political opponents.

In July 2011, the prosecution asked for the charges against DSK to be dropped on the basis that Diallo had been ‘persistently, and at times inexplicably, untruthful in describing matters of both great and small significance.’

This was based on the fact Diallo changed her story several times after the case was filed and the fact physical evidence showed no sign of violence.

The civil suit was officially dismissed in August of the same year and Dominique Strauss-Kahn swiftly returned to France.

In an interview with French media upon his return, DSK eventually conceded he had had a sexual affair with Diallo, which he called a ‘moral failure,’ but denied the use of violence.

In 2011, Strauss-Kahn found himself at the heart of another sex scandal after he was accused of procuring prostitutes for a prostitution ring in northern France.

It emerged that the financial experts loved to attend sex parties with women and alcohol, organised by the Press Relations Officer for the Cartlon hotel in Lille, France.