Having dipped his toe into the world of TV with the acclaimed Sky series The Young Pope, Oscar-nominated Jude Law is back on the box this week in ambitious new six-part Sky Atlantic drama The Third Day.

With most theatres still closed and big music events on hold, Sky aims to give us a taste of what we’re missing by airing a 12-hour performance screened live as an extra element halfway through the series, about a man stranded on a weird island inhabited by religious fanatics.

The project is the brainchild of Dennis Kelly, the writer of C4’s black comedy Utopia, and Punchdrunk, a performance company that specialises in immersive, semi-improvised theatrical experiences.

Emily Watson plays pub landlady Mrs Martin, one of the few on the island who welcome Jude’s character Sam and invites him to stay. 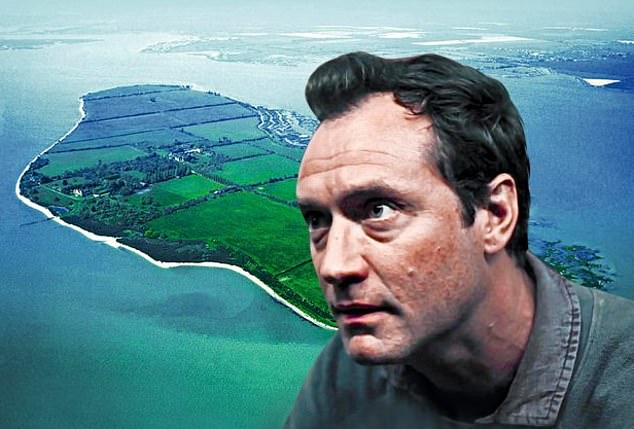 ‘What’s been wonderful is that half the supporting artists are Punchdrunk actors, which takes it to another level,’ says Emily.

‘So I was serving beer to these creative people who are much more used to that kind of improvised work than I am. It gives everything an energy.’

After trying to help a young girl in trouble, Sam arrives unplanned on the island – filmed on the real, privately owned Osea Island off the Essex coast, where stars such as Cara Delevingne have partied and pop star Rihanna has recorded music – and finds the locals are preparing for an oyster festival.

But things soon turn weird as the secretive rituals of its inhabitants force Sam to grapple with a past trauma, and the line between fantasy and reality fragments.

’The people believe in a religion which is basically Christianity, but shot through with some disturbing pagan elements,’ explains Emily.

‘It’s a cult really. So Sam arrives on the island then can’t get off, which is partly his choice but partly him being manipulated and partly just bad luck.

‘The island has this allure. People want to stay, it’s feral and extreme. In episode two there’s a rehearsal for the festival, which was great fun to film. There were explosions and bonfires and people in weird masks.

‘There’s a bit where Sam takes acid that’s given to him by a girl, and he’s looking at me,’ adds Emily. 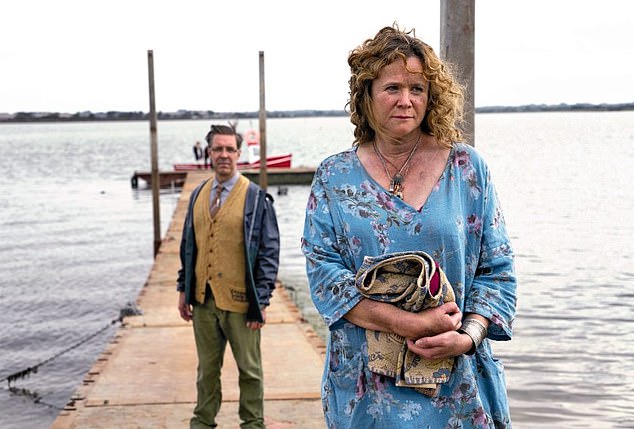 Emily Watson who plays pub landlady Mrs Martin (pictured), said the people on the island believe in a religion which is like Christianity but with disturbing pagan elements

‘They made a latex mask of my face which was very peculiar. It made me look like a cross between Cranford actress Deborah Findlay and Mrs Doubtfire! So it’s been a unique experience…’

The live episode, which will air after episode three with just a single camera following the actors and work in real time over the course of a day, covers the festival itself when the celebrations become more unhinged.

‘Dennis Kelly’s brain works in a very unusual way,’ says Emily. ‘It’s grisly and weird. And there will be some astonishing reveals, like EastEnders cliff-hangers.’

By the time the live element is over and episode four airs, the detritus of the festival is everywhere and it’s clear things have gone very wrong.

If you watched the live play you will know what has happened, but if not it will be easy to pick up the plot as Naomie Harris’s character Helen arrives after being drawn to the island. 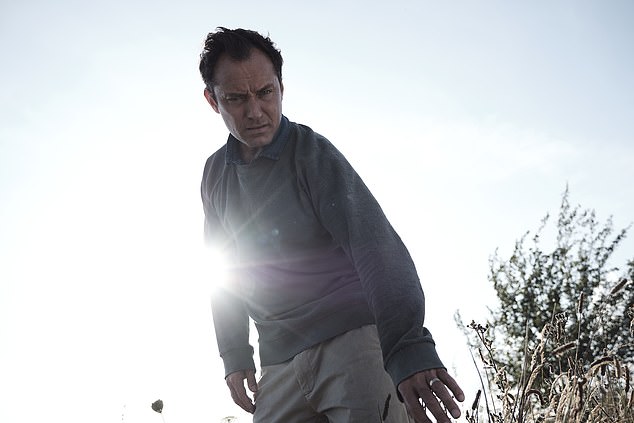 Paddy Considine who plays Emily’s husband Mr Martin, said he’s still trying to get his head around what the live part of the series will be like. Pictured: Jude Law

‘It’s unwelcoming. People are behaving very oddly. Everybody seems terrified, but she doesn’t know what of. There’s a general sense of terror in the air.’

The series also stars The Suspicions Of Mr Whicher’s Paddy Considine, who was attracted to working on the live part.

‘I’m still trying to get my head around what it’ll be like,’ says Paddy, who plays Emily’s husband Mr Martin.

‘It’s a great idea, crossing a TV show with a live experience, and it’s not really been done before as far as I know, so that unknown element is exciting. We’re only going to know by doing it if it works.’

The Third Day begins on Tuesday, 9pm, Sky Atlantic and Now TV. The live event is on Saturday 3 October, 9am, Sky Arts.