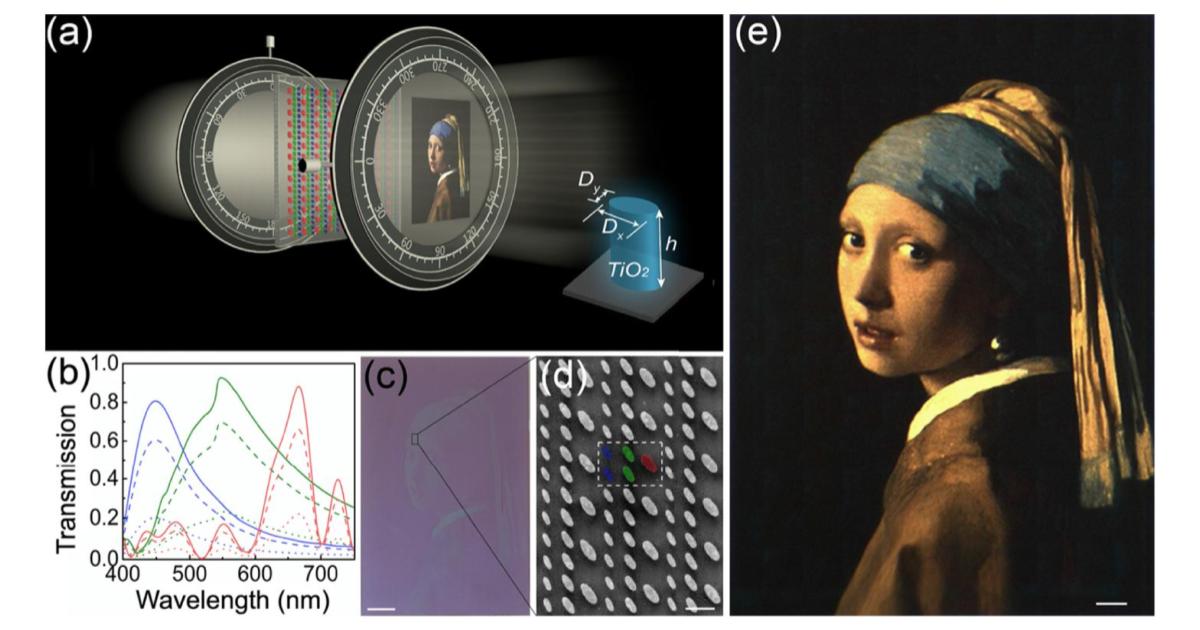 Painting with light is a technology newly developed by researchers at the National Institute of Standards and Technology (NSIT). By shining white light on a glass slide with millions of titanium dioxide pillars, they have reproduced Dutch artist Johannes Vermeer’s masterpiece, the “Girl with a Pearl Earring.”

The novel technology is useful in improving optical communications and in making paper money more difficult to counterfeit.

The scientists can control the amount of information the optic fiber can carry by adding a particular color wavelength of light that travels. In addition, researchers can maintain its brightness as it travels long distances by altering the intensity.

By using this technology on paper money, counterfeiters will have a hard time forging due to the intricate color details.

However, the scientists find it challenging to control the intensity of the colors even after successfully arranging millions of nanopillars that were made to transmit blue or green, along with red lights, to create a specific color palette.

By using the nanopillars to trap, emit, and change polarization by varying intensity, the researchers were able to demonstrate a way to control color. They published their findings in the journal Optica on September 4.

Researchers fabricated titanium dioxide, with an elliptical cross-section, on a glass slide pillar with a long or short axis. They designed the nanopillars so that at different locations, the long axis is either more aligned or less aligned with the polarization of the incoming light.

The polarization of the transmitted light is unaffected if the long axis of the nanopillar is precisely aligned with the direction of polarization from the incoming light.

The filter prevents any light retained from the original polarization to pass through and reduces the intensity of polarized glare. That region would project as a dark spot on a distant screen. But in some places, the nanopillar rotated the polarization of the white light and controls both color and brightness.

Reproducing the “Girl With a Pearl Earring”

After creating the basic design, the researchers demonstrated a miniature digital copy of Vermeer’s “Girl With a Pearl Earring” about 1 millimeter long. They used the digital information to guide the fabrication in the matrix of the nanopillars, which involved one red, two green, and two blue.

Upon examining the miniature version of the painting, the researchers saw that they were able to reproduce Vermeer’s masterpiece with extreme clarity, including the texture of oil paint on canvas.

NIST researchers said it was remarkable and that it bridges the field of art and nanotechnology. This novel technique can be adapted to transmit specific colors of light of varying intensities to be used in optical communication or to imprint valuable items on paper money that is hard to replicate.

Check out more news and information on Nanotechnology on Science Times.

©2017 ScienceTimes.com All rights reserved. Do not reproduce without permission. The window to the world of science times.