A New York man who suffered a heart attack earlier this year was afraid to go to the emergency room over fears of falling ill with the novel coronavirus.

Two weeks ago, Deepak Gulati, 71, who lives in Manhattan, was suffering from horrible chest pain, swearing and was unable to breathe.

He tried to sleep it off but the pain kept getting worse. However, Gulati didn’t want to go to the ER because he was worried about contracting COVID-19, the disease caused by the virus.

After pressure from his wife and cardiologist, he caved and his sought care. It turns out his pain was from a massive heart attack and had he waited a few hours longer, he would have died.

Now, Gulati is sharing his story with DailyMail.com to encourage others not to delay  seeking urgent medical attention because it could mean the difference between life and death.

SCROLL DOWN FOR VIDEO 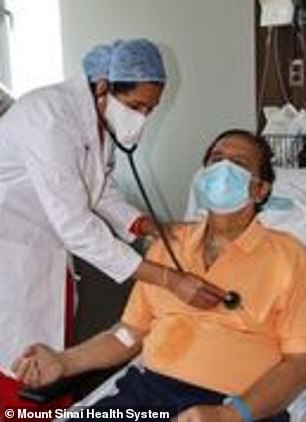 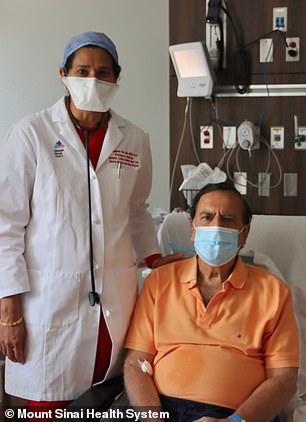 Deepak Gulati, 71, from New York City, began feeling tightness in his chest on June 18. It continued over the next two days and progressed to severe pain, sweating and being unable to breathe. Pictured, left and right: Gulati being examined by Dr Annapoor Kini, a cardiologist at The Mount Sinai Hospital 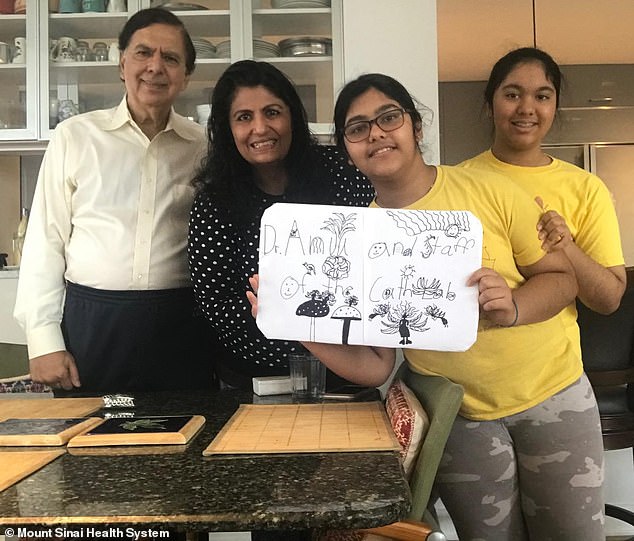 Gulati did not want to go to the emergency room because he was afraid of contracting coronavirus, but his wife and cardiologist finally convinced him. Pictured: Gulati (far left) with his wife (second from left) and two daughters after his heart attack

Gulati says that before this incident occurred, he had had no health issues, let alone heart troubles.

On Thursday night, June 18, he started feeling tightness in his chest. When he still felt it the next day, his wife called her colleague at The Mount Sinai Hospital, Dr Annapoorna Kini.

Kini, who is a professor of cardiology and Interventional Director of the Structural Heart Program at the Icahn School of Medicine at Mount Sinai, told Gulati to come see her at 1pm on Monday, June 23.

‘Well, I didn’t make it that far,’ Gulati joked.

On Saturday morning, he was walking uphill – after going on a morning stroll – when he felt tightness in his chest and started sweating. Gulati tried to sleep it off.

‘I went and sat in the living room and had a sip of water and suddenly that tightness in my chest came back, but this time, it didn’t just come back. I found I couldn’t breathe.

‘It’s like an iron fist clamping around your lungs.’ 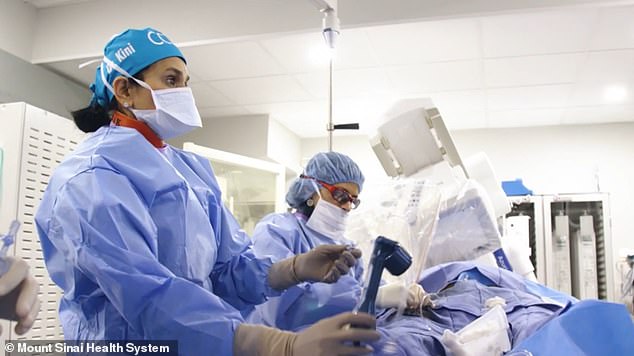 Doctors discovered Gulati was suffering from a heart attack called a STEMI, in which there is a complete blockage in an artery leading to the heart. Pictured: Kini performing a procedure on Gulati 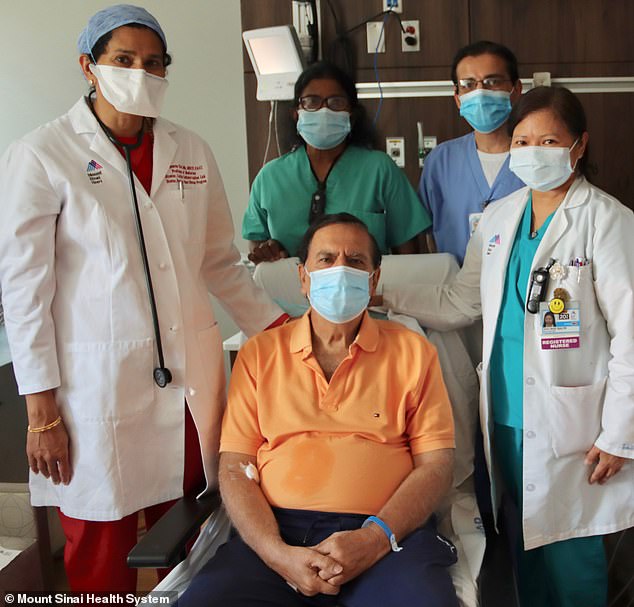 Cardiologist Dr Annapoorna Kini told Gulati that if he had waited just two more hours to go to the hospital, he would have died. Pictured: Gulati (center) with Kini (far left) and members of Mount Sinai’s cardiology team

Gulati’s wife wanted him to go to the emergency room, but he was hesitant.

‘I said: “No, that place is full of coronavirus, I don’t want to be there. It’s full of people passing coronavirus to other people,”‘ he said.

Gulati is not the only one who feels that way.

A new report from the Centers for Disease Control and Prevention last week found that ER visits for heart attacks fell by nearly a quarter from pre-pandemic levels.

But scientists have warned that not seeking immediate care for severe health problems could result in hospitalization, or even death.

‘I told him he was likely having a heart attack and “You have to go to the emergency room”,’ she told DailyMail.com.

‘Otherwise he would be making excuses to stay home.’

It turns out that Gulati was suffering from an ST segment elevation myocardial infarction (STEMI heart attack). 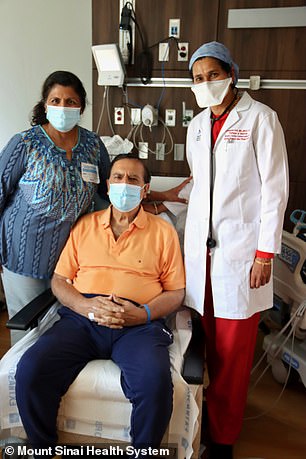 Gulati had a stent placed in his heart, has no heart damage, and was told he should be back to normal in just six weeks. Pictured: Gulati (center) with his wife (left) and Kini (right)

However, if medical professions are able to open up the artery within the first few hours of blockage, survival odds increase and risk of muscle damage decrease.

‘[Dr Kini] told me that if I waited two more hours, I would have been dead,’ Gulati said.

‘She should change her name to “Angel in disguise.” I can’t praise her enough.’

Within an hour of arriving at The Mount Sinai Hospital, he was having a stent inserted.

He added that the emergency room was almost empty and that it had been split in two, one side to treat COVID-19 patients, and the other side for non-COVID patients.

Kini says that Gulati has no heart damage because he arrived at the hospital on time and, within six weeks, he should be back to normal.

She wants Americans to know that emergency rooms are safe..

‘I know the pandemic is still out there and that there’s a scare of a second wave coming…but all precautions are being taken in every hospital,’ Kini said.

Gulati concurs and says being afraid of seeking urgent medical care is not worth losing your life over.

‘Because death could only be two hours away.’