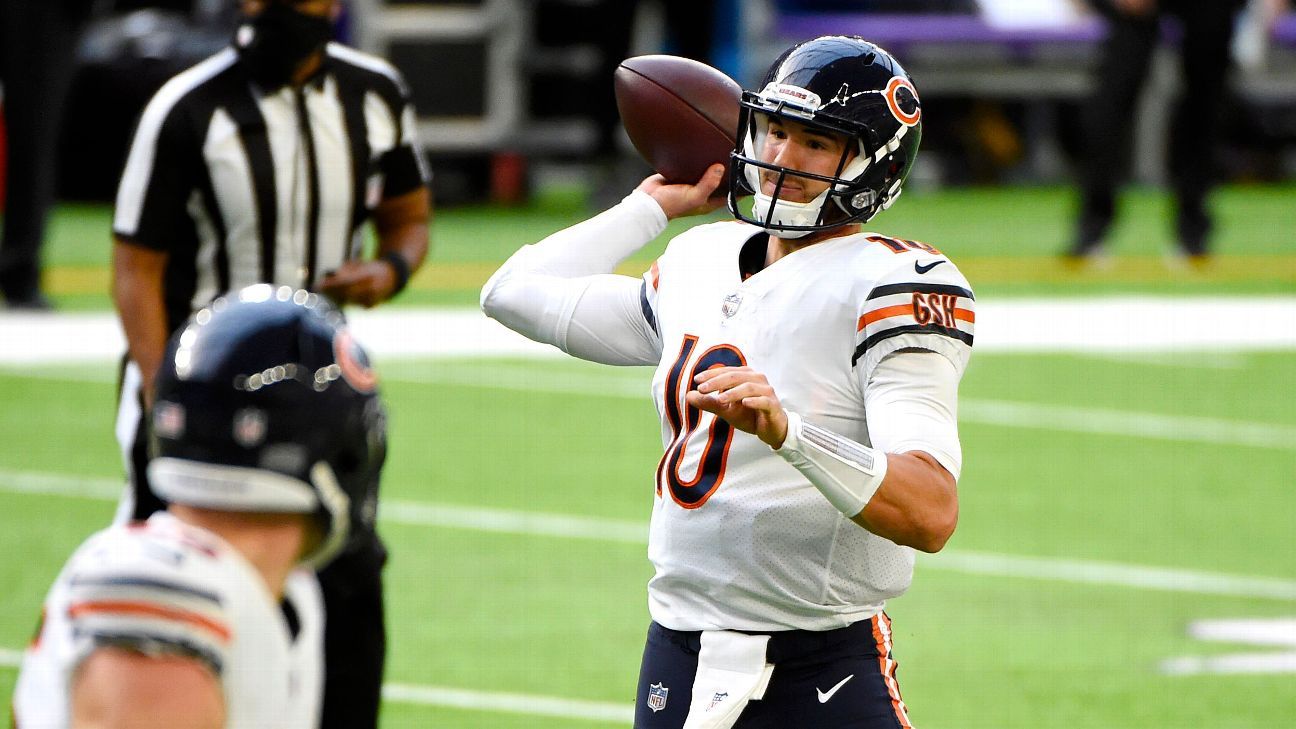 Chicago Bears quarterback Mitchell Trubisky has made a strong case as to why he should be the latest player to have his fifth-year option declined, only to cash in on that decision.

In the eyes of some NFL executives, Trubisky recently has played some of the best football of his career, making a case as to why Chicago will need to consider re-signing him.

Trubisky’s chances of returning to Chicago next season would be even greater if the Bears (7-7) can win their final two regular-season games and clinch a playoff berth.

Trubisky and Bears coach Matt Nagy have combined to post a 24-12 record in games in which Trubisky has started, as he will Sunday against the Jacksonville Jaguars. The Bears are 3-7 under Nagy in games Trubisky has not started.

Trubisky’s performance and record now have left some in the Bears organization wondering what might have happened this season if the 2017 No. 2 overall pick hadn’t been benched when the Bears were 3-0.

Chicago is 2-5 this season with Nick Foles as the starting quarterback, averaging just 17 points in those games.

But since Trubisky has been reinserted as the starting quarterback, the offense is averaging 31 points over its past four games — and Chicago is back in playoff contention. The Bears, who control their own destiny thanks to the Cardinals‘ upset loss Saturday to the 49ers, visit the one-win Jaguars on Sunday before finishing their season at home against the rival Packers.

One NFL executive told ESPN this week that, with the way Trubisky has played down the stretch, Chicago now will have to consider bringing him back — a possibility that seemed hard to imagine after he was benched this season.

Trubisky’s chances of staying in Chicago long term also appeared slim after the Bears declined his fifth-year option this past May — two months after they acquired Foles in a trade with Jacksonville.

But Trubisky is having a strong finish to the season, joining Titans receiver Corey Davis as 2017 first-round draft picks to have their fifth-year option declined and then thrive in 2020.

Chicago’s late-season shift to more play-action passes seems to have made a difference for the 26-year-old quarterback, who has used his young playmakers in Darnell Mooney, Cole Kmet, Anthony Miller, David Montgomery and Allen Robinson. Trubisky has completed 68% of his passes with eight touchdowns and only three interceptions over Chicago’s past four games.

The stretch drive has impressed some executives around the league, but one person pointed out that Trubisky’s recent success is not all that new.