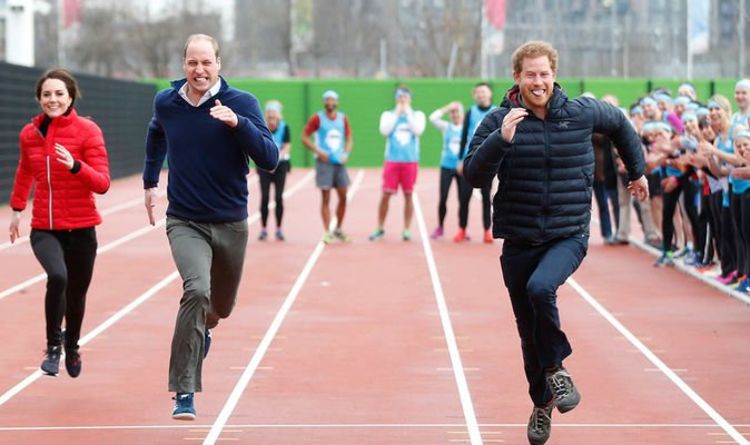 This message was accompanied by a picture showing Kate, William and Harry running on the tracks at the London Olympic Park.

In the picture, Prince Harry is ahead while the Cambridges follow behind laughing.

This snap is particularly meaningful, as it was taken in February 2017, when the three royals joined the Heads Together team training ahead of the London Marathon.

Kate, William and Harry launched Heads Together, a campaign to end the stigma around mental health, in May 2016.

However, a few social media users criticised Kensington Palace for not featuring Meghan Markle, Harry’s wife, in the birthday message for the Duke.

One Twitter user, Kristin: “Loving the shade of not including Meghan in the photo they chose.”

Comedian and podcast presenter Sheletta Brundidge added: “Did they just wish Harry a happy birthday and put themselves in the photo but not HIS wife and child?

“Honey, no wonder Harry is running in this picture.

“He’s trying to get up out of there to be with his IMMEDIATE family!

On that occasion, the Cambridges’ office opted for a picture showing only the Duchess of Sussex during a private engagement in Windsor rather than include also her husband Prince Harry.

In that picture, Meghan is crouching and speaking to a toddler holding a cupcake.

Other social media users perceived the picture published on Prince Harry’s birthday as a slight at the Duke and Duchess of Sussex’s decision to move out of Frogmore Cottage and relocate to California.

Twitter user Claire wrote on Twitter: “Lovely to see The Cambridges acknowledge Harry’s birthday but did make me chuckle using this picture as is it tongue in cheek him running away.”

Royal fan Sam said: “This picture of Harry running away is hilarious.”

And Twitter user Takauno4u added: “Why do they choose this picture…? It’s literally, ‘he ran away from us’.”

Prince Harry is tipped to be spending his birthday with his wife and son, Meghan and Archie Harrison.

The family-of-three are likely spending the day at their home in Santa Barbara, as most indoor dining venues remain close in the midst of the coronavirus pandemic.

According to a source, Meghan, Archie and Harry had also spent much of the Duke’s 35th birthday at home.

Last year, the Duchess of Sussex recreated their first trip to Botswana in 2016 in the backyard at Frogmore Cottage.

The source said: “It’s a place that means so much to them — and to Harry in particular — so Meghan wanted to bring that happy place to him on his day so she set up a tent, got sleeping bags, cooked dinner and recreated Botswana where they fell in love.”