A one-year-old boy was killed and his parents were severely burned as they fled from a wildfire in Washington state.

Jake and Jamie Hyland and their infant son Uriel were evacuating their property in rural Okanogan at around midnight on Sunday when they got trapped by the Cold Springs Fire, according to a GoFundMe campaign set up by loved ones.

The family’s scorched truck was found abandoned on the side of a road on Tuesday afternoon, before search and rescue teams discovered Jake and Jamie, who is pregnant, gravely injured on the banks of the Columbia River.

Baby Uri was already dead, bringing the death toll from fires raging up and down the West Coast to seven. 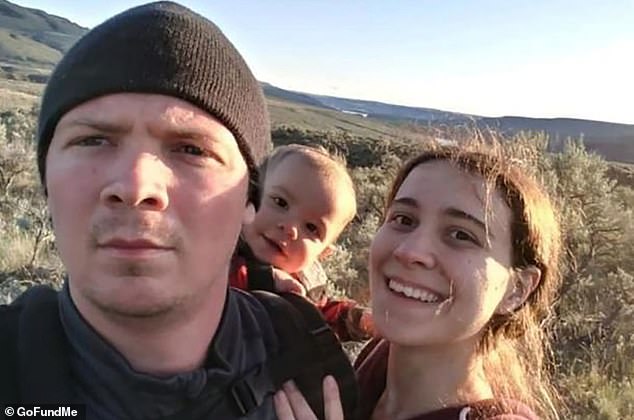 Jake and Jamie Hyland were severely burned and their one-year-old son Uriel was killed as the family fled from a wildfire in Okanogan County, Washington, on Sunday night

The parents were transported to Three Rivers Hospital in Brewster before being airlifted to Harborview Medical Center in Seattle.

Jamie, 26, suffered burns covering 40 to 50 percent of her body and underwent surgery on her arms, a relative wrote in the GoFundMe page.

Jake, 31, was burned on 25 percent of his body and was preparing for surgery on his arms as well.

Doctors are still working to clean the wounds on both parents to determine the extent of their internal injuries.

‘They are both still critical at this point, but Jamie is more so than Jake,’ the relative wrote.

‘They have significant injuries and a long road ahead of them. Please keep them in your prayers.’

The Hyland family, who live outside Portland in Renton, had been visiting their house in Okanogan for Labor Day weekend.

The relative said the remote property doesn’t have cell service, so it’s possible the family didn’t receive alerts about the fire blazing toward them until it was too late to evacuate safely.

Okanogan County Sheriff Tony Hawley said his office was notified that the Hylands were missing on Tuesday and located them hours later.

Investigators believe the family were forced to abandon their truck as they tried to escape the Cold Springs Fire.

The fire erupted near Omak on Sunday night and has already torched more than 163,000 acres. It was 10 percent contained as of Wednesday night. 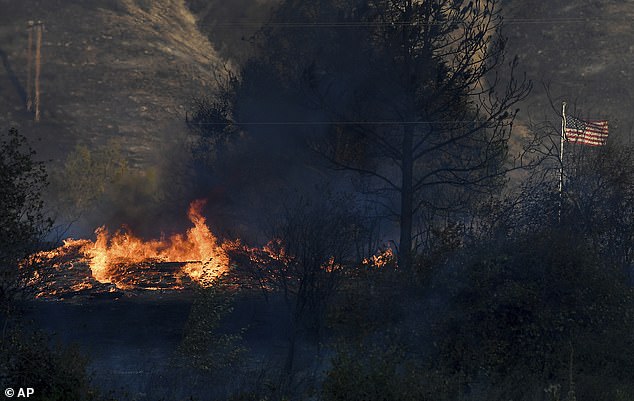 The Cold Springs Fire (pictured on Monday) has torched 163,000 acres since it erupted in Okanogan County on Sunday night

The cause of the fire has not been determined, but Hawley said Uri’s death will be labeled a homicide if it turns out to be an arson.

‘It would be treated as a homicide, if it were to be determined to be a human-caused, criminal fire,’ the sheriff said. ‘That’s the way we’re investigating this at this point, because if we don’t collect everything at this point, we can’t go back and do that.’

Hawley said Uri’s was one of the most tragic wildfire-related deaths he’s seen in his 25 years with the sheriff’s department.

‘The death of a one-year-old doesn’t even compare to when we reach our adulthood and we have choices to be places,’ he said.

‘To even be talking about the death of a one-year-old is just devastating.’

Hawley praised the efforts of firefighters battling blazes around his community but expressed frustration with a lack of resources.

He attributed aid delays to the fact that dozens of wildfires are currently burning across the state of Washington and around the western US.

‘We’re competing for resources just like everyone across the nation,’ he said.

Ninety major fires in 13 states have torched more than 3.4 million acres over the past week – decimating entire towns in Washington, Oregon and California.

In Oregon, a twelve-year-old boy named Wyatt Tofte and his grandmother Peggy Mosso were killed in a wildfire in the Santiam Valley.

The fire also was suspected of causing at least one death outside of Ashland, Oregon, while another three were feared dead in the California Bear Fire that swept through Butte County on Tuesday night. 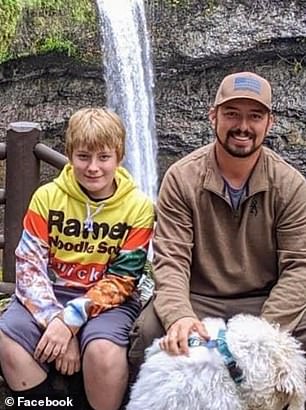 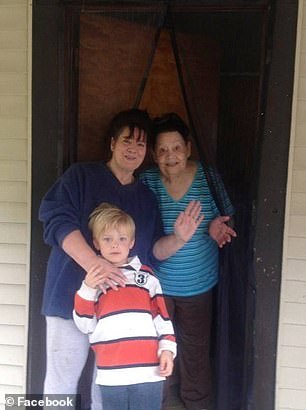 Wyatt Tofte, 12, (far left) and his grandmother Peggy Mosso (in the right-hand picture, left in dark blue) died in a wildfire burning near the Santiam Valley community of Lyons, about 50 miles south of Portland. The boy’s mother is currently in hospital in critical condition