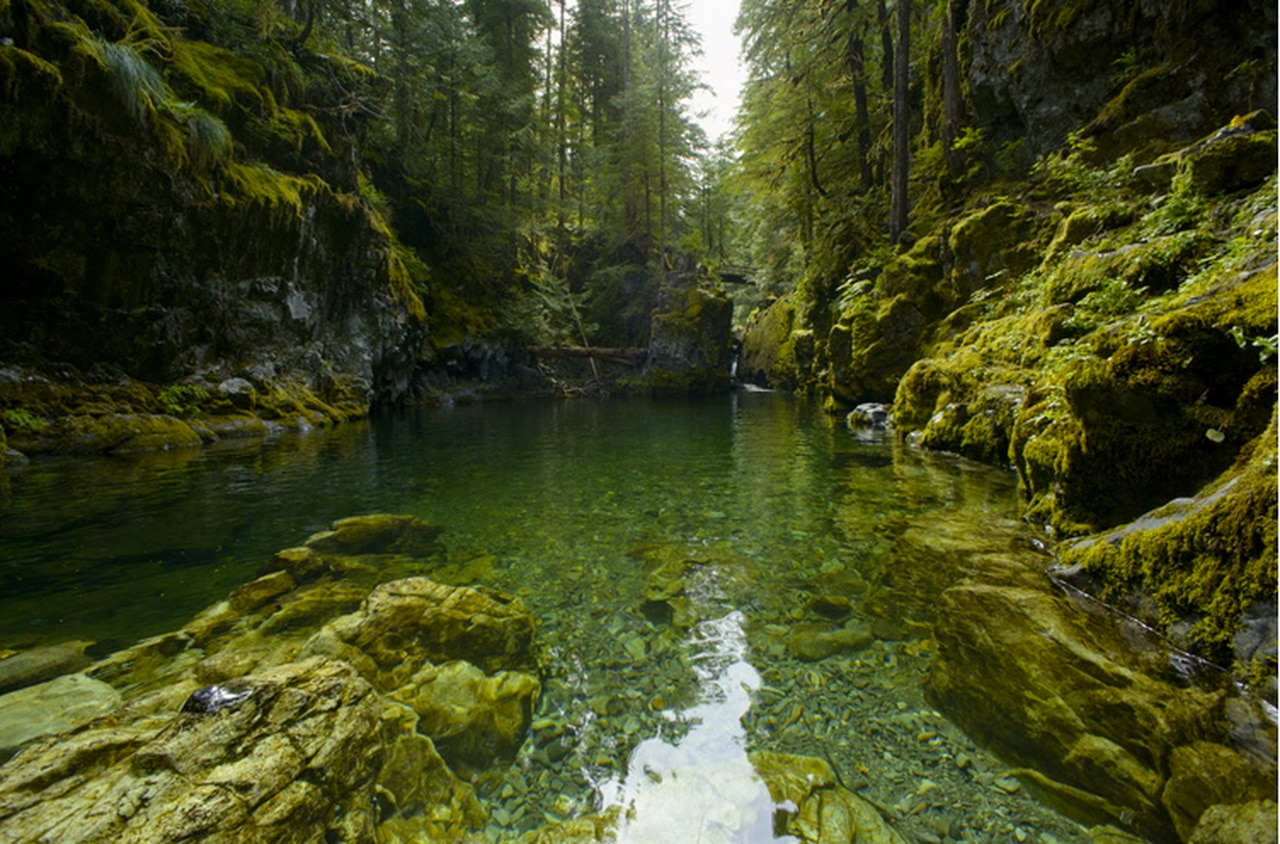 George Atiyeh, the reluctant icon of Oregon’s environmental movement for his central role in saving Opal Creek from clear-cutters, has gone missing after the Beachie Creek fire roared down the Little North Fork of the Santiam River and burned his house to the ground.

No one has seen Atiyeh, 72, since before the fire, according to friends and relatives.

The same fire that wiped out Atiyeh’s house also has hit his beloved Opal Creek, the federally protected landscape known for its enormous, ancient trees and crystalline pools. Though it’s impossible to get access at this point, the stream and surrounding forest that made the site one of the state’s premier hiking destinations, are in the fire zone.

Aniese Mitchell, Aityeh’s daughter, posted Friday night on Facebook that the “Atiyeh family is officially listing George Atiyeh as a missing person in the Beachie Creek fire. His house and property were a total loss.”

“Search parties have been through the areas of his last known location,” the post said. “… If anyone has any information regarding him please contact the Marion County Sheriff’s Office.”

Mitchell told The Oregonian that she last talked to her father Monday night. He was determined to stay. “He didn’t feel like he was in danger,” she said.

Ric Bailey, another prominent Pacific Northwest environmentalist, said Atiyeh was the first lonely voice to save Opal Creek from logging. “He’s totally recognized as the guy who started it all,” Bailey said.

The 13,500-acre Opal Creek Scenic Recreation Area and the 21,000-acre Opal Creek Wilderness Area are in the Willamette National Forest. The heart of the area is about 50 miles east of Salem, where county and national forest roads lead to the old mining town of Jawbone Flats and the surrounding wilderness.

Scott Fogarty worked closely with Atiyeh on the Opal Creek preservation effort. The crusty obstinance that was part of Atiyeh’s character served him well in the two-decade effort to save the area.

“He is a true Oregon hero who was vilified by the timber industry,” Fogarty said.

The Beachie Creek Fire is just one of several enormous wildfires that have charred hundreds-of-thousands of acres from Lincoln City to outside Estacada to Talent in southern Oregon.

Atiyeh, nephew of the late Gov. Vic Atiyeh, grew up around Jawbone Flats. He helped family members operate a mine in the area. But when the U.S Forest Service made plans to log the old growth along the pristine stretch of Opal Creek near Brietenbush, Atiyeh fought back.

It became a pivotal moment in the history of Oregon’s environmental movement and resulting timber wars.

Opal Creek “meant everything to him,” said Hillary Clements, Atiyeh’s ex-wife. “He spent his whole life up there. He didn’t do it alone. But maybe he was a catalyst. He certainly had the passion and the love.”

Atiyeh and others convinced U.S. Sen. Mark Hatfield that the area deserved protection. Federal legislation protecting the creek was passed in 1996.

The Beachie Creek fire appears to have already passed through Opal Creek. The fire started near the confluence of Beachie and Opal creeks, just two miles from Jawbone Flats, home to an old mining camp and the Opal Creek Ancient Forest Center.

Staff at the center evacuated Friday, as smoke filled the air and ash fell from the sky, the organization announced on Facebook.

Earlier in the week, the Ancient Forest Center wrote on Facebook: “We have no news as to whether Jawbone Flats is burned or safe or anywhere in between. Right now, we continue to choose hope.”

Joanie Schmidgall, a public information officer for the Willamette National Forest, said while places like Opal Creek are within the fire perimeter, it’s impossible to know the extent of the damage.

Fogarty said he’s reasonably confident some portions of the forest survived. The ancient trees in the area have cleary survived multiple fires over the years judging from the scorch marks on their trunks.

“We really don’t know how the fire fared,” Schmidgall said. And while it doesn’t look good, “it doesn’t mean that everything is scorched.”

The old-growth forests of Opal Creek might actually fare better than most. With thick bark and high branches, the old Douglas firs are especially fire-resistant, Schmidgall said.

Opal Creek is thought to have survived two previous wildfires, in 1550 and 1835, according to the Ancient Forest Center. Many trees in the area are hundreds of years old, and the oldest, a 270-foot Douglas fir, is thought to be 1,000 years old.

Friends and family had urged Atiyeh to leave when the fire began to expand.

“By Friday, it had gotten to 300 acres and I called him,” Fogarty said. But the fire was still miles away. Beachie Saddle is probably 30 miles or more from Atiiyeh’s house. “It wasn’t like he was super-nervous.”

They haven’t heard from him since then.

The Little North Santiam flowed right by his house. Clements and Fogarty wonder whether Atiyeh could have made it to the deep pool that is nearby.

“If anyone could have survived, it would be George,” Clements said. (Atiyeh survived a plane crash earlier in his life.)