An Oregon fire chief has revealed that she broke down as she told her husband and two sons that they lost their homes to a wildfire as she battled another blaze.

She left her Vida home around 8.30pm to respond to a downed power line. The fire quickly spread, prompting her to call local departments for help.

By 1am, Plews issued a level 3 evacuation order for Blue River, Vida, Nimrod and Leaburg along a 20-mile stretch of the McKenzie River east of Eugene-Springfield, according to OregonLive.

Plews said she then tried calling her husband, Eric Plews, but was unable to reach him. She eventually got one of their sons on his cellphone and told him: ‘Get in your car and get out of there.’ 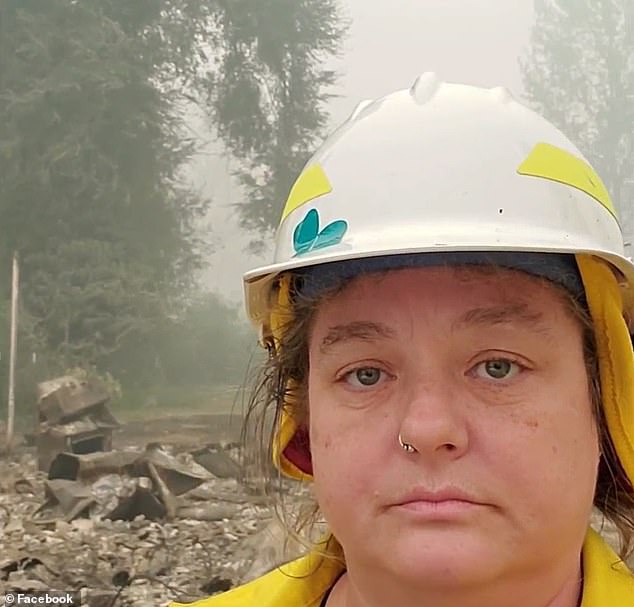 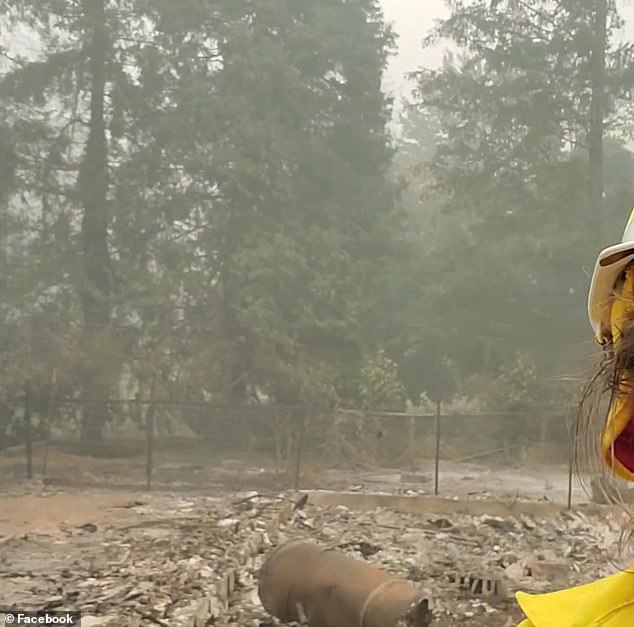 She left her home to respond to a downed power line and said the fire it caused quickly spread, making her issue a level 3 evacuation order within a couple of hours. ‘I not only have my life to put back together, I also have a fire department to put back together,’ Plews said 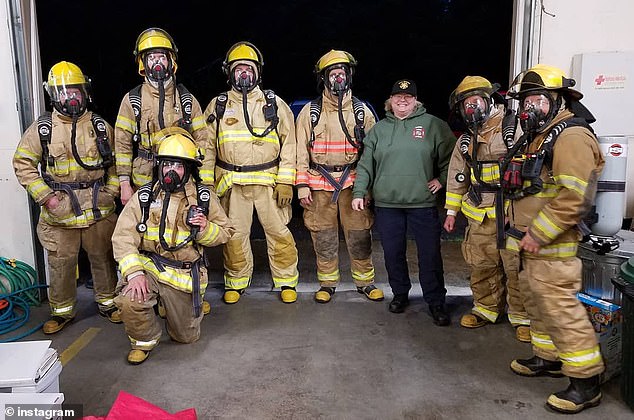 Eric Plews and their two sons then scrambled to grab items they would needed before racing outside to knock on the doors of their neighbors, yelling: ‘We got to get out!’

Chief Plews said it wasn’t until 24 hours later that she learned both of her homes had been reduced to rubble.

She told OregonLive: ‘My first thought was, “How do I tell my family?” I didn’t know where my family was.’

When she finally got in touch with her husband to break the news, she said through tears: ‘I’m really sorry everything is gone.’

He broke down as well, saying: ‘We literally lost everything. We had two houses there. They’re just gone.’

But he also told his wife that ‘we’re all safe. You’ve got to stay safe. We’ll rebuild’.

She said many people on her team worked a week straight with only a 24 hour rest period by Sunday when the blaze had burned 161,872 acres and was only five per cent contained.

In a Facebook post on the department’s page Sunday, Plews wrote: ‘I do not know what the future holds or how to navigate this but I am taking one tiny shaking uncertain step at a time and I ask only that you all do the same.

‘Be patient. Be kind. Hold the ones you love. We have to do this together.’ 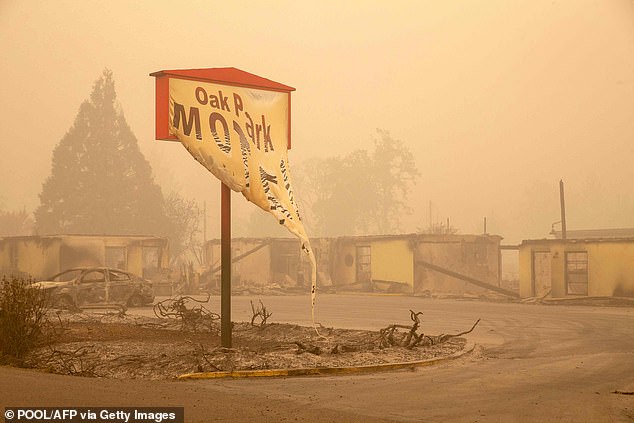 Two of Oregon’s largest fires that continue to threaten communities in Clackamas and Marion Counties remained completely uncontained Sunday, but more favorable weather and an easing of some evacuation warnings in areas indicate an improving situation 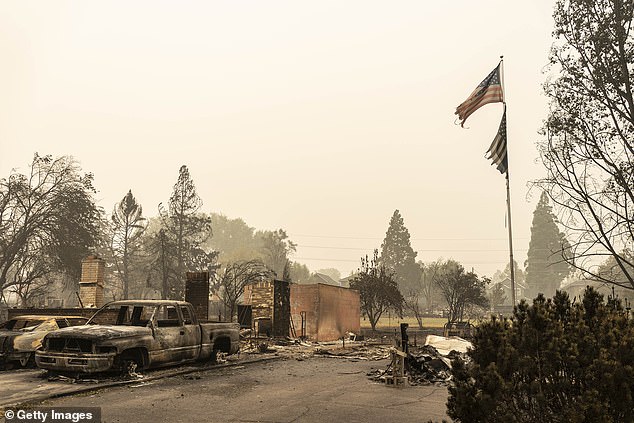 One of the large fires ravaging the area, the Riverside Fire was still within half a mile of the small city of Estacada, but the spread of the blaze has slowed. A destroyed home is seen in Talent, Oregon, after the wildfire tore through the area on Sunday 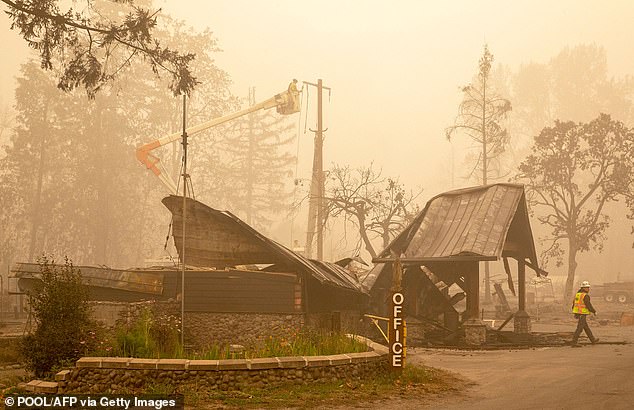 Workers continue to repair the power system after flames from the Beachie Creek Fire burned through Fishermen’s Bend Recreation Site in Mill City, Oregon on Sunday

Her message continued: ‘We will come out the other side stronger and more resilient. We have all that matters. We have each other.’

A high school friend started a GoFundMe page for Plews and her family. As of Monday afternoon, the account raised more than $53,000.

The US Forest Service said weather conditions in areas of Oregon, which include mist and favorable wind, was helping to limit the rapid spread of the fires and dispersing smoke and fog to better firefighting conditions.

Two of Oregon’s largest fires that continue to threaten communities in Clackamas and Marion Counties remained completely uncontained Sunday, but more favorable weather and an easing of some evacuation warnings in areas indicate an improving situation.

One of the large fires ravaging the area, the Riverside Fire was still within half a mile of the small city of Estacada, but the spread of the blaze has slowed.

In Marion County, where firefighters have been battling the Lionshead and Beachie Creek fires, evacuation levels of several cities were reduced during the weekend.

People in central and northeast Oregon, including in Eugene, Portland and Salem, continued to face hazardous air quality Sunday.

The Oregon Department of Environmental Quality reported Air Quality Index numbers that were off the chart.

Air Quality Index is considered hazardous between 301 and 500. Portland´s index is currently at 426.

Values above 500 – which two cities, Madras and Roseburg both reported having – are beyond the index’s scale.

Officials advised people to stay indoors and that the low visibility, caused by fog and smoke, is creating hazardous driving conditions.

In Salem, where the Air Quality Index is 394, a dense smokey haze that clouded roads and homes made it difficult to see further than 50 yards ahead.

The National Weather Service in Portland reported that rain is expected Monday night, which could help clear smoke in Oregon.