The former national president of Australia’s most dangerous outlaw motorcycle gang was gunned down in 2018, outside a Fitness First gym in Rockdale, Sydney, after a work out.

The convicted criminal was 37 years old and left behind a widow and two children.

Glimpses of his short but troubled journey can be seen in rare police photos that reveal tattoos etched across his body, like a map to a treasure nobody wants. 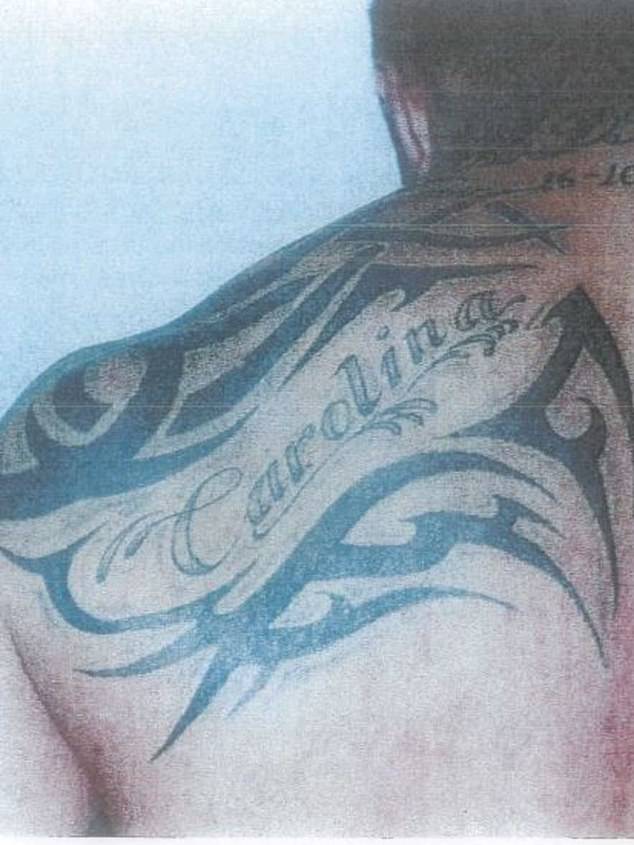 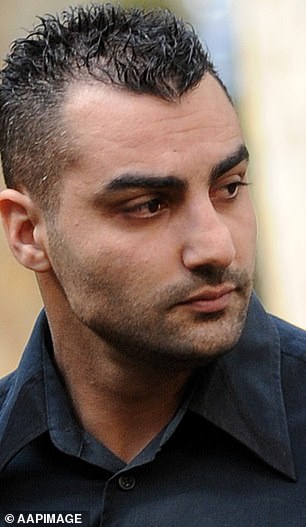 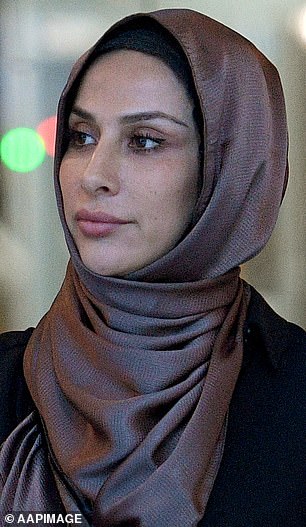 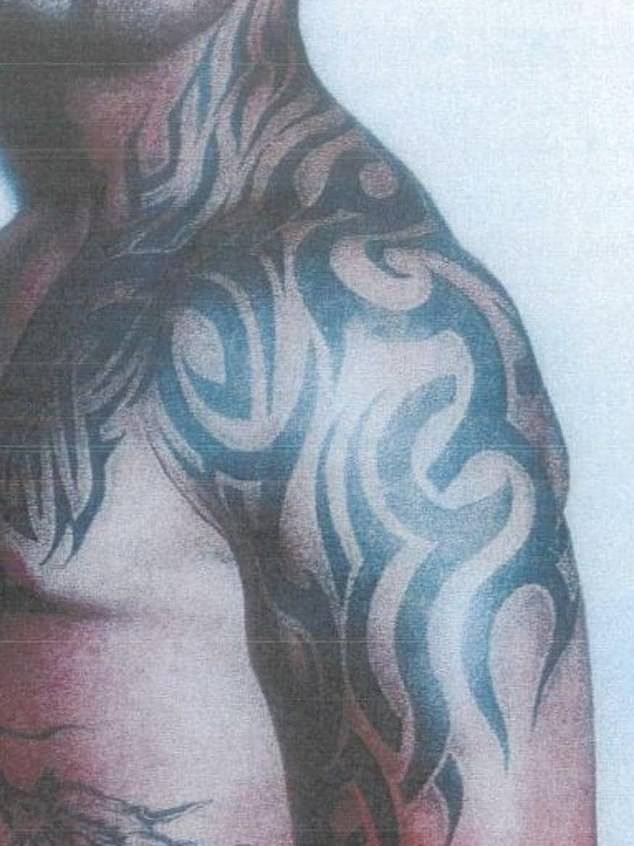 Pictured: Hawi’s torso. These primitive tribal curves were made popular by George Clooney in the 1996 vampire film From Dusk Till Dawn. ‘Everyone was getting them’ said one tattoo artist

The photos were taken in April 2009, after Hawi, then-aged 28, handed himself in to police after a savage gang brawl at Sydney Airport between dozens of Comancheros and Hells Angels bikies.

Shocked passengers in terminal three watched as Hells Angels associate Anthony Zervas had his head bashed in with a silver bollard, repeatedly, until he died.

Hawi gave himself up to police who began the forensic procedure of documenting his body ink and any significant markings such as birthmarks or scars for the police intelligence database.

Hawi was jailed for his role in the killing, but his murder conviction was quashed in 2014.

Instead he pleaded guilty to manslaughter and was sentenced to a minimum of three and a half years, and was released in 2015 after time served was taken into account. 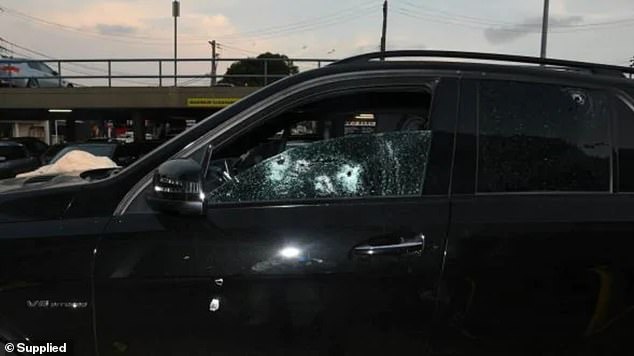 Mahmoud ‘Mick’ Hawi’s bullet-raddled black Mercedes, in which he was gunned down in February 2018, his life destroyed minutes after a work out in Rockdale, Sydney

The symbols punctured across Hawi’s torso were not just patterns photographed by police for identification.

Symbols are tokens of tribal membership, reminders of fealty and an expression of inner identity.

Mahmoud Hawi, a Muslim, was born in Beirut Lebanon in 1980, and moved to Australia with his parents, brother and three sisters when he was just five years old.

Commemorated on his right bicep is a tattoo of a cedar tree – the national emblem of Lebanon, where he was born.

In a somewhat confusing jumble, the tree appears on top of a sword.

A weird skinny tower spikes up from the bicep to the shoulder. 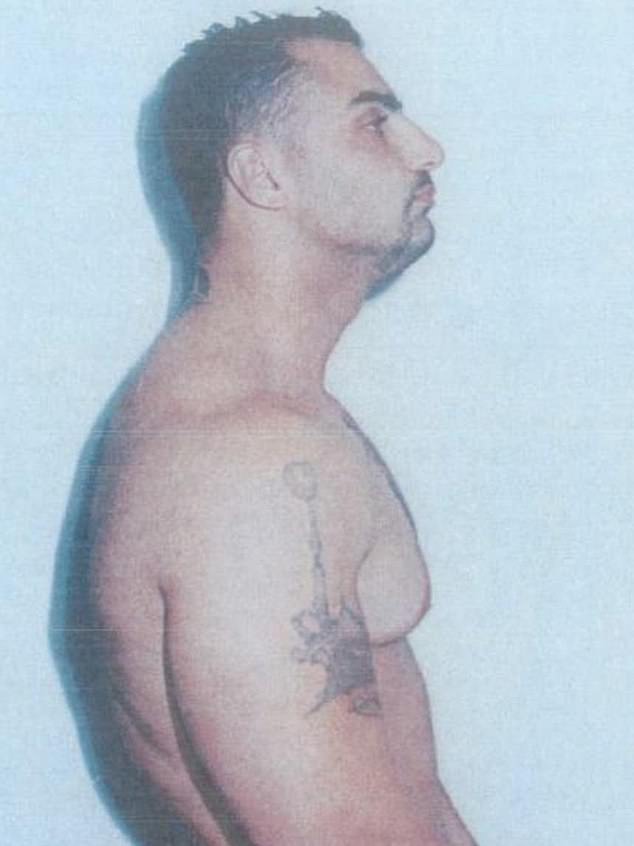 A confusing jumble of symbols: a Lebanese cedar tree over a sword and a tower topped by the crescent moon and star of Islam, originally the symbol of Constantinople prior to its conquest

On top of the tower is a crescent moon and star.

This symbol originally adorned the city of Constantinople, the capital of the Greek-speaking eastern half of the Roman Empire.

When the Ottoman Muslims conquered Constantinople in 1453, Sultan Mehmed II took the symbol for his own flag and it is now a symbol of Islam.

This tattoo is faint and faded, most likely drilled into Hawi’s skin when he was younger and thinner, before he bulked his muscles up.

In the small of Hawi’s back, where a ‘tramp stamp’ might be on a girl, stretching from hip to hip, are the letters: Comanchero.

The ink is a mark of loyalty to the organised crime gang, a useful reminder of the permanence of his membership, and an instant warning to everyone who saw it.

The Comancheros started off as a motorcycle club in 1966, founded on the NSW Central Coast by former soldier Jock Ross and four motorbike enthusiasts.

The membership shifted from being bike-riding white yobbos to a multicultural organised crime gang increasingly involved in the drug trade after rapid recruitment of Middle Eastern members in the late 1990s.

A split in the group appeared, with the young disrespecting the old.

Just four years after joining the Comancheros, Hawi became national president after bashing Jock Ross, aged about 60, and taking his club colours and his Harley Davidson. 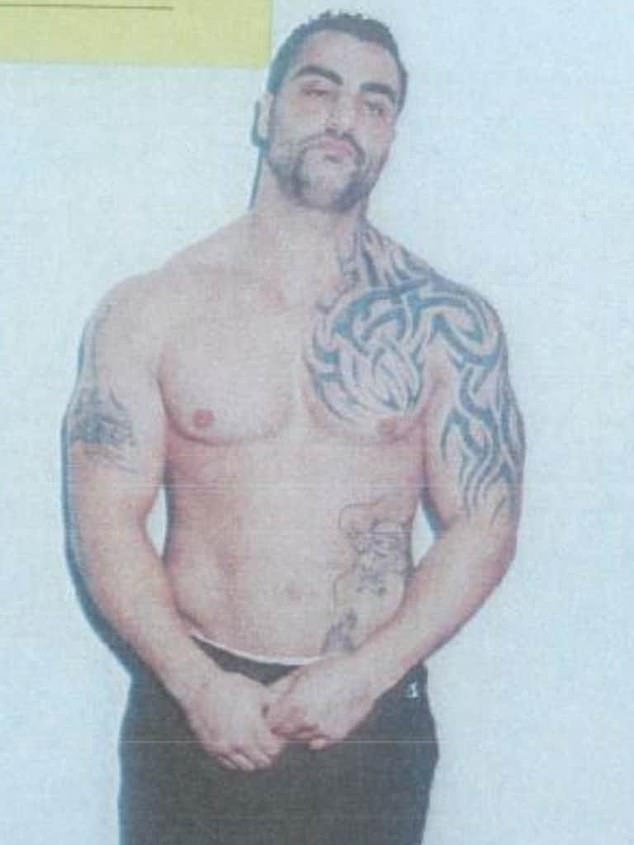 A Chinese luck dragon, symbol of power and fortune, rises from Hawi’s belt. Hawi’s luck ran out in February 2018 when he was shot to death outside a gym

On the back of Hawi’s left shoulder stretches a name in huge, ornately curving letters: Carolina.

Hawi met Carolina when he was 12.

He went to Hurstville Boys High. She went to Bethany College, the girls’ school across the road. 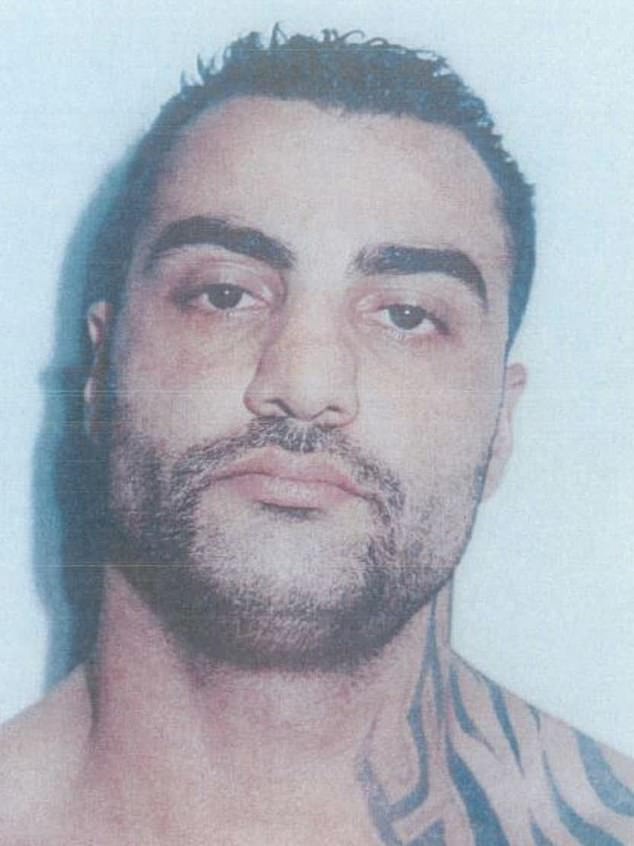 These photos were taken in April 2009, after Hawi, then 28, handed himself in after a Comanchero-Hells Angels gang brawl at Sydney Airport in which a man was beaten to death

Hawi began dating Carolina when he was aged 15, and married her in 2002.

The high-school sweethearts had two sons together.

After Hawi, 37, was gunned down outside a Fitness First gym in Rockdale, Sydney, Carolina was granted permission to have sperm extracted from Hawi’s dead body at the morgue.

She wanted to freeze his sperm for future use, so she could have more of his children.

Hawi’s funeral was held at the Al-Zahra mosque in Arncliffe, Sydney, a week after he was killed, at a ceremony without any visible club patches and colours.

Carolina’s name on the left shoulder blade was framed in bold jagged-inked curves that interlocked down Hawi’s neck to his left nipple.

It patterned his upper trapezius down to his left bicep in a primitive and savage pattern not specific to any ethnicity.

According to one Surry Hills tattoo artist quoted by the Daily Telegraph, everyone was getting similar tattoos in the late 1990s, mimicking George Clooney’s character from the 1996 vampire film From Dusk Till Dawn. 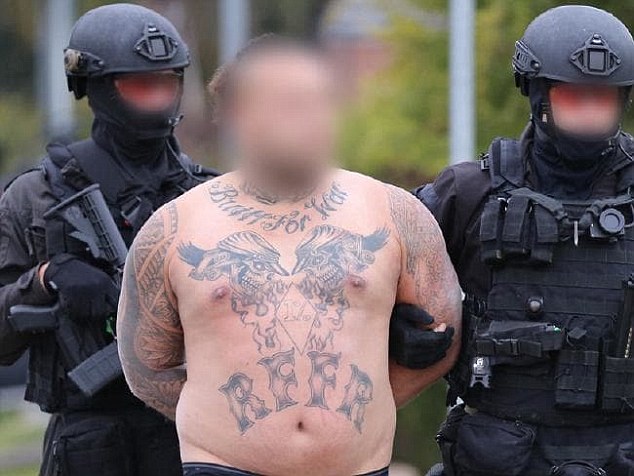 RFFR appears in enormous letters above this bikies jelly belly. It stands for ‘Rebels forever, forever rebels’ and cannot be used without authorisation from the Rebels MC

On the back of Hawi’s neck, at the base of his skull, his son’s name is scrolled above his birth date in 2003.

In Chinese culture, the dragons traditionally represent auspicious and potent powers and control over the weather and water.

Hawi, however, chose a high-risk life as national president of an organised crime gang. No amount of blue ink punctured into lucky dragon shapes could preserve him. 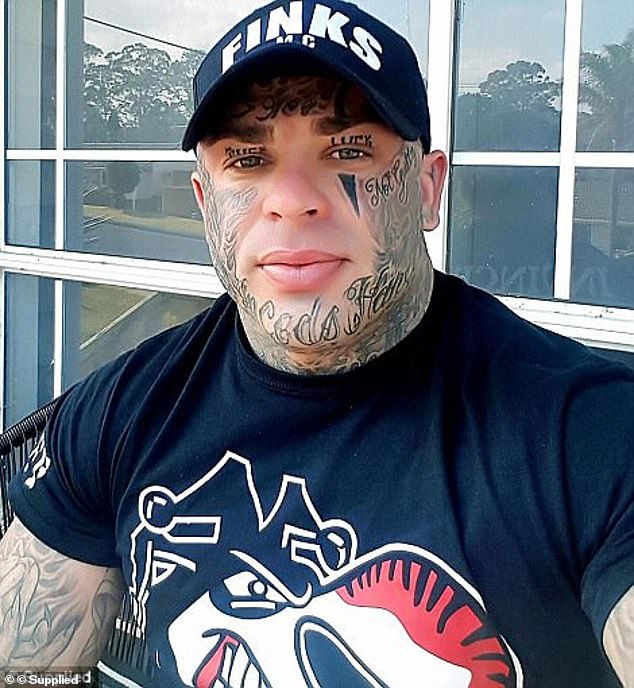 Finks bikie Troy Fornaciari (pictured) has ‘tuff luck’ on his eyelids. Fornaciari’s lawyer told a Woollongong court in 2019 he wanted to remove the facial tatts and go straight

His luck ran out in February 2018 as he sat in his shiny black Mercedes outside the Rockdale gym where he had just worked out, bullets tearing through his tattoed muscles.

Bikie culture encourages flamboyant tattoos, which can serve as an early warning sign for people who dislike glorifying criminality.

The large letters RFFR emblazoned across the wobbly beer-belly of one shirtless bikie pictured being arrested can be revealed to stand for ‘Rebels forever, forever rebels’.

Rebel MC ex-president Alex Vella revealed in 2018 that members are banned from using the words ‘RFFR”, ‘Rebels MC’ or ‘RMC’ without permission.

Once clean-skinned, Fornaciari sports ink on most areas of his face, including the words ‘tuff luck’ on his eyelids and ‘not guilty’ on his cheek.

In 2019 his lawyer told Wollongong Local Court that he was now embarrassed by his facial tattoos and wanted them removed so he could go straight.