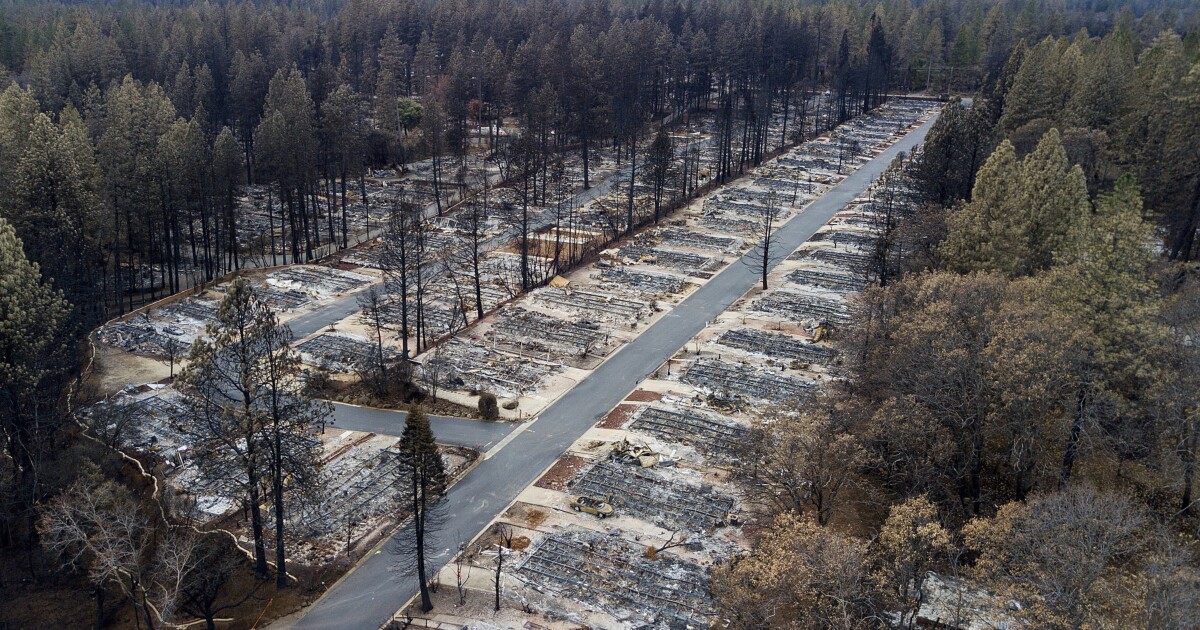 Several Northern California fires are now threatening communities in Butte County, including Paradise, which was largely destroyed in 2018 in what was the worst fire in California history.

The North Complex fire, which includes the Bear fire, spread rapidly overnight, stunning fire officials with its speed and ferocity. By morning, it had consumed an additional 80,000 acres, bringing it to more than 254,000 acres, and extending its potential threat to the towns of Paradise and Concow, which were devastated in the 2018 Camp fire.

The Camp fire killed 85 people and destroyed more than 13,900 homes. Pacific Gas & Electric Co. acknowledged that its poorly maintained equipment sparked the blaze and pleaded guilty to 84 counts of involuntary manslaughter related to the fire.

Jay Kurth, incident commander for the U.S. Forest Service, said the agency was still working Wednesday morning to “figure out where the fire footprint really is” because of the extreme overnight activity.

Kurth added that weather conditions improved with daylight, including a softening of winds, but that “extreme conditions” left the situation volatile.

Paradise and Concow were placed under evacuation warnings, and orders were issued for other areas around Lake Oroville.

Frank Martinez, 55, lives in the Mt. Ida neighborhood of Oroville, at the base of the mountains, and has numerous friends in Berry Creek. Tuesday afternoon, as the Bear fire closed in on that town, more than two dozen relatives and friends fled their homes there and headed for Martinez’s 1.5-acre spread as a refuge. Martinez said that by that time, flames were already threatening a bridge on the evacuation route, backing up about 100 cars, and the caravan became separated, with some stuck on the road as Cal Fire worked to clear it.

Just hours after some of his friends reached his house, news came that Martinez might have to leave as well as the fire grew. Around 10 p.m., “it was like all the sudden someone turned on a switch” and the wind became “crazy bad,” he said.

By 1 a.m., the evacuation warning for Martinez’s neighborhood turned into an order, forcing him, his eight rescue dogs and caravan of refugees to head into more urban areas of Oroville. He has been told his house has been destroyed gone, he said Wednesday, “but I can’t believe it until I see it.” He knows of at least about 25 friends who lost homes in Berry Creek, and said the school, church and local bar also burned.

In 2017, Martinez was informed that he had lost his home in the Wall fire, but that turned out not to be true, though flames came just two feet from his propane tank before firefighters beat them back, he said. In 2018, when the Camp fire destroyed the nearby town of Paradise, his Berry Creek friends again took shelter on his property. Though 88 people died in the Camp fire, making it California’s most deadly blaze, Berry Creek was spared. “We are veterans of this,” he said.

So, for his house, “I am keeping my faith and I’m keeping my hope alive,” he said. “Basically we don’t know until they lift the evacuation orders.”