The parents of a 15-year-old boy shot in the face allegedly by a former school friend he had fallen out with rushed from their home and fought to save their son after hearing the gun blast.

The year 11 pupil is critical in hospital after being shot in the jaw at close range on his way to Kesgrave High School with what witnesses have described as ‘a long bore rifle’.

A neighbour who also ran to help the boy after hearing his screams has described the horrific scene as ‘like a war zone.’

The 77-year-old, who asked not to be named, said the victim’s parents comforted him as they waited for an ambulance to arrive.

‘It was like a war zone,’ said the neighbour. ‘I was in my house and heard a loud bang and looked out to see what had happened. 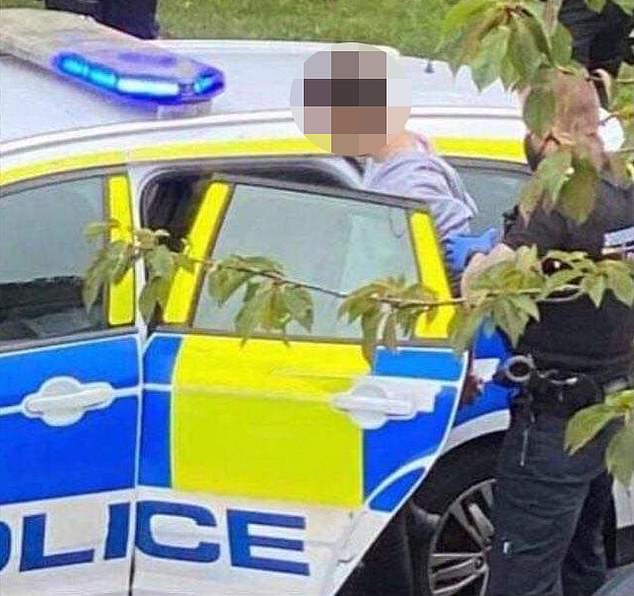 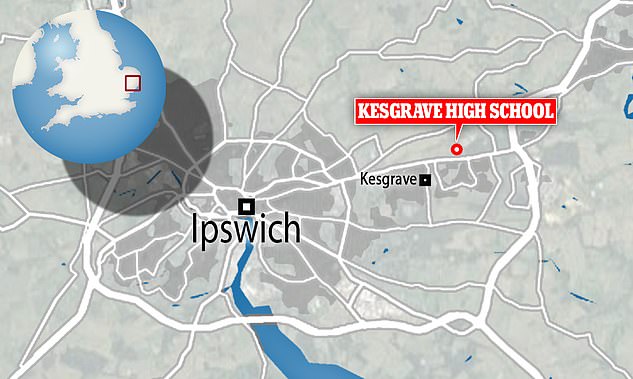 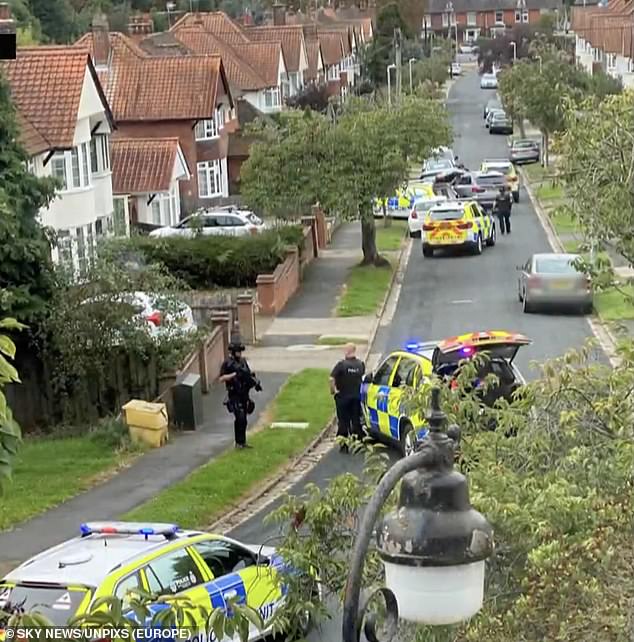 The alleged attacker – believed to be a former friend – is believed to have hid in a back garden behind an animal enclosure just moments after the attack in Kesgrave, Suffolk

‘I ran out to see if I could help and was offering to perform CPR but it was not needed.

‘People were on the phone telling the ambulance to hurry up. It was awful to see. From my medical experience I would say he will have life changing injuries.’

A 15-year-old boy has been arrested on suspicion of attempted murder.

The two teenagers were said by a school source to have been close friends but in recent weeks had a falling out.

The neighbour said he saw a long bore rifle at the scene.

He said he had spent two hours with police giving a detailed statement of the events. 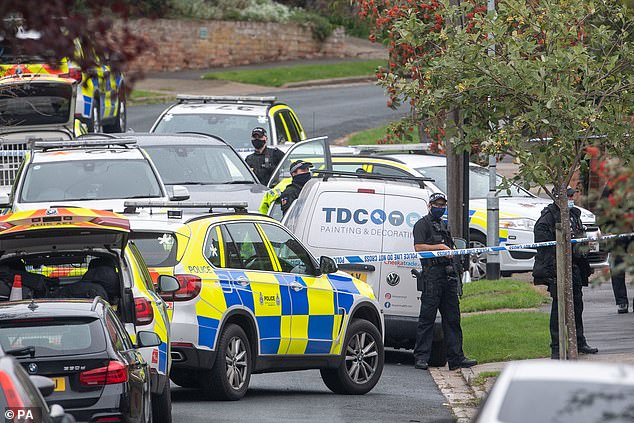 The suspect was pictured being hauled into a police car in handcuffs less than six miles from the shooting in Kesgrave. Pictured: Police outside a property close to the scene of the shooting 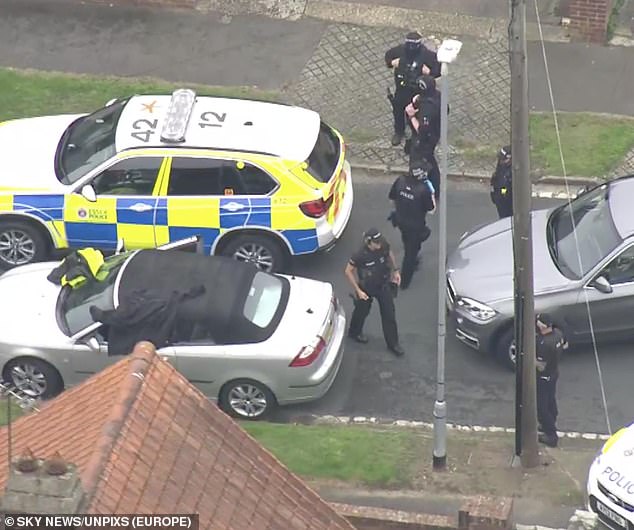 A witness said the boy was not perturbed by the armed officers who rushed to his car – which he was seen driving moments before – to arrest him. Pictured: Police stopping a convertible car. It is unclear if this car is connected to the shooting

Officers using a metal detector searched pathways and driveways for fragments of the bullet.

The victim remains in a critical condition after being airlifted to Addenbrookes Hospital in Cambridge.

The shooting happened at 8.40am in an upmarket area of Kesgrave, near Ipswich, Suffolk. Paramedics spent 90 minutes battling to help the boy before he was airlifted to hospital.

Friends described the victim as a ‘lovely lad’ and a ‘normal kid’ who enjoyed being a Scout and music.

It has been claimed the two boys used to be friends but had fallen out.

Two hours after the attack, armed police pounced on the suspected gunman in another part of Kesgrave. Residents described their shock as a dozen firearms officers swooped with dogs.

The boy was said to be found in a convertible car belonging to his father outside a large detached home.

The unnamed victim had been returning to school for the first time since lockdown when he was blasted in the jaw, according to witnesses.

Police have confirmed a weapon has been recovered.

Superintendent Kerry Cutler: ‘We have arrested an individual that we believe is involved in the incident and we also recovered a weapon.

The suspect, who is said to be from the Woodbridge area, was arrested by armed police on suspicion of attempted murder of the Kesgrave High School pupil.

‘Everybody is shocked, Kesgrave is on the outskirts of Ipswich… this is not something we’ve seen in that area before and people will be impacted by it.

‘The investigation goes on and we’re still appealing for anybody who saw anything or has any information to come forward.’

Earlier this morning a neighbour who witnessed the shooting said the aftermath of the shooting was like a ‘war zone’ and he heard an ‘enormous bang’.

He revealed the victim’s fraught parents helped the lad after he was shot outside his home, with a ‘long bored gun’ which he saw on the floor .

The neighbour said: ‘As far as I’m concerned there are two families torn about in more ways than one, I’m sure the police will get to the bottom of it.

‘The boy’s parents came out and tended to him, they were very distraught, nothing like this ever happens in the estate.’

Last night police were quizzing a 15-year-old arrested on suspicion of attempted murder.

The shooting happened at 8.40am in an upmarket area of Kesgrave, near Ipswich, Suffolk.

Paramedics spent 90 minutes battling to help the boy before he was airlifted to Addenbrooke’s Hospital in Cambridge. 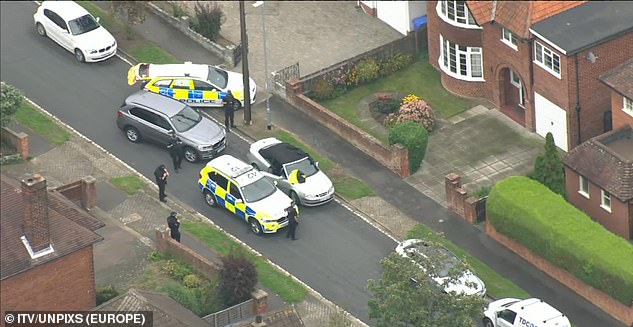 Police were seen stopping a convertible car. It is unclear if this car is connected to the shooting

Witnesses claim the arrested teenager – who witnesses say hid in a back garden behind an animal enclosure just moments after the attack – had been driving his father’s car when stopped by police outside an address five miles from the school. Pictured: Police outside a property in Ipswich on Monday

Friends described the victim, a pupil at Kesgrave High School, as a ‘lovely lad’ and a ‘normal kid’ who enjoyed being a Scout and music.

Witnesses claimed the two boys used to be friends but had fallen out.

Two hours after the attack, armed police pounced on the suspected gunman in another part of Kesgrave.

The owner of the property said: ‘I heard this huge commotion. Dogs barking, police shouting and smashing the windows of the convertible. He didn’t want to come out. There were ten to 12 officers with guns. He was totally surrounded. I saw him being detained by police about 11am.

‘He was wearing jogger bottoms and a sweat top. He didn’t say anything. I had seen that car earlier in the morning at about 9am parked outside my house but no one was in it then.’

The suspect was hauled into a police car in handcuffs. 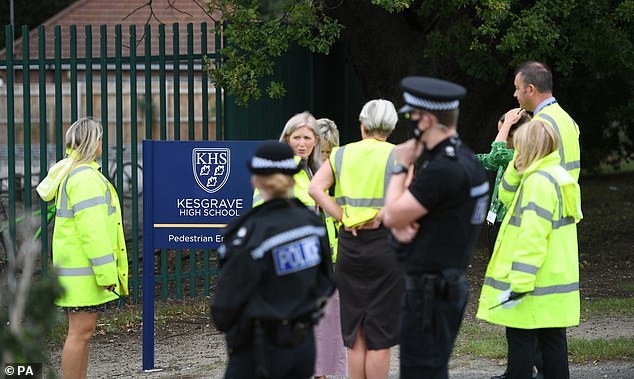 Police officers and teachers outside Kesgrave High School, the school attended by a 15-year-old boy who was shot 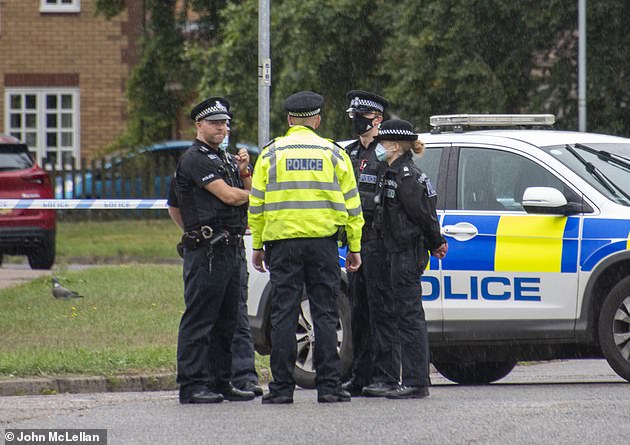 Suffolk Police confirmed that shortly before 1.00pm a teenage boy, whose age has not been confirmed, was arrested and is currently being questioned. Pictured: Police in Kesgrave on Monday 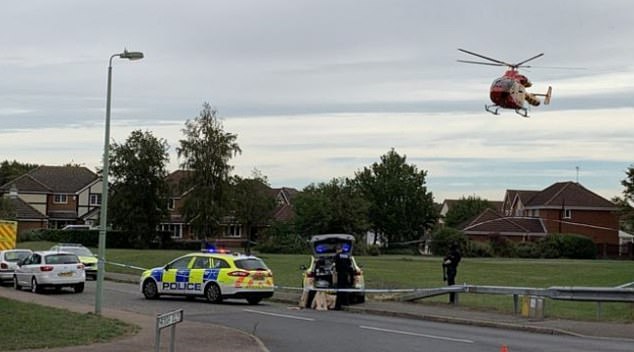 Police at the scene of the incident in Grange Farm, Kesgrave, which is to the east of Ipswich on Monday 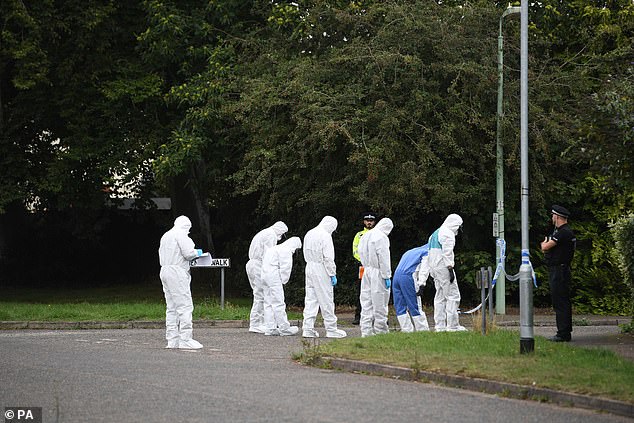 Police officers conduct a search on Friends Walk, Kesgrave, Suffolk, where a 15-year-old student from Kesgrave High School was shot on Monday

Officers were last night probing whether he drove to the scene before making his getaway despite not being old enough to drive.

Another resident said the suspected gunman hid in his back garden, but escaped before armed police arrived.

He said: ‘I got woken up because my dogs were going absolutely ballistic at the back of the house.’ He added that the suspect had a hooded top over his arm concealing whatever he was carrying.

Last night a friend of the victim’s family said: ‘He is completely normal – he does Scouts, has piano lessons and guitar. He’s literally a completely normal kid, straight-edged and genuine. It’s just so random to me. When I heard about it I thought it might be a random drive-by like in America.’

The victim’s parents, who work in the tech industry, and other members of his family were all said to be devastated.

One mother of a pupil at the school wrote on Facebook: ‘My daughter and friends were walking to school and heard what sounded exactly like a gunshot. Then lots of people [were] screaming and a lady saying ‘Run! Someone has been shot’. I had four terrified children come running back to mine.’

Last night police said they are not looking for anyone else over the attack.

Education Secretary Gavin Williamson told the Commons: ‘Our thoughts are very much with the young person, their family and the whole school community at this very difficult time.’