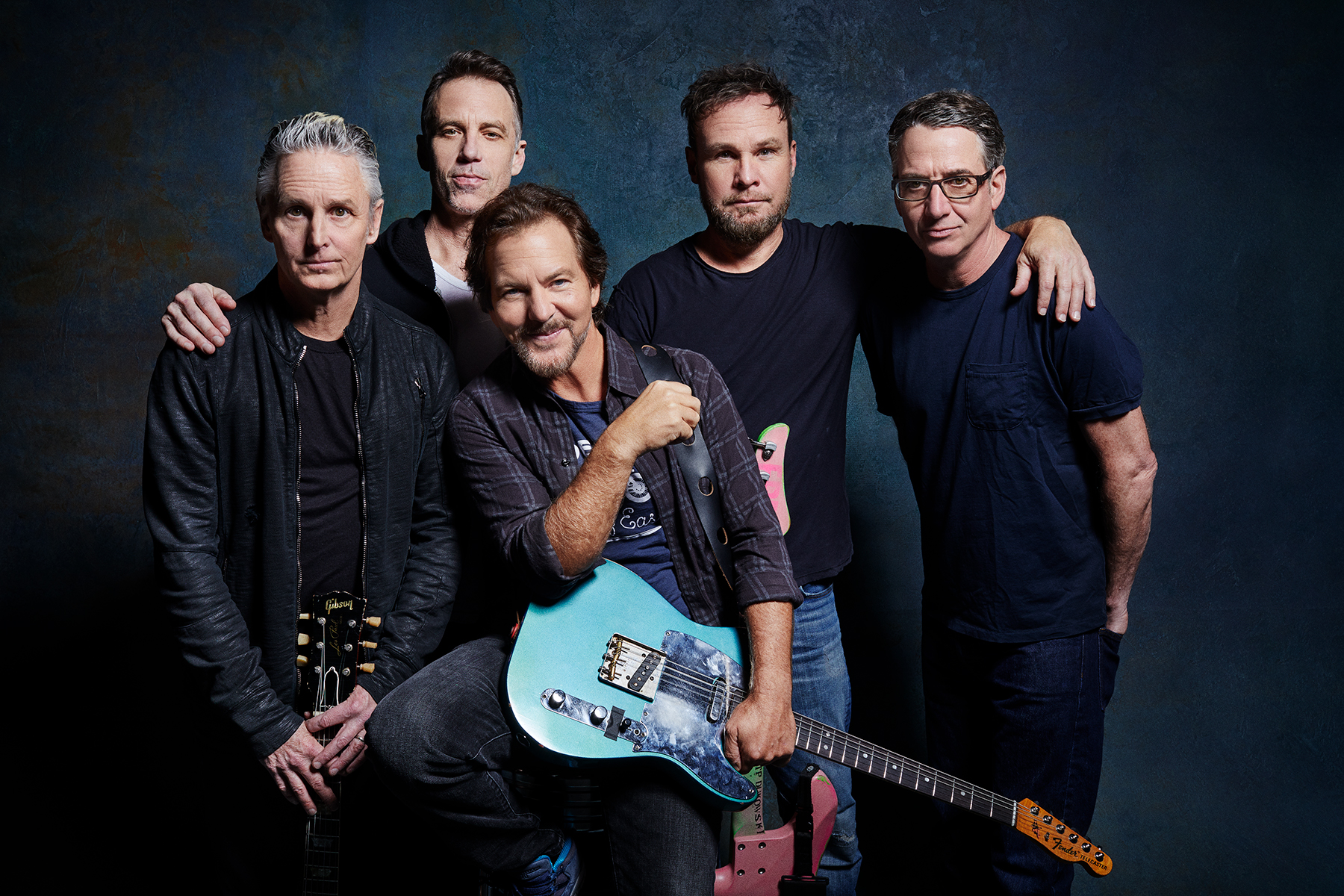 With less than two months to go until the presidential election, Pearl Jam are stepping up their efforts to engage fans in the process with the announcement of PJ Votes 2020. A big part of the initiative involves asking their audience to accept the Take-Three Pledge of “Vote by Mail,” “Recruit Three Friends” and “Don’t Wait.”

“It’s about reminding people that their voice matters and their voice can make a big difference,” says Pearl Jam bassist Jeff Ament. “Like a lot of things, if you find out that your good friends are doing something, you become more curious about it and more invested in it. What we found with voting is that when people you’re living with or your family or your best friends are voting, then you tend to vote as well.”

The band originally planned to spend 2020 on the road supporting their new album Gigaton, which would have given them a platform to expound their message from the stage and register fans at venues. “The last leg of that tour was supposed to be right around now in St. Paul,” says Ament. “We hand-picked a handful of states we thought were important to visit in middle of this and support candidates that we believe in in those states.

“In lieu of not being on tour and not being able to play Madison, Wisconsin and Milwaukee and Ohio and Pittsburgh and Philadelphia,” he continues, “these places we were really looking forward to going, we’re just going to reach out to people in these places and try to support some of these groups we really care about and just try to get people out to vote.”

In addition to the Take-Three Pledge initiative, the band is also partnering with leading national organizations like People For the American Way, the League of Conservation Voters as well as select regional organizations like Make the Road Pennsylvania to promote voting by mail. (Head to www.pearljam.com for more info or or text PJVotes to 52886.)

This sort of activism dates back to Pearl Jam’s earliest days, beginning with their 1992 Drop in the Park Seattle concert where they registered thousands of voters in the run-up the Bill Clinton/George H.W. Bush election. “When I started playing music, it was punk rock that gave me the confidence to play,” says Ament. “Part of the thing that inspired me so much was these bands were involved politically. It somehow gave the music more gravity and made it more meaningful.

“Pearl Jam was the first band I was ever in where it felt like everyone in the band was like-minded in that regard,” he continues. “They really cared about their community and they cared about the country and they cared about the world. I think it’s really been fuel for us this whole time. We travel so much and have friends all over the world that were fairly educated on things that are wrong in the world. Whenever we can, we try to get involved and help those people and maybe give them a little bit of our platform or use our shows or use our music mostly just to share information.”

The band’s political activism continued in 2000 when Eddie Vedder used the Pearl Jam stage to advocate on behalf of Ralph Nader’s long-shot campaign and even appeared at a number of the Green Party candidate’s rallies. In 2004, they were part of the Vote For Change tour that unsuccessfully attempted to deny George W. Bush a second term.

“One of my favorite tours we ever did was Vote For Change,” says Ament. “That’s why I was really looking forward to these fall shows more than anything.”

Their effort this time around isn’t as outwardly partisan as Vote For Change, but the band is making no attempt to mask their preference in the contest between Biden and Trump. “I think it’s so fuckin’ obvious right now who you should vote for that we don’t even have to talk about it this time around,” says Ament. “I think 16 years ago, maybe to some people Bush seemed like a guy you’d want to have a beer with. I think people based a lot of who to vote for on stupid things like that.

“The fires burning in California and the deregulation of environmental regulations is reason enough to go out and vote,” Ament continues. “We really have to put a finger in the dam right now and stop the bleeding with a lot of this stuff. Voting is the beginning of it.”

A particular focus this time involves motivating young voters to cast ballots. “I don’t know how old the average Pearl Jam fan is, probably 45,” says Ament. “We’re asking Pearl Jam fans to get their three kids to vote and their friends to vote. It’s an opportunity to do something for the first time for a lot of these young kids. It’s their first opportunity to be part of the democracy in this country and have a voice and change things.”

Ament has been quarantining in Montana and the state’s three electoral votes hardly make it a key battleground, but the bassist is still doing his part. “I just got two big American flags and two Ride With Biden flags that I’m putting on my pickup truck,” he says. “I’m going to start driving that around town.”

He hasn’t been in the same room as his Pearl Jam bandmates in several months, but they are still communicating with great frequency. “Once or twice a week, the band is having Zoom meetings to talk about different things we can do that we’re exited about,” he says, “like artwork and collaborating with artists.”

They have yet to play any socially-distanced or virtual concert, but that idea isn’t totally off the table. “We’ve talked through so many different ways,” says Ament. “I have friends that have done the drive-in shows. I think it’s been weird, but also some of those people have said it was so good just to be with the band again. We need to figure out how to do some of that stuff because this might last for another year or two.”

Next month will mark the 30th anniversary of Eddie Vedder’s fateful trip from San Diego to Seattle where he met his bandmates for the first time. As of now, there are no plans to commemorate it. “I think these last six months doesn’t count,” says Ament. “Whenever we get to play a show again, that’s when we’ll continue. Right now, we’re stuck at 29 years and six months.”