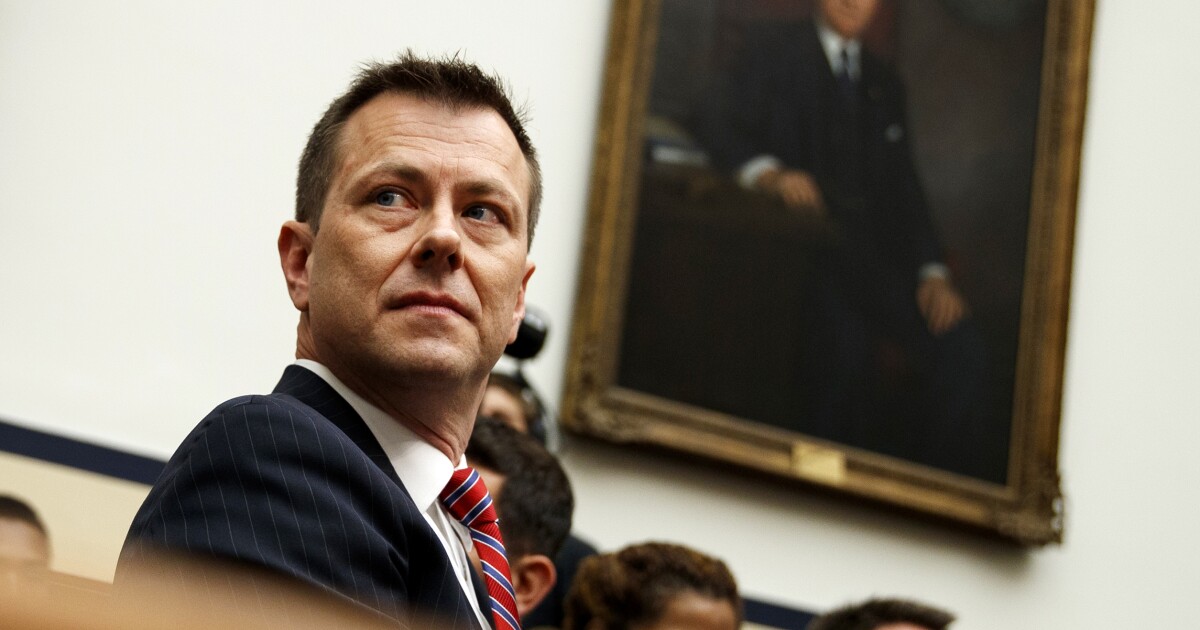 Fired FBI agent Peter Strzok denied that the bureau did anything “improper” during its Russia investigation.

Strzok, who is embarking on a media blitz for his new book, was asked during a Sunday Morning interview with CBS national security correspondent David Martin on whether the problems unearthed by DOJ Inspector General Michael Horowitz’s audit of the FBI’s investigation (including 17 “significant errors or omissions” in the Foreign Intelligence Surveillance Act process targeting Page) represented “sloppy work” or whether it was “FBI agents trying too hard to get something on” members of President Trump’s 2016 campaign.

“I don’t think at all that it’s anything improper. You get people who are overworked, who make mistakes — and don’t get me wrong — inexcusable mistakes,” Strzok said.

Attorney General William Barr, who selected Durham to look into the origins and conduct of the Trump-Russia investigation, has said that “the evidence shows that we’re not dealing with just mistakes or sloppiness — there was something far more troubling here.”

Strzok was removed from Mueller’s team early in his investigation and later fired from the bureau after his texts with former FBI lawyer Lisa Page, with whom he was having an affair, were discovered. In one Aug. 6, 2016, exchange, Page said, “Trump should go f himself.” Strzok responded, “F Trump.” Two days later, Page texted, “[Trump’s] not ever going to become president, right? Right?!”, and Strzok replied, “No. No he’s not. We’ll stop it.”

Horowitz discussed Strzok’s text messages in the report he put out in December.

“We concluded that Strzok’s text messages with Page indicated or created the appearance of bias against Trump,” Horowitz wrote, adding, “We did not find documentary or testimonial evidence that political bias or improper motivation influenced the FBI’s decision to seek FISA authority on Carter Page.”

Strzok oversaw the Page investigation from its start until January 2017. Horowitz asked Strzok, who made the decision to use British ex-spy Christopher Steele as a source in Crossfire Hurricane (which was the FBI’s counterintelligence investigation into links between the Trump campaign and Russia), and Strzok said that FBI Deputy Director Andrew McCabe “was briefed on Steele’s reporting and ‘okayed’ the Crossfire Hurricane team’s approach to use Steele in the investigation.”

Strzok wrote in his new book, Compromised: Counterintelligence and the Threat of Donald J. Trump, that then-FBI Director James Comey instructed the Crossfire Hurricane team to proceed “with deliberate speed” and claimed that “we also exercised extreme caution.” Strzok called it “a difficult balance to strike, and some of the risk we knew we were incurring manifested itself in the mistakes that … Horowitz later found.” Strzok defended the FBI, saying that “notwithstanding that valid criticism, and as the IG also found, the investigation of Page was appropriate and within the bounds of the law,” and “I am proud of how we handled it.”

Horowitz’s December report criticized the Justice Department and the FBI for a host of problems related to the FISA warrants against Page and for the bureau’s reliance on Steele’s Democratic-funded discredited dossier. Horowitz called the FBI’s explanations “unsatisfactory across the board” and testified to Congress he wasn’t sure if the errors were “gross incompetence” or “intentional.”

The FBI told the court this year that it was working to ”sequester” all the information from the Page wiretaps, and Christopher Wray testified to Congress that he was working to “claw back” that intelligence. The FBI director testified that the bureau likely illegally surveilled Page.

The FISA court criticized the handling of the Page applications as “antithetical to the heightened duty of candor.”

The FBI sought an “expedited FISA application” against Page, Horowitz wrote in his report, adding that Strzok said that “the team was not given an explicit instruction to finish the investigation before Election Day or Inauguration Day, but everyone involved understood the importance of moving quickly.”

Internal FBI communications show that Deputy Assistant Attorney General Stuart Evans of DOJ’s Office of Intelligence was hesitant about the Page FISA, and on Oct. 11, 2016, Strzok messaged Lisa Page that he was “currently fighting with Stu for this FISA” and that “the FISA will probably not go forward without a call from the [deputy director].”

Durham collected his first guilty plea last month from former FBI lawyer Kevin Clinesmith, who faced a false statements charge for altering a CIA email in 2017 that helped justify the continued wiretapping of Page by fraudulently adding that Page was “not a source” for the agency when the CIA had told Clinesmith and the bureau that Page was an “operational contact” for them.

Strzok touched on Clinesmith’s actions in his book, saying that “apart from one troubling instance in which an individual appeared to add information to an email used as part of a renewal application for the FISA warrant, the problems that the IG found were unintentional and reflect the increased risk that can occur when a small number of investigators do too much important work in such a compressed timeframe.” Strzok argued that “decades of experience with hundreds of FISAs convince me that the facts we understood about Page were more than sufficient to initiate the warrant.”

Former Deputy Attorney General Rod Rosenstein and his predecessor in that position, Sally Yates, both testified recently that they would not have signed off on the Page FISA surveillance if they knew then what they know now about the Steele dossier.

Strzok and FBI counterintelligence official Bill Priestap traveled overseas in 2016 to meet with people who had professional contacts with Steele “to help the FBI assess Steele’s reliability.” Some notes were positive, but also said Steele “demonstrates lack of self-awareness,” was “underpinned by poor judgment,” was “pursuing people with political risk but no intel value,” “didn’t always exercise great judgment,” “sometimes believes he knows best,” and was “reporting in good faith, but not clear what he would have done to validate.” Horowitz said relevant details about Steele’s performance weren’t shared with the DOJ and weren’t included in FISA renewals.

Declassified footnotes from Horowitz’s report indicated that the bureau became aware that Steele’s dossier might have been compromised by Russian disinformation, and FBI interviews showed Steele’s primary subsource undercut the credibility of the research.