More than two dozen protesters were arrested in Portland overnight after police declared an unlawful assembly during the 99th consecutive night of unrest in the city.

Crowds arrived at N Lombard Street to find cops in riot gear as well as Oregon state troopers waiting outside.

It marks the first time state police officers were back on the front lines after being withdrawn from the area early last month. 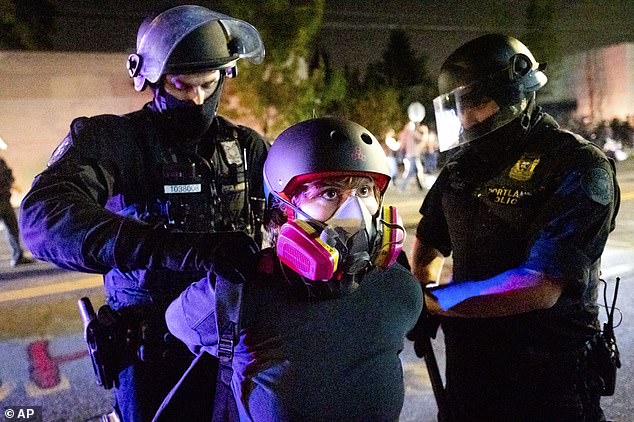 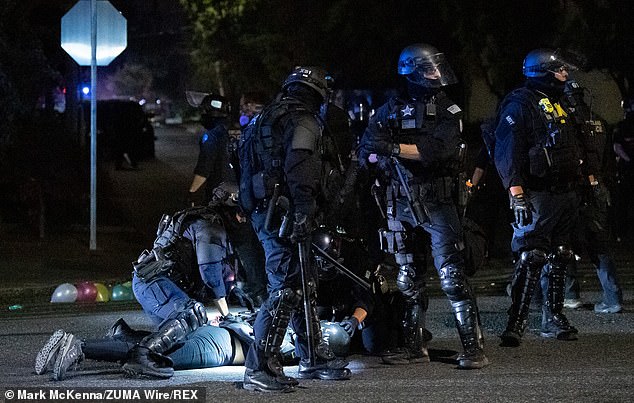 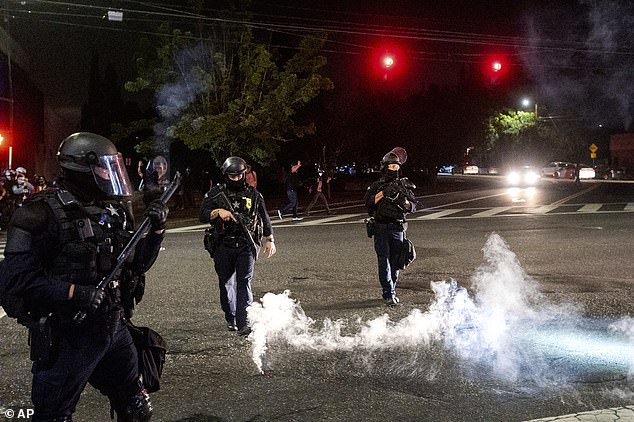 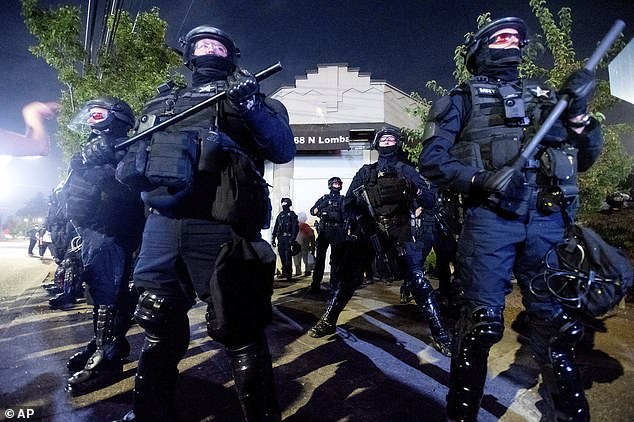 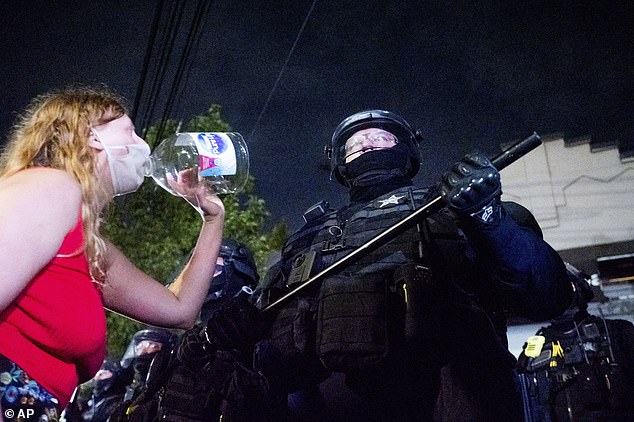 Police warned protesters to stay off the streets and private property, threatening them with citations, arrest, the use of tear gas and crowd-control agents.

The encounter led to a face off with officers, with protesters chanting and tossing balloons, Oregon Live reported.

Just before midnight, about two hours after demonstrators arrived, cops declared an unlawful assembly and began moving in on crowds, pushing people out of the area.

Police ran down the street, knocking people down and arresting those who they say were not following orders.

As some people were being detained, they were pinned to the ground and blood could be seen marking the street pavement. 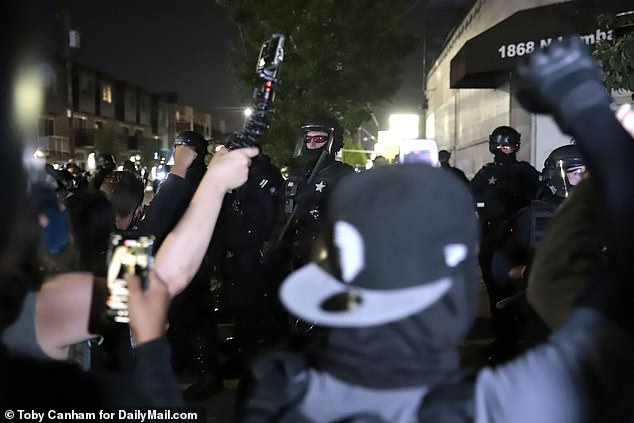 Crowds gathered outside the police union headquarters around 10pm where they were met with a wall of police including Mobile Response Team (MRT) members, state assets and armored vehicles 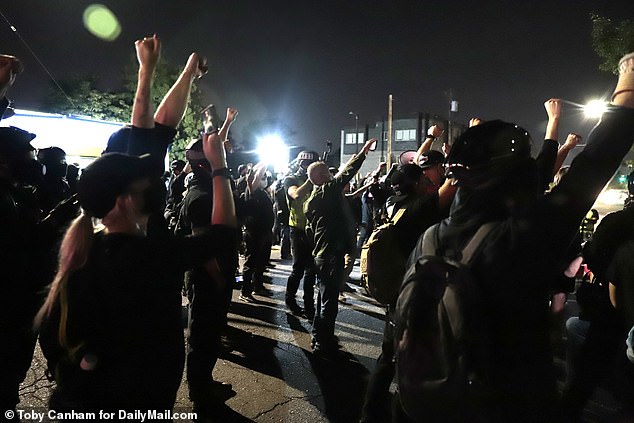 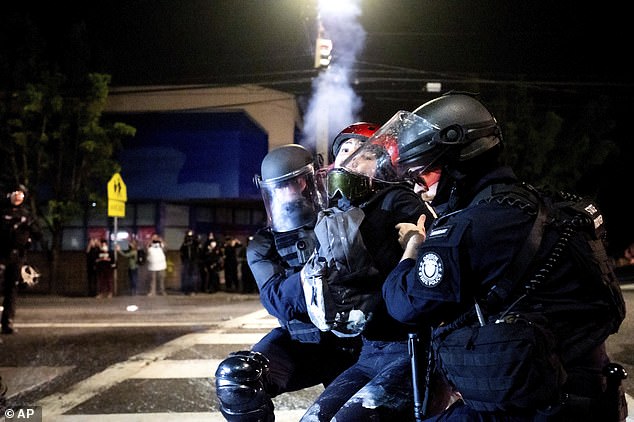 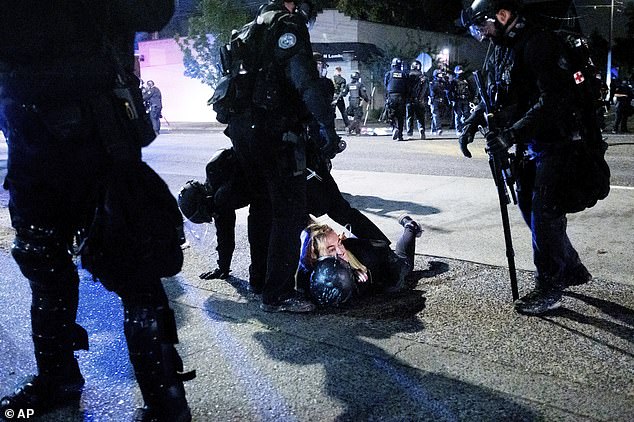 The Oregon city nears 100 days of demonstrations against racism and police brutality, which have at times turned violent

At least six people were seen being detained during the clash, according to Oregon Live.

Police on Saturday said they arrested 27 people, mostly on charges of interfering with law enforcement or disorderly conduct after not complying with orders to clear the area where they assembled and throwing items at officers.

‘Officers began to make targeted arrests and in some cases moved the crowd back and kept them out of the street,’ they said in a statement.

One arrested protester was injured with a ‘bleeding abrasion’ on her head, police said.

Demonstrations in Portland, which started in late May after the police killing of George Floyd in Minneapolis, are reaching 100 straight nights of protests that have been marked by vandalism and violence. 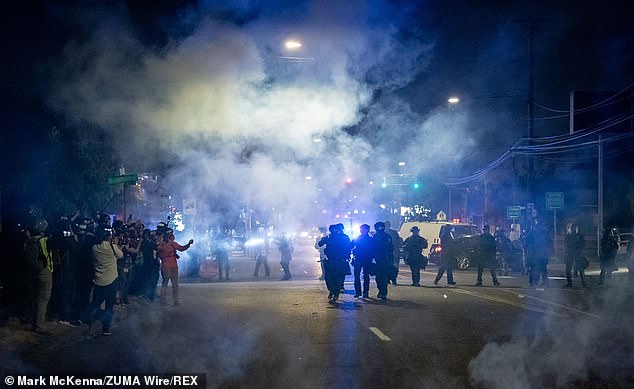 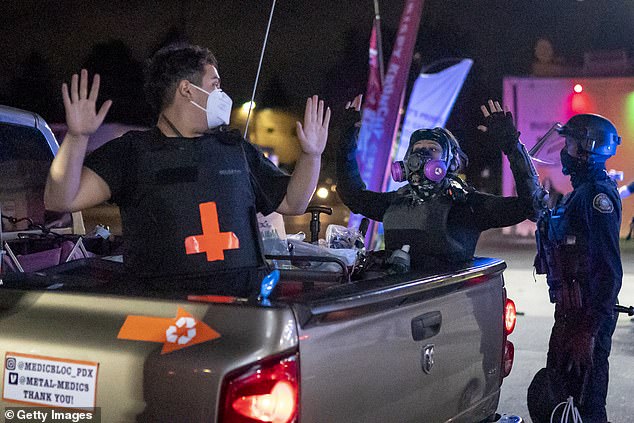 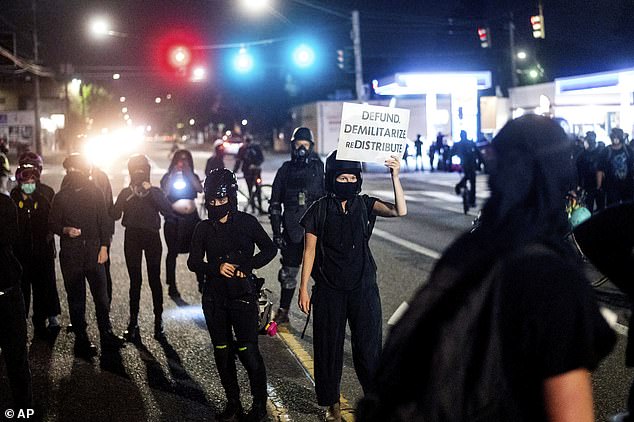 These have at times turned into clashes between demonstrators and officers, as well as between right- and left-wing groups.

The slaying of a right-wing Trump supporter, Aaron ‘Jay’ Danielson, shot and killed after he came downtown last weekend with a pro-Trump caravan of pickup trucks further roiled things in the liberal city.

Since Floyd’s killing, nights of unrest that increasingly targeted a federal courthouse prompted President Donald Trump to dispatch U.S. agents to guard the building in July.

His Democratic challenger in the November 3 presidential election, Joe Biden, has accused Trump of stoking violence with his rhetoric. 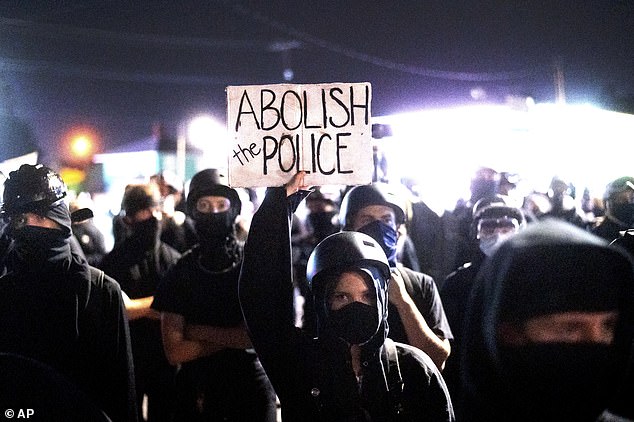 Anti-police protesters rally outside the Portland Police Association building .This weekend Portland will mark 100 consecutive days of protests over the May 25 police killing of George Floyd