A school principal has slammed the Queensland government for asking her to treat her students worse than prisoners by forcing them into solitary confinement for two weeks.

Linda Evans, the head of Fairholme College in Toowoomba, said the demand to make borders as young as 12 quarantine when they return from school holidays with their families interstate is inhumane.

‘We would not do that because, from a mental health perspective, to place a child in a room on their own for two weeks and place their meal outside their door constitutes solitary confinement. We don’t treat our prisoners that way we won’t treat our children that way,’ she told Sunrise.

The principal of a Queensland boarding school says the state government has told her that students who return from interstate holidays must be locked in their bedrooms for two weeks. pic.twitter.com/qJAAFxDtet

Mrs Evans slammed premier Annastacia Palaszczuk’s tough stance on borders, saying: ‘If we can’t approach the leader of our state and seek advice and seek empathy and compassion, I don’t understand why she is leading our state.’

The principal said the quarantine requirements were impossible to adhere to.

‘Our chief health officer has said that boarding schools will place those girls into quarantine within the boarding house,’ she said.

‘They must have their own single room and their own bathroom facilities.’

‘I don’t actually know any school in Queensland that would have 33 en-suite rooms where that would be possible. We don’t have those facilities.’ 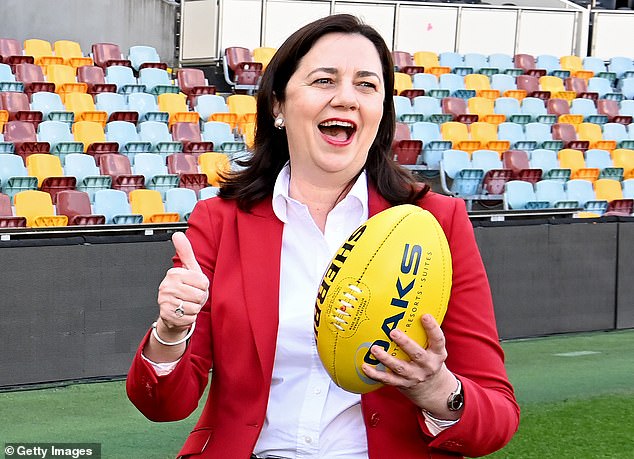 He will push for a ‘boarding school bubble’ that will allow children to return to their families, isolate at home, then go back to school with no quarantine required.

Should states open their borders?

‘This verges on cruel and unusual punishment belonging in Guantanamo Bay’, he said.

‘We don’t know the depth of the mental health damage that is done.’

‘They will come back and live in an individual room and bathroom and be fed a meal in their room for two weeks.

There are 1,614 boarders whose families live in another state, according to the Courier-Mail.