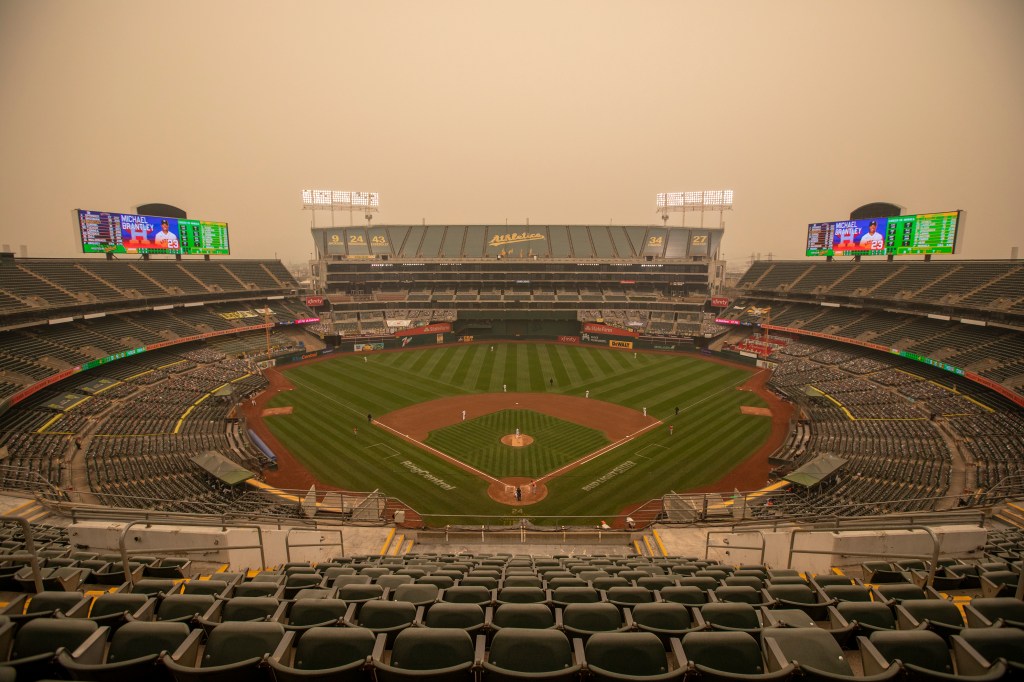 The smoky cloud cover that has enveloped the Bay Area — and the entire state of California — since Labor Day sent the air quality indexes soaring into the purple and curtailed visibility Friday morning as it hovered like a thick fog.

“It’s exceptionally dense,” National Weather Service meteorologist Drew Peterson said. “It’s blocking out the sun and allowing an even stronger marine layer and fog to move into the area. Unfortunately, that marine layer is filled with the smoke, and the smoke is mixing with the fog.”

The net result was official and unofficial air readings throughout the region that were shaded purple, or very unhealthy for everyone, and an extension to a Spare the Air alert issued by the Bay Area Air Quality Management District almost two weeks ago.

The alert now runs through Monday, putting the record streak for such days at 28. The streak has doubled the old record of 14, set while the Camp Fire was burning in 2018.

By 9 a.m., East Oakland had the worst air in the region, with the air district measuring the fine particulate matter at 247. Any mark over 200 is considered very unhealthy air for anyone to breathe.

The smoke also caused the cancellation of all horse racing at Golden Gate Fields in Albany.

In a social media post, the air district said conditions were not expected to improve Friday and that the “air quality may degrade as more smoke is expected to mix down to the ground.”

Light overnight winds allowed smoke to seep down from above the shallow marine layer, resulting in widespread Unhealthy & Very Unhealthy conditions. We do not anticipate conditions to improve today, and air quality may degrade as more smoke is expected to mix down to the ground. pic.twitter.com/I1wvhOhFNi

Readings by Purple Air, a company that measures fine particulate matter through sensors placed throughout the region, showed readings in the area above 300.

“As that happens, gravity has taken over,” he said.

The mixing of the smoke and the marine layer caused the overcast blanketing the region to become so thick that at 11 a.m., the weather service reported the visibility to be anywhere from three miles to only three-quarters of a mile throughout the region.

Peterson also said the weather service received reports from observers at the Farallon Islands off the coast of San Francisco that visibility Friday morning was down to 1/16th of a mile.

“Now that the smoke has filtered into the marine layer, it’s further deteriorating the air quality and visibility,” he said.

Neither figures to improve until Sunday, according to Peterson. Forecasters are tracking what Peterson called a “vigorous” low-pressure system that may act as a cleanser.