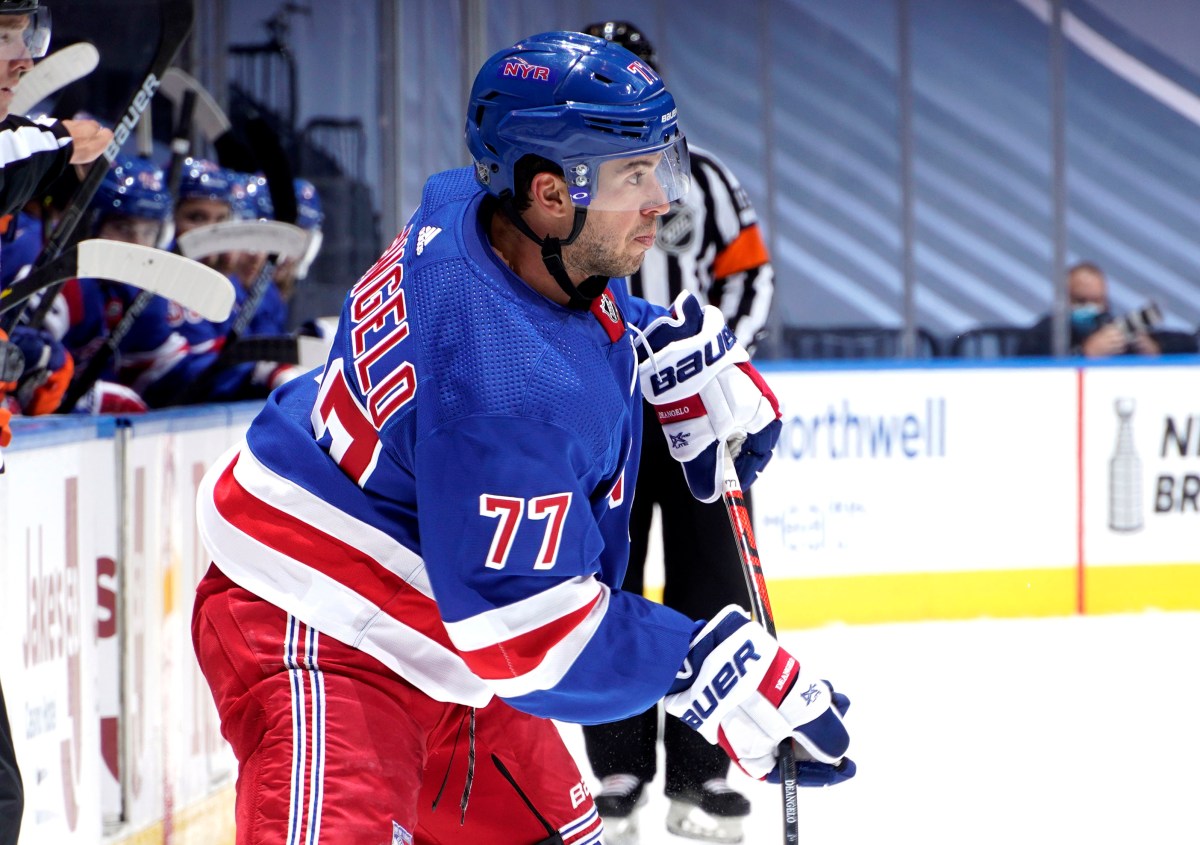 Rangers defenseman Tony DeAngelo did not practice with the team Friday and is expected to be a game-time decision going into Game 1 of the qualifying round against the Carolina Hurricanes on Saturday.

Asked if he would be more inclined to slot in a right-handed defenseman to replace DeAngelo, who is also a righty, coach David Quinn said his decision wouldn’t be based on the shot. It’s likely that defenseman Libor Hajek will step in should DeAngelo be unavailable Saturday.

Darren Radysh, who is coming off his first season with the team’s AHL affiliate, is the right-handed option. He is yet to make his NHL debut.

The 22-year-old Hajek, who has just 33 NHL games under his belt, was an addition to the Rangers expanded playoff roster during training camp. Hajek made the Rangers’ roster out of training camp in October but a knee injury kept him out of the lineup for over a month. He was sent down to AHL Hartford in mid-January and wasn’t called back up for the rest of the regular season.

Additionally, Staal — who left Wednesday exhibition game with the Islanders for an undisclosed reason — is expected to play Saturday. Quinn had said that keeping Staal out in the third period Wednesday was “cautionary.”

Hajek recorded five assists in 28 games with the Rangers this season.

The Rangers announced that they agreed to terms on an entry-level contract with Morgan Barron Friday.

Barron, 21, spent the last three seasons playing for Cornell in the NCAA. He was appointed captain before the 2019-20 season before going on to tally 14 goals and 18 assists in 29 games, bringing his career total to 84 points in three years with the Big Red.

“I’m very happy to be joining the Rangers organization at such a exciting time,” Barron said in a statement to The Post. “It was definitely a difficult decision because of how much I enjoyed my time at Cornell, but at the end of the day, I felt like it was time to take the next step. I’m really looking forward to getting to training camp, whenever that may be.”

Barron was also a top 10 finalist for the Hobey Baker Memorial Award, given to the top player in college hockey, and was named EAC Hockey Player of the Year following the 2019-20 season.

The coronavirus pandemic suspended the final stretch of Barron’s junior season at Cornell, making his decision on whether to stay or go pro that much more difficult. But it appears Barron will be foregoing his senior year to sign with the Rangers.

The Rangers will take the ice for Game 1 without forward Brendan Lemieux as he serves a two-game suspension for a hit on Avalanche forward Joonas Donskoi in March.

Rangers forward Ryan Strome said Lemieux’s presence to be missed, but is anticipating a significant boost once he returns to the lineup for Game 3.

“That’s ultimately something we can’t control, I think the first two games are important to feel out the series and then I’m sure if he gets back in the lineup he’ll definitely provide that spark or uptick,” Strome said. “Just his personality, you can always hear him, runs around not afraid of anybody, a playoff-hockey-type player.”

Both Strome and Staal said they were pleasantly surprised with the ice conditions during Wednesday’s exhibition game.

“I thought it was going to be horrible and it wasn’t too bad,” Staal said. “First 10 minutes were actually pretty clean and the last 10 it gets a bit choppy. I thought they did a pretty good job.”

Quinn said he wouldn’t make the starting goaltender announcement until before Game 1 Saturday.