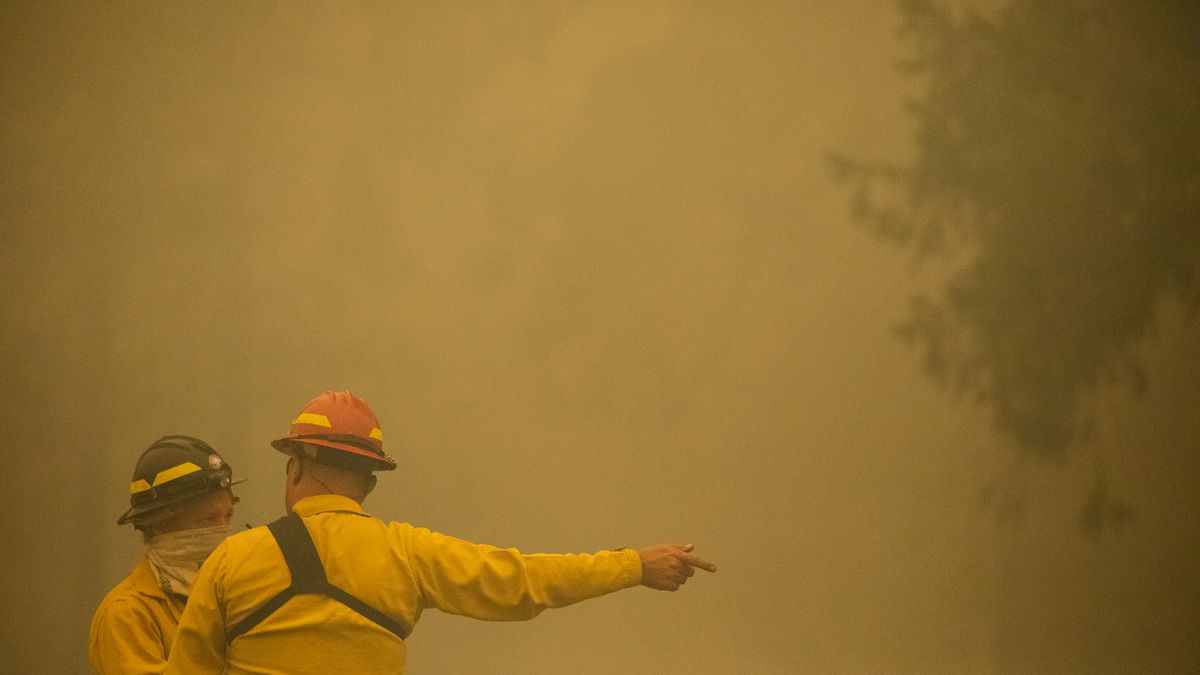 One small town that appeared to be directly in the path of the destructive Santiam Fire has survived largely intact.

It’s a rare bit of hopeful news during a week of devastation across large parts of Oregon and the West.

Mill City Mayor Tim Kirsch evacuated his town in the middle of the night Monday, fleeing as the fire burned on both sides of Highway 22 and embers tossed by violent winds sparked fires in the fields surrounding town.

He was back Tuesday, working with the city’s public works director to keep water in the town’s reservoirs available for the tanker trucks that continue to fight the Santiam Fire.

He found a surreal scene. The sky was black, like midnight on a moonless night, with dense smoke and ash in the air. But much of the town remained.

“Our volunteer fire department has done a tremendous job,” he said.

Kirsch estimates about 90% of the homes in Mill City have survived. And while parts of the town still smolder, the fire is no longer actively burning there.

“There is a small section of town that has been pretty heavily damaged, but it is a small section. I want to say, a dozen to 20 structures, businesses and homes,” he said. “The majority of the city can take a big sigh of relief.”

Among the buildings that survived is the new Santiam Jr./Sr. High School, which was just built with money from a community bond measure.

“It was completely untouched,” Kirsch said.

The Santiam Canyon school district is based in Mill City and serves a number of the communities that have been hit hard in the fire, including Gates and Detroit.

Kirsch says some people in his community are facing painful losses of homes and businesses, including the total loss of Kelly Lumber, a lumber and hardware store that’s been in the community since 1949. Kirsch says he does not believe there was any loss of life in the city itself. Marion County has confirmed the deaths of two people in the Santiam Fire.

Kirsch says he has been inundated with calls and emails from local residents desperate to return home to assess the situation for themselves. But he is begging people to stay away for a few more days to aid firefighters and first responders.

“Quite honestly, they don’t need people getting in the way,” he said.

The situation remains highly dangerous, he said, with fire burning actively in many nearby areas. The town lacks the resources — in particular, water — to support people returning.

Just a quarter of the water in the town’s main reservoir remains, and while the city is pumping 500 gallons a minute into the reservoir, the water is being drained faster than it can be replaced.

The neighboring town of Gates, a few miles to the east, no longer has working fire hydrants, and firefighters battling active fires there have been filling up their trucks in Mill City.

Kirsch’s team has been shutting off sprinklers and leaking water meters and to conserve as much water as possible for the firefighting effort.

He said has fared worse than Mill City, and suffered a devastating loss of homes.

“They are more than welcome to all the water they need, down to the last drop,” he said.