Rishi Sunak has been urged to extend the furlough scheme for certain sectors to avoid a cliff-edge when it ends next month.

The Treasury select committee said the Chancellor risked mass long-term unemployment and putting viable firms out of business without a targeted extension.

The committee of MPs also recommended further action to boost consumer spending after last month’s Eat Out to Help Out scheme.

The furlough scheme is due to come to an end on October 31, meaning many firms may make employees redundant. 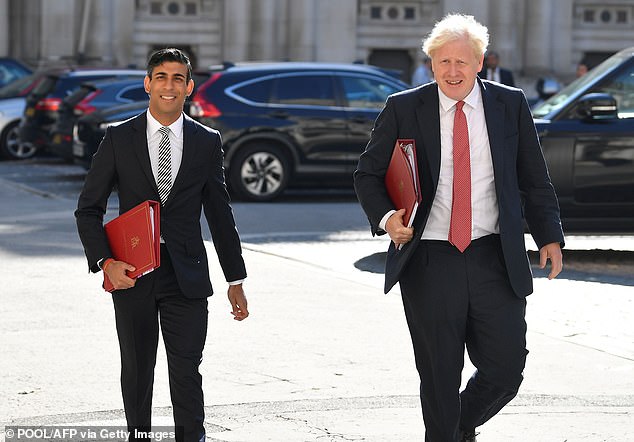 Chancellor of the Exchequer Rishi Sunak (left) has been urged to extend the furlough scheme for certain sectors when it ends on October 31, however Prime Minister Boris Johnson has ruled out this possibility

Opposition MPs and industry have called on the Government to extend the scheme, but the Prime Minister has ruled this out.

Treasury committee chairman Mel Stride said: ‘The key will be assisting those businesses who, with additional support, can come through the crisis as sustainable enterprises, rather than focusing on those that will unfortunately not be viable.’

Last week it was revealed that up to £3.5billion of furlough cash may have been paid out in wrong or fraudulent claims.

Around 9.6 million jobs have been supported by the furlough scheme since it was set up to protect workers during the Covid-19 lockdown.

But Mr Sunak has previously insisted the scheme will not be extended, instead putting faith in his job retention bonus offering firms £1,000 per furloughed worker brought back.

But the Treasury committee condemned the job retention bonus, saying it is unclear if it is ‘good value for money as it’s not effectively targeted’.

It claimed the support will be used for a significant number of employees who would have been kept on anyway.

The committee also pressed for another move to help encourage consumer spending, cautioning the VAT cut on hospitality and leisure ‘may not be enough’.

In the report entitled The Challenges of Recovery, it warned: ‘Continued consumer caution around re-engaging with the economy, the prospect of more localised outbreaks and a second wave are dampening a full recovery to pre-pandemic levels of consumer spending, with some level of economic scarring almost certain.’ 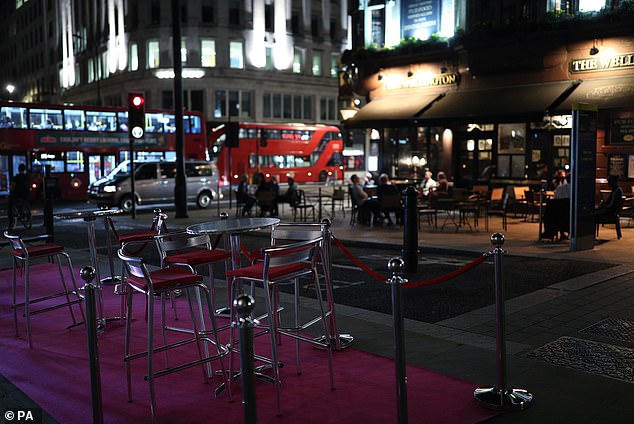 The committee of MPs also recommended further action to boost consumer spending after last month’s Eat Out to Help Out scheme. Empty tables placed on the pavement outside a bar during a quiet night in Covent Garden, central London, this week

The Treasury insisted it would ‘continue to innovate in supporting incomes and employment through our Plan for Jobs’, but stopped short of commenting on the report’s recommendations.

Other recommendations in the report include measures to help small firms pay back loans taken out during the crisis, such as a possible student loans-style repayment system, as well as an extension to changes made to Universal Credit.

But the committee added the support measures would take a substantial toll on public borrowing and said Mr Sunak should set out an ‘initial roadmap’ of plans to tackle ballooning Government debt.

He said: ‘The Chancellor will need to reconsider his plans to swiftly phase out support given the painful reality that the economic crisis is here to stay.’