She recently revealed she was in ‘agony’ after undergoing a tonsillectomy.

And Rita Ora put on a brave face as she stepped out in a revealing ensemble for an evening of shopping in West Hollywood on Friday.

The Hot Right Now songstress, 29, flashed her black bra and ample cleavage in a semi-sheer black lace top which she wore with a sleek tailored blazer. 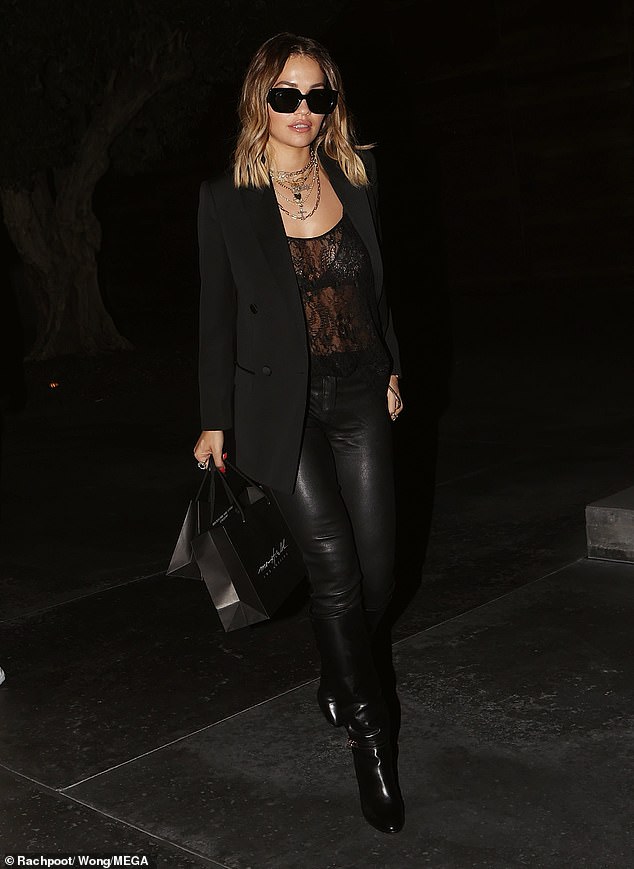 Wow: Rita Ora put on a brave face as she stepped out in a revealing ensemble for an evening of shopping in West Hollywood on Friday

The racy top also revealed her honed abs, while the songstress drew the eye to her lithe legs in leather leggings.

Rita boosted her height with patent leather boots and accessorised with a selection of gold chains and edgy shades.

The star wore her blonde tresses in soft waves while her pretty features were enhanced with a radiant palette of make-up.

The outing comes after the beauty  took to Instagram to post a couple of pictures of herself hand-painting Valentine’s Day cards, alongside a lengthy caption.

She penned: ‘So these past 2 weeks I under went a Tonsillectomy and let me tell you, it’s no joke.

Racy: The Hot Right Now songstress, 29, flashed her black bra and ample cleavage in a semi-sheer black lace top which she wore with a sleek tailored blazer 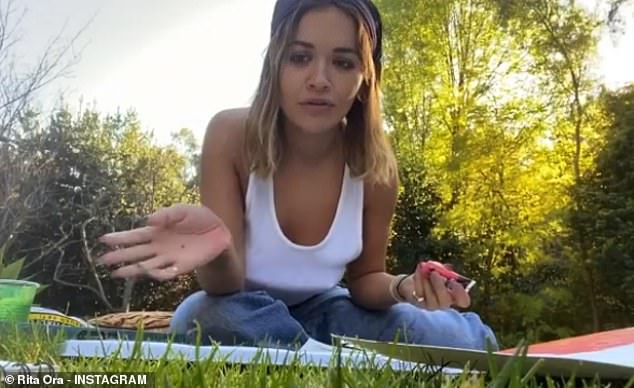 ‘It’s SO painful’: Rita took to Instagram on Friday to reveal she is in agony after having a tonsillectomy and admits it’s given her time to ‘relax and heal’ 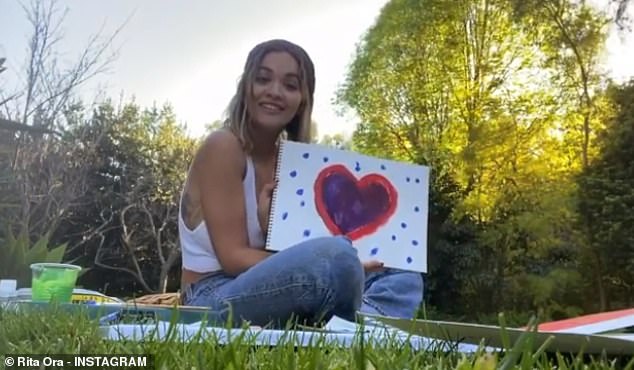 Therapeutic: She revealed she had been spending the day painting handmade Valentine’s Day cards for her loves

‘It’s SO painful, but on the plus side it’s given me time to reflect relax and heal. It’s a blessing to be able to heal in peace and put everything into perspective and visualise the rest of your year and what’s coming or what you want to achieve.

‘I am such a believer in setting intentions into the universe as it DOES listen. Also learning new things has always been a obsession of mine.’

She continued: ‘I’m not Monet by any means but I damn sure like some colour. So I made some affordable quick vday cards for the ones I love. ❤️ happy Valentine’s Day lovers.’ 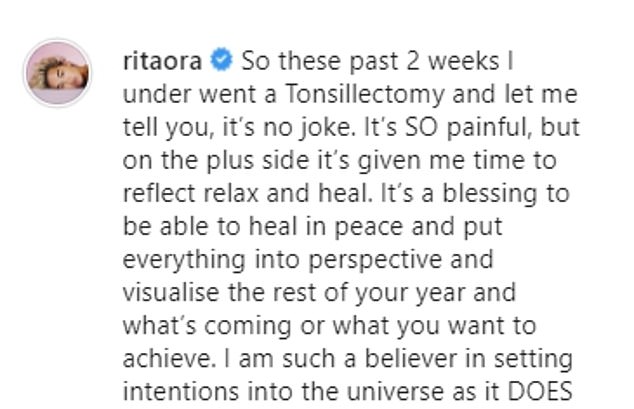 Sharing with her fans: Rita shared this lengthy post about how she was feeling on social media

Sofia Richie wrote: ‘I love you,’ alongside some heart emojis.

And her mother, Vera Ora, wrote: ‘Be my Valentine zog.’

Rita recently had the word ‘zog’ tattooed underneath her ear to pay tribute to Vera, who used the nickname while Rita was growing up. 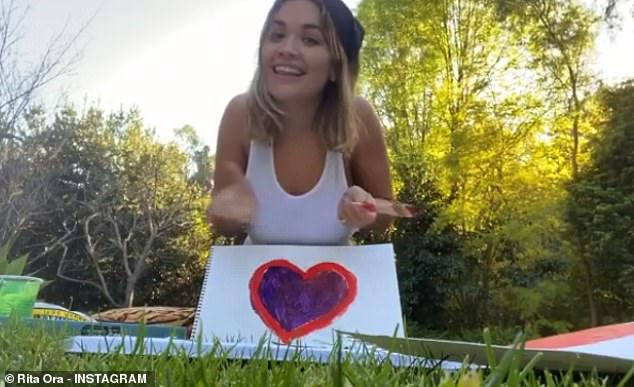 Not just a pretty face: Rita seemed pretty pleased with her artistic creations 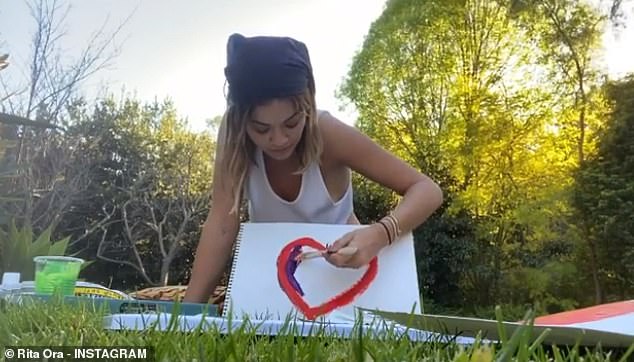 Artistic licence: She was painting up a storm in her garden as she took some time out to heal

Gushing about the tribute, she wrote: ‘When I was younger my mum @veraor would call me her zog ‘Zogi mamit’ she would say, which means her little baby bird in Albanian.

‘So thank you @_dr_woo_ for making this memory with me I love it so much. And for my extra finger jewels too love love.’ 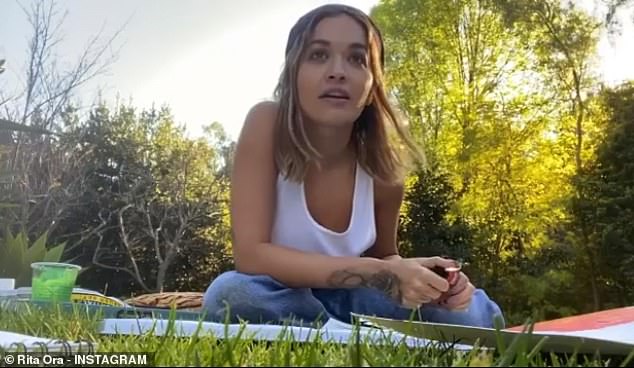 Casual: She was dressed in a low key fashion wearing a simple white vest top and baggy jeans

Rita’s post comes after she admitted that fans only see the ‘workaholic and thick-skinned’ side of her as she stuns for a new photoshoot for LOVE Magazine.

She candidly revealed that while fans seem to have a hard-working preconception of her, in reality she’s ‘vulnerable, sensitive and pretty emotional.’

The Anywhere hitmaker said: ‘I’ve done so much partying, and I just felt the time was right to do something different for my birthday. So I thought, let’s go into the desert, let’s go for a hike, let’s breathe in some fresh air for a change.

‘People see the workaholic, headstrong, thick-skinned twentysomething, but there’s another side to me, one that is vulnerable, sensitive and pretty emotional.’ 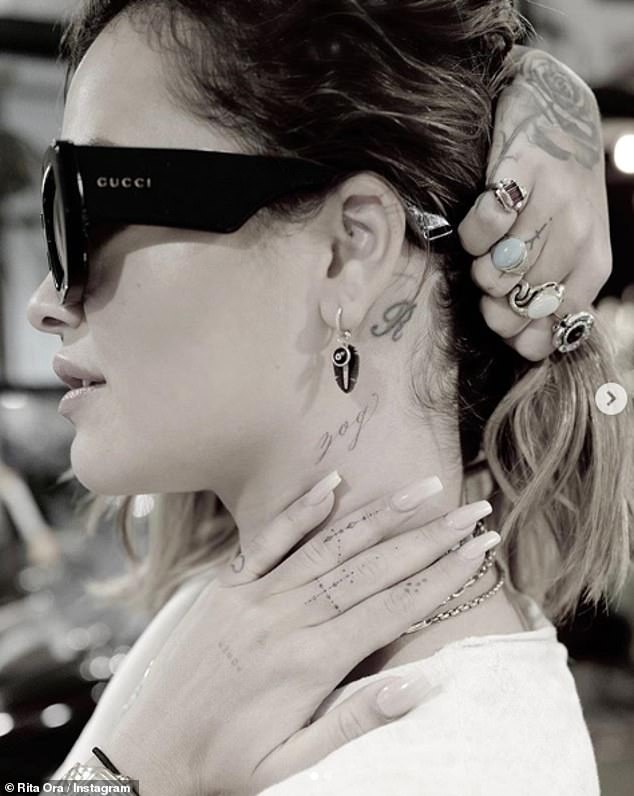 Tribute: Earlier this month, the singer showed off a tattoo which she got in honour of her mother Vera, who calls her Zog