Rumer Willis appeared to be in great spirits this weekend as she spent time by a swimming pool in swimwear.

The daughter of Demi Moore and Bruce Willis had on a yellow bikini as she floated on a raft and then posed in a black one piece suit.

This comes after the Dancing With The Stars veteran was spotted with her arm around newly single On The Basis Of Sex actor Armie Hammer. 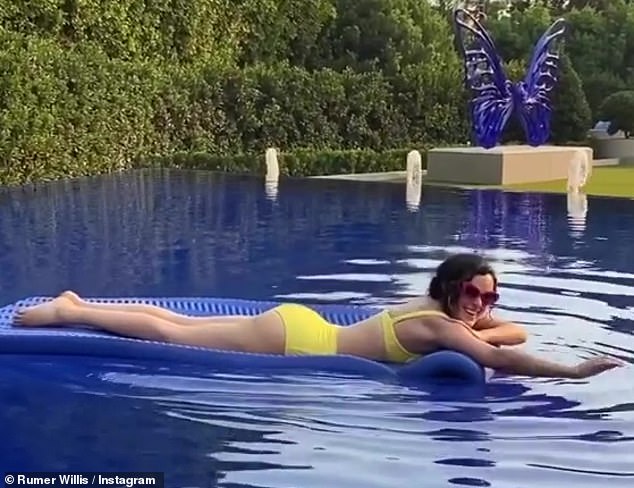 Having a blast: Rumer Willis appeared to be in great spirits this weekend as she spent time by a swimming pool in swimwear 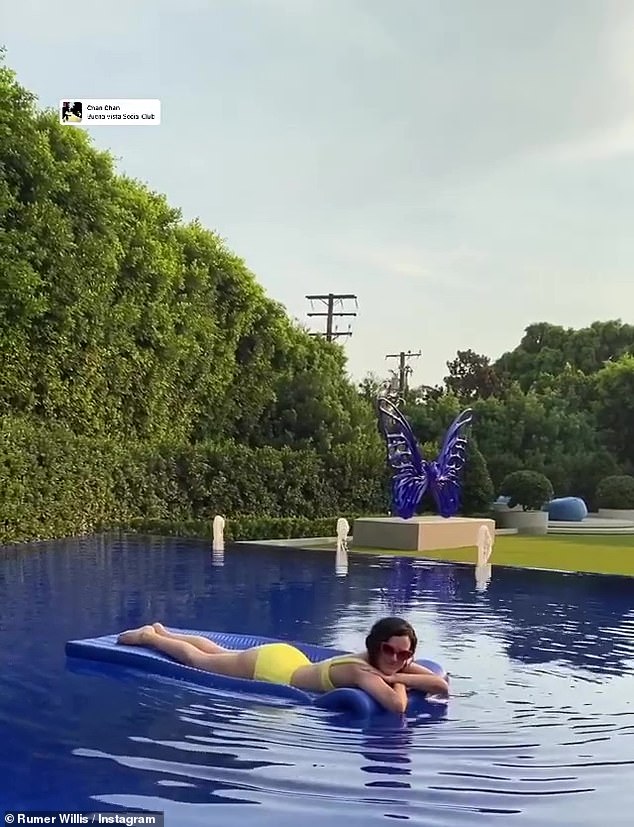 Fun in the sun: The daughter of Demi Moore and Bruce Willis had on a yellow bikini as she floated on a raft and then posed in a black one piece suit

He split from his wife of 10 years, Elizabeth Chambers, earlier this year. They have two children, Harper and Ford.

The duo walked in step as they both had on comfortable clothing. They were seen arm-in-arm as if they were an item, he with his arm under her arm and she with her arm around his waist.

The two did not seen shy with their public display of affection as they left a cafe in Los Angeles.  Lounge singer Rumer looked nicely put together in a light grey and white sweater that exposed her white bra. There were rips in it here and there. 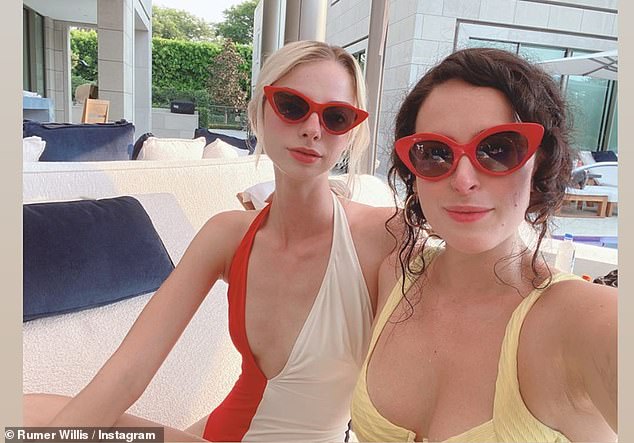 With a blonde pal: The Striptease actress posed in red sunglasses with a friend 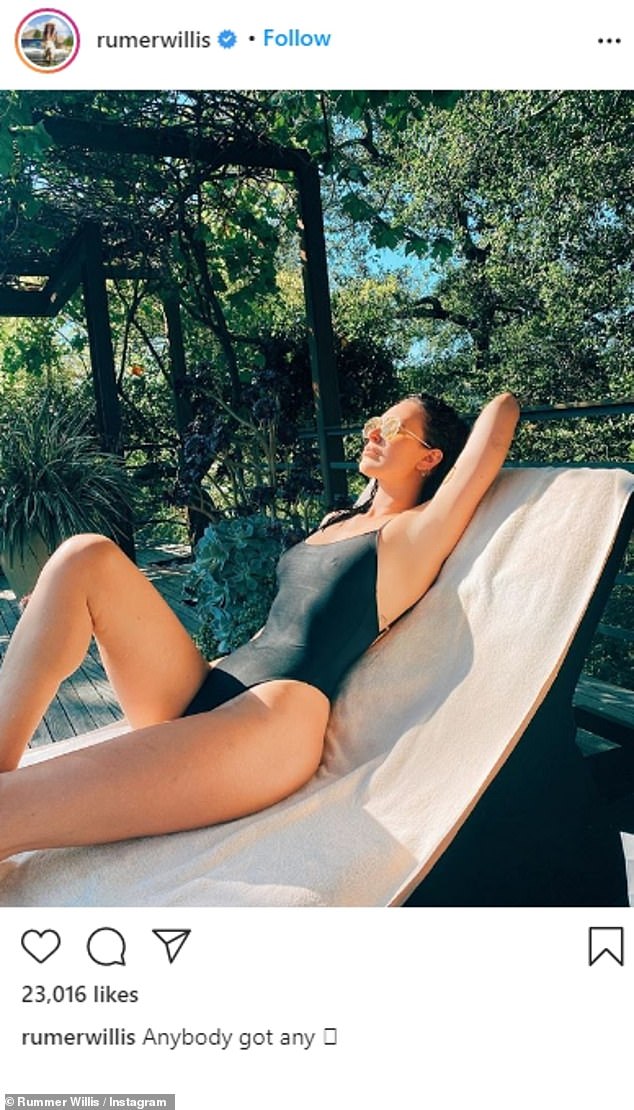 Just taking in the heatwave: The beauty also had on a black swimsuit as she said it was 107F

Armie had a Sixties hippie feel to his outfit with a drawstring top with a V-neck line in a speckled grey and white fabric. The Man From UNCLE star added chocolate brown slacks and white lace-up sneakers.

Not only are the pair hitting it off in real life, but online they are showing each other some love as well.

The duo follow each other on Instagram, and last week Rumer commented on a video Armie posted of himself ‘flying into the next year’.

Rumer commented on the video of Armie dashing down a tarmac with a praise hands emoji. 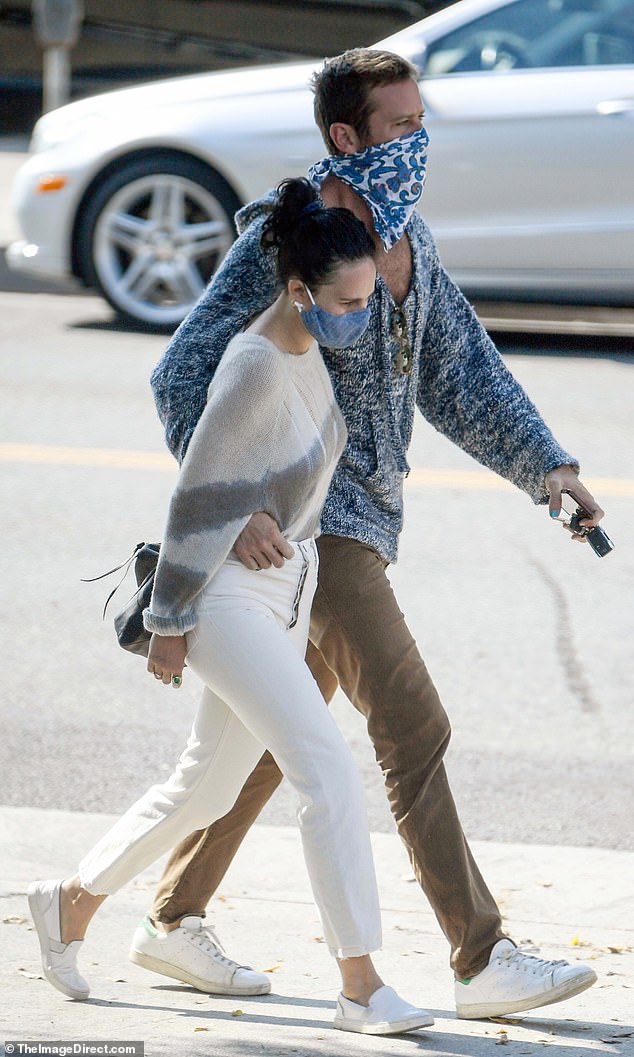 In step: This comes after the Dancing With The Stars veteran was spotted with her arm around newly single On The Basis Of Sex actor Armie Hammer in LA

Representatives for Hammer and Willis did not immediately calls for comment.

The outing comes just weeks after Armie and his ex Elizabeth announced they were going their separate ways following 10 years of marriage and two children together.

Armie posted a photo of him and Elizabeth in happier times, and wrote: ‘Thirteen years as best friends, soulmates, partners and then parents. It has been an incredible journey, but together, we’ve decided to turn the page and move on from our marriage.

‘As we enter into this next chapter, our children and relationship as co-parents and dear friends will remain our priority.

‘We understand this news lends itself to public dialogue, but in the interest of our children and our family, we’re asking for privacy, compassion and love during this time.’ 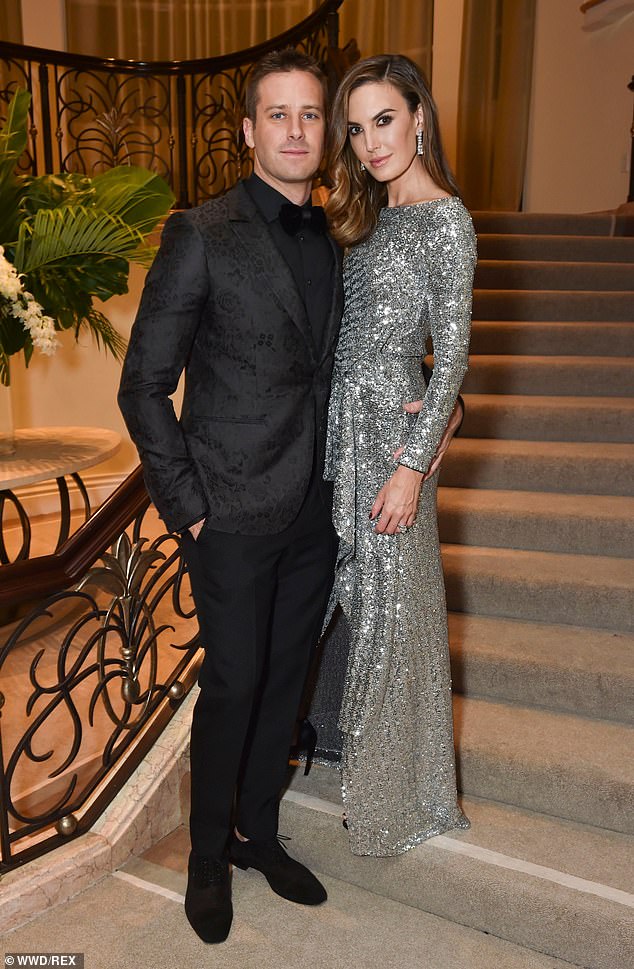 Done: The 34-year-old split from his wife of 10 years, Elizabeth Chambers, with whom he has two children, Harper and Ford; seen in 2019

They even went on to found the Texas bakery, Bird Bakery, together.

Elizabeth filed for divorce prior to their social media announcement, where she cited ‘irreconcilable differences’ as the reason for their separation.

A source claimed to UsWeekly that the marriage breakup had been a long time coming.

‘They have been having trouble in their marriage for quite a while and each doing their own thing,’ the outlet’s source shared. 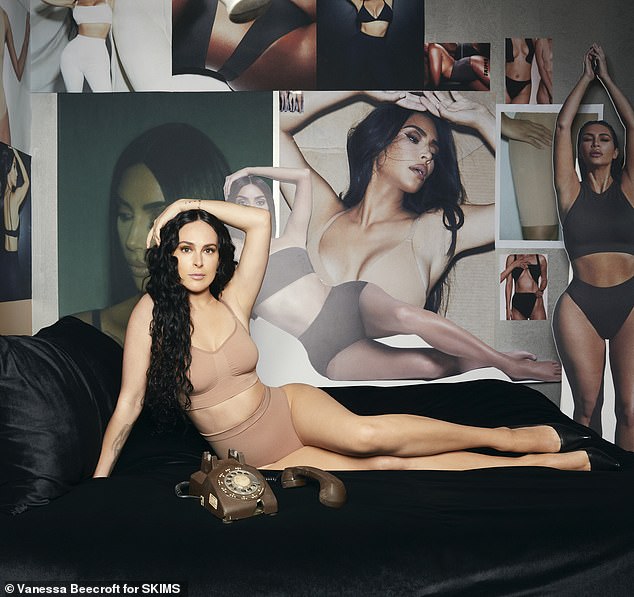 Another insider shared: ‘Right now, their biggest concern is their children and how this change will impact them. Their children are their top priority and always will be.’

‘The split is amicable and they will work through this difficult time with love and respect,’ the insider added.

The couple’s children have now started school in the Cayman Islands, where they are staying with their mother. 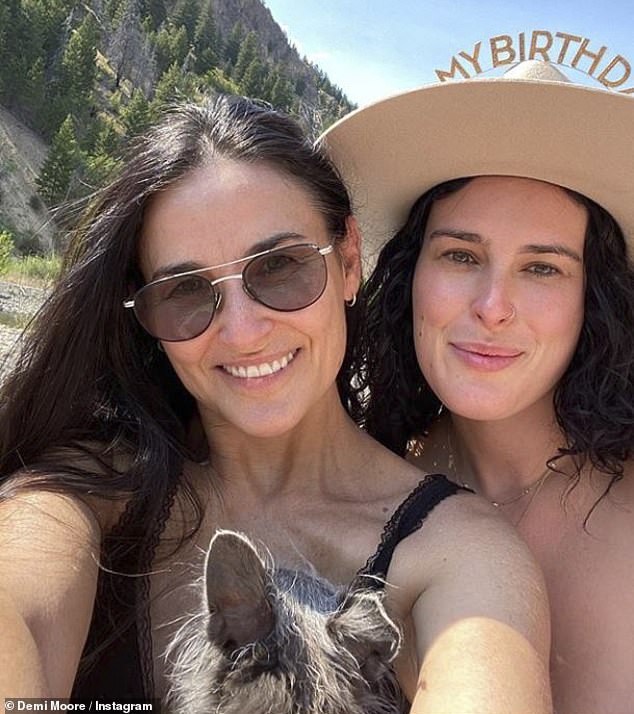 Famous family: Willis is the daughter of Demi Moore and Bruce Willis; seen with mom in Idaho

‘Monday marked their second week of kindergarten and pre-k IRL in GC and the first day of Zoom Kindergarten for Hops at her school in LA,’ Elizabeth revealed on Instagram.

Rumer, meanwhile, was previously linked to actor Ricky Whittle in 2014. She was also reportedly ‘infatuated’ with her 2015 Dancing With The Stars partner Val Chmerkovskiy, even allegedly getting a tattoo commemorating their partnership.

But the tattoo was reportedly removed after Val began dating DWTS star Jenna Johnson, whom he ultimately married.