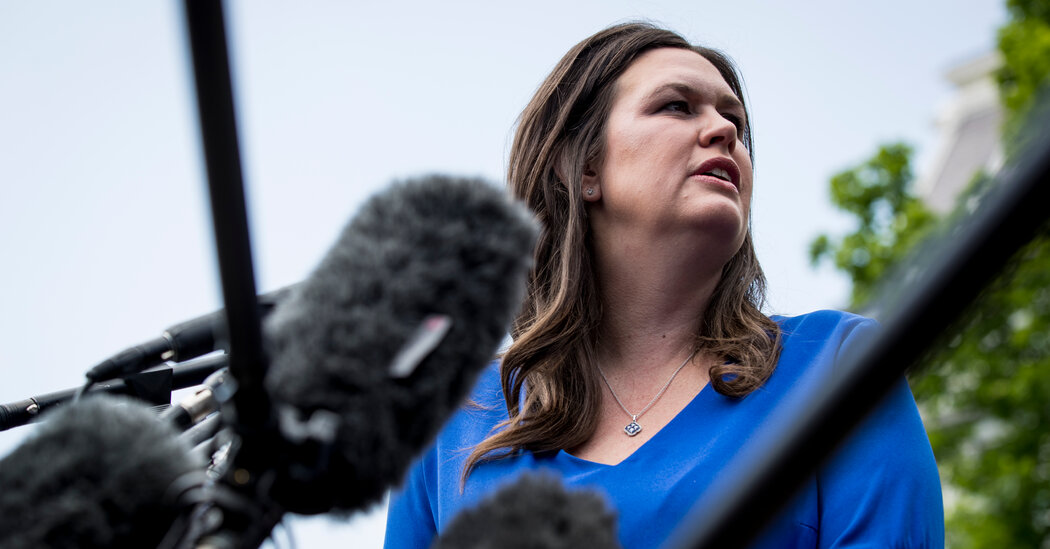 President Trump joked to the former White House press secretary Sarah Huckabee Sanders about her “taking one for the team” after North Korea’s leader, Kim Jong-un, winked at her during a summit in 2018.

Ms. Sanders writes about the episode in her book, “Speaking for Myself,” in which she discusses her time working for Mr. Trump, as well as how she may run for governor of her home state, Arkansas, and her early days caring for young children.

Throughout, Ms. Sanders writes glowingly about her former boss. Excerpts from the book, which goes on sale on Tuesday, were provided to The New York Times.

Ms. Sanders describes the meeting in Singapore between Mr. Trump and Mr. Kim in detail, including a moment where she and the North Korean leader “made direct eye contact and Kim nodded and appeared to wink at me.” She described herself as stunned.

“I quickly looked down and continued taking notes and for the rest of the meeting only looked up from my notes in the direction of the U.S. delegation,” she writes.

On the trip back to Air Force One, Ms. Sanders relayed the encounter with Mr. Kim to Mr. Trump and the White House chief of staff at the time, John F. Kelly. The two men burst out laughing, Ms. Sanders writes.

Ms. Sanders made clear she did not mean that, but Mr. Trump and Mr. Kelly continued to joke about Mr. Kim’s intentions.

“Well, Sarah, that settles it,” Ms. Sanders recalls the president joking. “You’re going to North Korea and taking one for the team! Your husband and kids will miss you, but you’ll be a hero to your country!”

At another point during the meeting, Ms. Sanders writes, Mr. Trump unnerved Mr. Kim when he offered him a Tic Tac breath mint.

“Kim, confused, and probably concerned it was an attempt to poison him, wasn’t sure how to respond,” Ms. Sanders wrote. “The president dramatically blew into the air to reassure Kim it was just a breath mint and took a few from the box and popped them into his mouth. Kim reluctantly accepted the Tic Tac from President Trump and ate it.”

In the book, she is said to address criticism of her and Mr. Trump. Ms. Sanders was heavily criticized for her spin on behalf of her boss from the White House podium, often accused of relaying exaggerations or outright falsehoods.

But her boss saw her as a devoted supporter and liked the way she defended him. When she held the job of press secretary, Ms. Sanders often attended high-level meetings with Mr. Trump, and she had the respect of most of her colleagues because she was able to speak with a degree of authority about events that had taken place.

Mr. Trump has often spoken of the meeting with Mr. Kim as a key moment of diplomacy in his administration. While the engagement between the two men — something Mr. Trump’s predecessor declined to pursue — halted escalating rhetoric between the two countries, North Korea announced this year that it was pulling back from its relationship with the United States, dismissing promises made by the Trump administration as empty.

In her descriptions of the events around the summit with Mr. Kim, Ms. Sanders describes a president who was attuned to the news coverage the event was drawing and who wanted to boast to friends about what was happening.

When he learned he had missed a call from the golf player Jack Nicklaus, Mr. Trump wanted to get him on the phone.

“I suspect the president was looking for someone to talk to about something lighter than North Korea and nuclear armageddon so he asked for the phone and called Jack,” Ms. Sanders writes. “They spoke and laughed for a few minutes like old friends do. We motioned to the president it was time. He told Jack he had to go, and said, ‘I’m about to do something big. Turn on your TV. You won’t believe it, and you don’t want to miss it.’”

At another point, she writes about Mr. Trump asking about news coverage of the summit, as a television was on in the background. Dennis Rodman, the former N.B.A. player who has spent time with Mr. Kim and with Mr. Trump separately, was onscreen talking.

“We stopped to watch,” she writes. “Rodman was complimentary of both the president and Kim and said that if anyone could make a deal, it was Donald Trump. It was bizarre to watch Rodman offer insights on such a serious topic, but he was one of the few people in the world who had a relationship with both Kim and President Trump. The president turned to me and said, ‘Call Rodman and thank him.’”