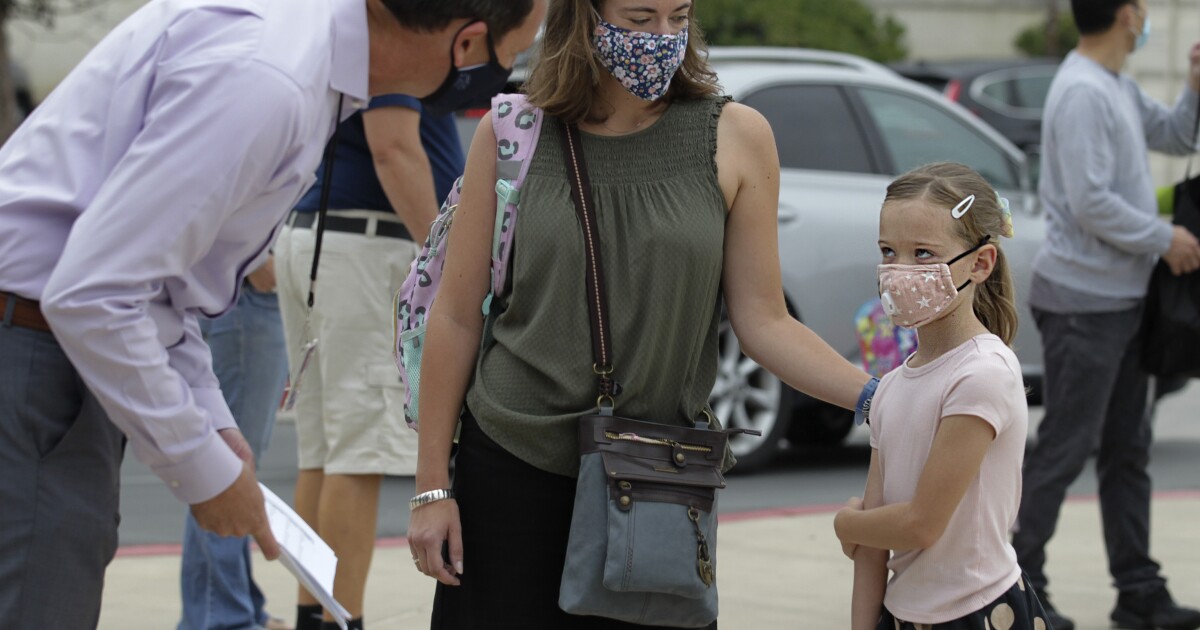 The Capistrano Unified School District is ready to go, preparing to start welcoming students back to class on Sept. 28, soon after Orange County is expected to meet the state’s COVID-19 requirements for reopening schools.

But 25 miles northwest, Santa Ana Unified School District officials have laid out a more sobering timetable. Elementary schoolchildren probably won’t be back to class until at least November. High school students? Possibly not until early 2021.

“We have some of the highest COVID rates in all of Orange County,” said Santa Ana district spokesman Fermin Leal. “We’re not going to reopen just because the state tells us it’s OK, or the county gives us the go-ahead.”

The recent decline of new coronavirus cases in California has freed 25 counties to reopen schools in the weeks ahead. On Sept. 1, San Diego County — home to the second-largest school district in the state — got the go-ahead. Orange County is on track to reopen schools on Sept. 22. San Francisco, Santa Clara and Santa Cruz are also cleared to soon open.

But state and county clearance are only the first steps. In sprawling and diverse Orange and San Diego counties — and in the future Los Angeles County — school district leaders face disparate situations and complicated decisions that must take into account neighborhood COVID-19 rates, the size of the district, parent opinions and negotiations with employee unions.

Across the nation, many school districts switched from campus-based classes to online-only just before the start of school in response to outbreaks, staffing issues and lack of preparedness. Some schools that did open had to quickly shut down amid outbreaks.

In Los Angeles County, where COVID-19 remains widespread, such decisions are months away as Public Health Director Barbara Ferrer said last week that no schools will be allowed to open to all students until at least November.

Districts such as Santa Ana and San Diego County’s National Elementary — and others serving low-income majority-Latino neighborhoods hard hit by the coronavirus — say it’s still unsafe to reopen, adding yet another blow to the disproportionate hardship of the COVID-19 pandemic on communities of color.

Children in many of these communities were more likely to have slower access to computers and high-speed internet at the onset of school closures. As school started this fall online, their families were often unable to afford private tutors — and their parents are more likely to hold jobs as essential workers, making it difficult to offer support at home. Now many of these students won’t have the option to return to campus as early as their peers in more affluent communities with lower infection rates.

“The same children whose educations were most disrupted and learning interrupted from March to June are now least likely to have the face-to-face interactions and personalized supports they need to regain lost ground,” said economist Emma García, who co-authored a report released last week on COVID-19 related inequities for the Economic Policy Institute, based in Washington, D.C.

In districts serving more affluent households, such as Capistrano Unified, COVID rates are lower and school leaders feel their hard-tooled planning will allow for safe reopening. Tustin and Cypress in Orange County are among the districts readying classrooms for their students. Del Mar Union Elementary in San Diego County opened on Sept. 8.

Small districts, meanwhile, may have more agility to pivot quickly from distance learning to in-person education. Big districts, including San Diego Unified, must factor in myriad circumstances given the expanse and diversity of the communities they serve.

In the National Elementary School District, just south of San Diego, cumulative infection rates for the community are among the highest in the county: 2,593 people per 100,000 residents. The district is 84% Latino and 8% Filipino, and nearly four in five students live in poverty.

Supt. Leighangela Brady announced in mid-August that the district hoped to reopen its 11 schools by Oct. 19, but that the date might have to be pushed back given that coronavirus case rates in the community remained high.

Christina Benson, a union leader and fifth-grader teacher at Central Elementary in the National district, said the virus has taken a tragic toll on some of her 28 students — five have had a family member die of COVID-19.

And she worries about whether schools are ready to protect against the virus. Her school is large and her classroom windows face a busy street near a fire station and naval base, making it challenging to keep them open for proper ventilation because of noise.

“To me, it doesn’t seem like we could open,” she said, “our infections rates are too high.”

Del Mar’s eight schools operate in two ZIP Codes that have had among the lowest county rates of coronavirus infection over the course of the pandemic, according to San Diego County health data. About 8% of its students qualify for a free or reduced-price lunch, putting it among the most affluent school communities in the county.

“The variation in school openings is not surprising,” said Isidro D. Ortiz, professor of Chicana and Chicano studies at San Diego State University. It reflects “historical disparities in resources and educational opportunity” for Latinos, who comprise the largest ethnic group in the county.

“The crisis calls for stakeholders to rise to the occasion across all districts,” Ortiz said. “But will they? Will we see an exacerbation of the disparities?”

In Orange County’s Anaheim Elementary School District, where about 85% of students are Latino and 84% qualify for free or reduced-price lunch, officials say local transmission rates make it impossible to reopen soon.

In a letter to families in late August, district officials noted that the schools’ surrounding neighborhoods “continue to have approximately twice the COVID-19 positivity rates in comparison to all of Orange County.”

Just eight miles away, however, Cypress School District officials have announced that students will be allowed to return starting Sept. 23, as long as county case rates continue to decline. About 34% of students qualify for a free or reduced-price lunch. The total case rate in the city of Cypress is 1,027 per 100,000, according to county data.

“We have had weekly meetings with our 27 districts and the O.C. Department of Education about their reopening plans,” Chau said. “This is a work in progress that necessitates ongoing updates, review and dialogue.”

The largest school districts, meanwhile, must consider the wide diversity of the communities they serve.

In June, San Diego Unified’s Board of Education voted to open for five-days-a-week, on-campus instruction as soon as possible. But though it has the county’s OK to open, it still hasn’t set a date.

“The county’s decision to allow schools to reopen does not mean it is safe for every school to do so,” said district spokeswoman Maureen Magee. Many of the district’s 123,000 students travel from one neighborhood to another for school, as do district employees, increasing the danger of spreading the virus.

“These are precisely the kinds of local factors that districts are required to examine,” Magee said.

With a quick reopening unlikely, the San Diego school board approved a plan to offer appointment-based, in-person services to help younger students most at risk of learning loss. In-person “learning-loss sessions” for an estimated 12,000 students will be conducted one-on-one or in small groups only in spaces “with adequate air exchange, including MERV-13 air filters and/or portable ventilation units,” according to the district.

Parents, too, are weighing the possibility of returning to campus on a smaller level — based on unique family circumstances:

Is a family member at high risk of developing serious complications from the virus? How have their children taken to online learning? Do both parents work from home? State rules require schools that do reopen to continue offering a distance-learning option. And some districts are allowing parents to choose between attending school 100% in person, 100% online or a hybrid.

“For high school and middle school, everything is about your friends,” she said. But she feels most comfortable with a “one foot in the door, one foot out” option, she said.

Home distractions, arguments and a need for structure have convinced Fullerton mother Juana Serrato on a return to the classroom as soon as possible.

Her three boys — Edgar, 11, César, 10, and Alan, 8 — attend Pacific Drive Elementary’s virtual classes from their bedrooms and the living room, while Serrato and 4-year-old Ariel do preschool activities in the kitchen.

“They’re learning and they’re working their hardest to do their homework, but … it’s hard to ask them to stare at a screen for hours,” she said. “When one gets bored, he distracts another. And when I go see what’s going on, sometimes two are fighting, and how can they learn like that?”

Serrato said that as long as children take precautions — wearing masks, socially distancing and washing hands frequently — they should be allowed to return to campus.

“You have to live and have faith that things will be fine,” Serrato said.

Trang Lai, Fullerton School District’s director of educational services, says no reopening date has been set, but officials are looking at “anywhere from the third week in September to October,” she said. “It just depends on the number of [COVID-19] cases.”

Alondra Castellanos says online learning has been challenging for son Phoenix, 8, who is on the autistic spectrum and attends Roosevelt-Walker Elementary School in Santa Ana. Castellanos bounces in between Zoom classes with her son while watching her 4-year-old daughter and working from home in telecommunications.

“This all takes a toll,” Castellanos said.

Still, even if an on-campus option were available, Castellanos said she wouldn’t send her son back. Santa Ana has among the highest total case rates in Orange County: 2,848 per 100,000, according to the county health agency.

“It’s safest to continue distance learning until at least after the winter break,” she said. “If the situation improves, then maybe we can think about getting back to class.”