Scientists have taken inspiration from X-Men’s Cyclops and created a contact lens that points a red laser at what the wearer is looking at.

The regular-size contact lens is fitted with a vertical cavity surface emitting laser (VCSEL) which points in the direction the user is looking.

French engineers used off-the-shelf components to create a working prototype which can be used for gaze recognition.

Gaze recognition is a budding field of research and could be the next frontier for computer systems.

Instead of using a touch screen or a mouse to control a device, gaze recognition would allow users to select options on a display just by looking at them. 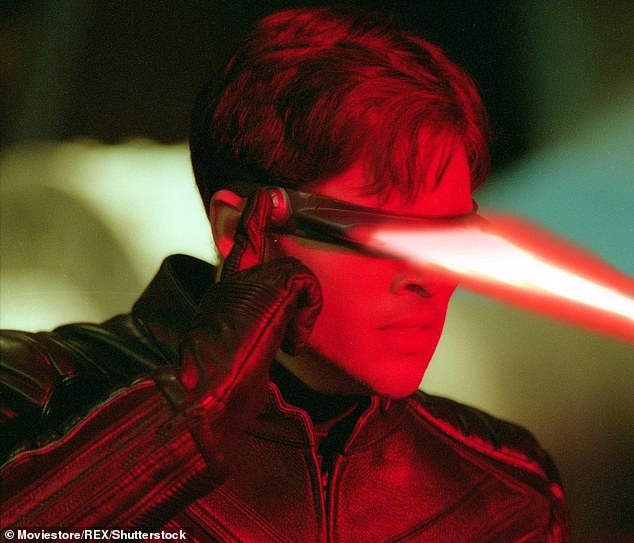 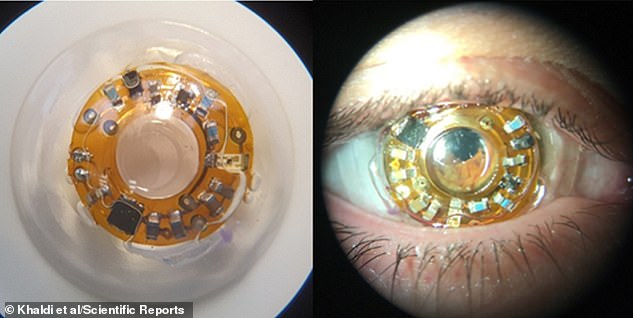 Pictured, the electronics inside the contact lens prototype (left) and as worn on a human eye (right).  The system is described as ‘a new eye tracking system using an infrared (iR) laser pointer embedded into a wireless smart contact lens’

The design relies on a contact lens being worn on each eye and an external camera system, fitted to a spectacle frame, tracks where the person is looking.

In an experiment set up by the experts at IMT Atlantique in Nantes the contact lenses were fitted to an artificial eye which rotates.

A beam splitter was positioned in front of the eye and glasses and this locates the two beams, one from each eye.

‘This beam splitter is coated to reflect the IR beams generated by the two laser spots while being transparent for the eyes and coated to avoid unwanted reflections,’ the researchers write in their study.

An infrared camera then records where the laser has been reflected and software plots where the two beams from both eyes would meet, indicating where the person is looking.

‘In our system, detecting the laser beam direction will directly provide the gaze direction,’ the researchers say.

Video published alongside the study shows the system working in real time.

There are other gaze recognition techniques which are currently being investigated, including systems which rely heavily on cameras and sensors.

At Mobile World Congress in Barcelona last year, BMW unveiled a prototype vehicle that lets drivers control the inside of the car using only their eyes thanks to one of these systems.

A high-definition camera mounted in the dashboard will track a customer’s head and eyes to precisely identify what they are looking at – either inside or outside the car.

BMW claims drivers will be able to look outside the car windscreen at a restaurant they are passing and learn its menu, opening hours and even book a table.

So-called gaze recognition will be available to customers for the first time in the BMW iNEXT as of 2021 alongside improved gesture and voice recognition in a package the German car manufacturer is calling Natural interaction.

In an experiment set up by the experts at IMT Atlantique in Nantes the contact lenses were fitted to an artificial eye which could rotate. A beam splitter was positioned in front of the eye and glasses and this locates the two beams, one from each eye (pictured, a diagram showing how the laser, splitter and camera work together)

This diagram describes the basic layers and components, as well as dimensions, of the `new-era contact lens prototype.  French engineers used off-the-shelf components and say it could be made lighter and more efficient with custom materials

However, the budding field is looking for ways to improve gaze recognition even further and expand its potential uses.

Writing in their study, the researchers say: ‘The main advantage of the cyclops lens is that there are no external parts. All the electronics is embedded within the lens.’

The other components needed can be housed in  the glasses frame, located just centimetres from the lens itself.

For this prototype, the researchers powered the constant laser with a an external generator connected with a thin wire in one corner.

However, if the laser-pointer contact lens was ever to enter into production, the researchers say they would opt for a battery-powered version.

The scientists say their contact lens is not the finished product and it could be dramatically improved with custom-built components.

However, as the first eye tracking system using an infrared laser pointer embedded into a wireless smart contact lens, it shows the principle works and has potential.

One concern the researchers do have is that the laser, which is on constantly, could burn the wearer’s eyelids.

‘If we consider that most people blink around 15 times a minute (150 ms per blink in average), this means that during a 1 h use, the eyelid will be exposed to the VCSEL beam approximately 900 times,’ the researchers calculate.

This, they say, could trigger some photosensitive reaction or burning, depending on power.

However, the academics say the laser is too weak to cause any harm.

The findings are  published in the journal Scientific Reports.