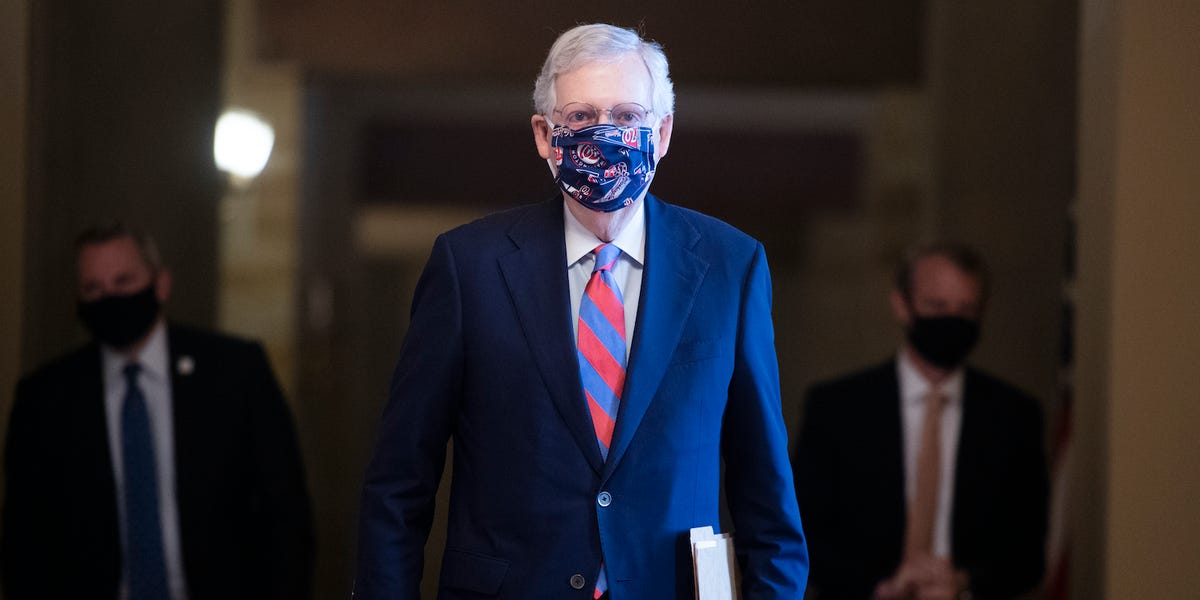 Senate Republicans unveiled a slimmed-down stimulus plan on Tuesday to implement a $300 federal supplement to state unemployment benefits. But it leaves out a second round of $1,200 direct payments, which helped people make ends meet at the height of lockdowns earlier this year.

Democrats are likely to block the bill, which doesn’t include any extra federal aid for states. It also carries a $500 billion price tag. That’s half as much as the initial $1 trillion plan that the GOP rolled out in late July.

Given its slim odds of passage, the legislation largely appears to be messaging intended to convey the GOP’s biggest priorities for the next coronavirus relief package and put Democrats on the defensive after Senate Republicans failed to coalesce around their own spending package.

The bill would put in place a $300 federal unemployment payout through December 27 and enact liability protections for businesses through the Safe to Work Act. That measure raises the bar for hospitals, schools, and small and large businesses to face coronavirus-related lawsuits.

Read more: MORGAN STANLEY: The government’s recession response has the stock market heading for a massive upheaval. Here’s your best strategy to capitalize on the shift.

It didn’t include a second round of direct payments, which had drawn support from some Republicans — including President Donald Trump — and Democrats. Experts say the money shored up the finances of millions of jobless people as the pandemic shut down the US in March.

The plan would also extend the deadline to September 2021 for states to use $150 billion in federal assistance granted in March under the Coronavirus Aid, Relief, and Economic Security Act without increasing flexibility or attaching new funds. Many states already allocated their money to prop up their public-health responses.

Republicans and Democrats are still far apart on measures to include in another round of pandemic aid. Democrats are seeking nearly $1 trillion in aid for cash-strapped states alone, a figure that Republicans oppose as too costly and unnecessary.

It formed part of the $3.4 trillion spending package that House Democrats approved in May to finance extended unemployment benefits, stimulus checks, coronavirus testing, and hospitals.

Both sides agree the federal government should supplement state unemployment insurance, but they’re divided on the amount to approve. Democrats want to restore the $600 weekly aid that was in place from March to July, but the GOP plan would revive it at $300 per week — only half as much.

Trump signed an executive order last month to provide $300 in weekly federal unemployment benefits through the end of the year. Most states are moving slowly in distributing it, as they’re grappling with antiquated benefit systems.

Top congressional Democrats assailed the plan on Tuesday, even before it was formally unveiled. In a statement, Senate Minority Leader Chuck Schumer and House Speaker Nancy Pelosi said, “Senate Republicans appear dead-set on another bill which doesn’t come close to addressing the problems and is headed nowhere.”

Read more: A strategist at the world’s largest wealth manager lays out 4 election-related risks that could damage investors’ portfolios — and shares how to safeguard against each one now, regardless of who wins

They added: “This emaciated bill is only intended to help vulnerable Republican Senators by giving them a ‘check the box’ vote to maintain the appearance that they’re not held hostage by their extreme right-wing that doesn’t want to spend a nickel to help people.”

Negotiations between the White House and Democrats fell apart last month amid fierce disagreements on the amount of federal spending needed to keep the economy afloat. Democrats are pushing for at least $2.2 trillion in further spending.

The latest jobs report on Friday showed the US regained 1.4 million jobs in August, indicating the economy was slowly recovering its footing after a wave of massive job losses stemming from the pandemic earlier this year.

But nearly 29 million Americans are still on unemployment benefits, and experts have warned against a recovery that leaves behind many low-income people, who lost jobs and income at higher rates compared with wealthier people.