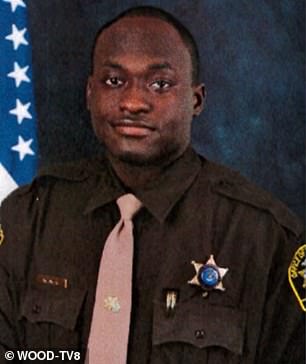 Kenyatta Weaver Jr, 26, resigned last month from the Kent County Sheriff’s Office in Michigan after he lied about his involvement in a hit-and-run crash on July 23

A Michigan sheriff’s deputy who was caught on film last year pulling a gun during an off-duty brawl has resigned after admitting to lying about his part in a hit-and-run accident ‘just to see if I could get away with it.’

Kenyatta Weaver Jr, 26, quit as deputy in the Kent County Sheriff’s Office last month after admitting to investigators that he left his personally owned vehicle at the scene where he crashed into a road sign in July.

At the time of the crash, Weaver was working under a ‘last-chance’ agreement with the department after he was caught lying about his role in a brawl while off duty last year, WOOD-TV reported.

A man who paints road markings on the streets of Grand Rapids told investigators that he was working at around 12:30am on July 23 when he noticed a car ‘flying’ at speeds of at least 100mph south on Jefferson Avenue.

The witness told investigators he called 911 after he saw the vehicle hit railroad tracks near Cottage Grove Street, strike a curb, and then lose control.

When the driver tried to restart the car, he was unable to. He then abandoned the vehicle and fled by foot.

The car belonged to Weaver, who was questioned about the incident by investigators. 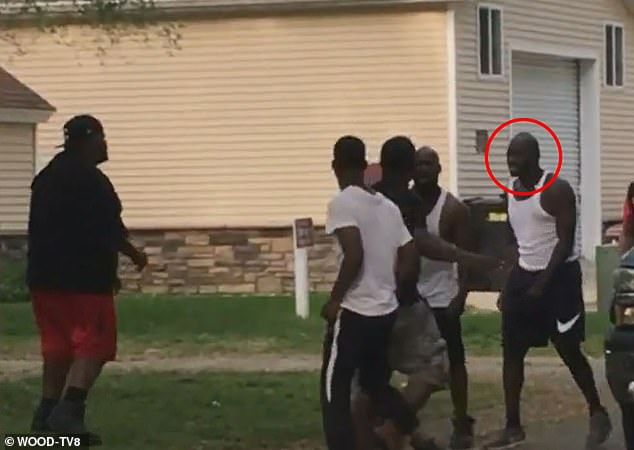 At the time of the crash, Weaver was working on a ‘last-chance’ agreement after he was filmed in June 2019 taking part in a brawl in which witnesses claim he flashed his loaded gun 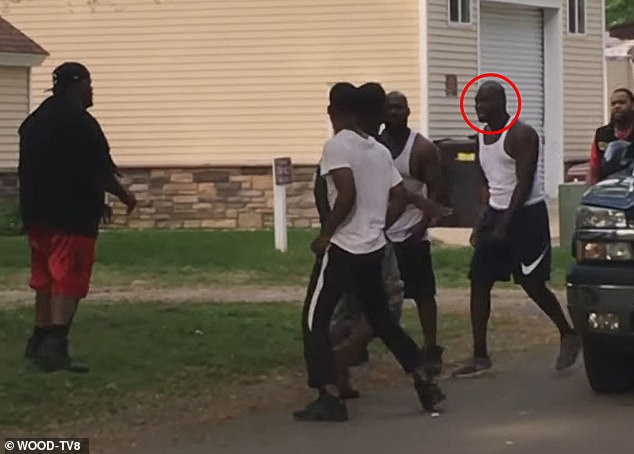 Weaver (seen above with the red circle marking him) and three other men showed up to a mobile home in Byron Township, Michigan, where they confronted the ex-boyfriend of a female relative of one of the men 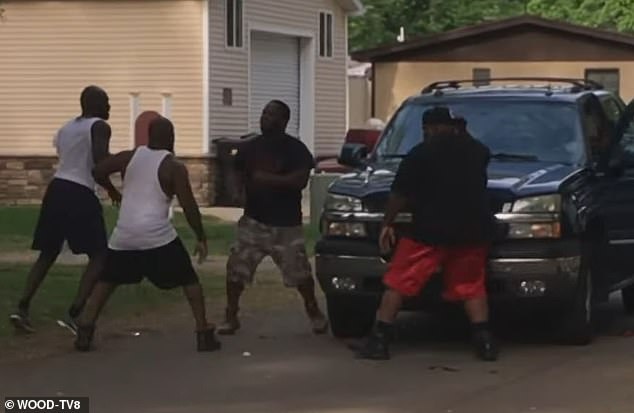 Initially, he denied any involvement. He told police his car was parked on the street outside his home the night before and that he had been drinking at home until he ‘went and passed out.’

Weaver claimed he went to bed at 11pm, some 90 minutes before the crash, according to the police report.

He said he thought his car was impounded because he parked near a fire hydrant.

Weaver then told investigators that someone else had driven his car, but he ‘did not want to press charges or identify the person who had been driving.’

He said he ‘did not want to get the person in trouble.’

Weaver then named three people he believed may have taken his car.

Grand Rapids police obtained a search warrant to look through Weaver’s cell phone, which appeared to ‘contradict’ his statement that he was in bed by 11pm.

The phone shows a text message sent from the device about seven minutes after the crash was first reported.

Weaver resigned as deputy on August 13. A week later, he and his lawyer went to the police department to ‘come clean’ though the attorney, Josh Kuiper, said he didn’t want to discuss ‘alcohol use,’ according to the police report.

In the August 20 interview, Weaver told police he was driving home from Rockwell Republic bar on South Division Avenue when he missed a turn.

He then put the car in reverse and hit a curb, according to the police report.

Weaver claimed he was driving at speeds of up to 50mph, and not 100mph, as stated by the witness.

He said he did not call the police because ‘I think I just panicked,’ according to the police report.

When asked about the earlier claims that he was in bed and someone else had taken his car, Weaver said he told those ‘stories’ because he was ‘just trying to see if I could get away with it.’ 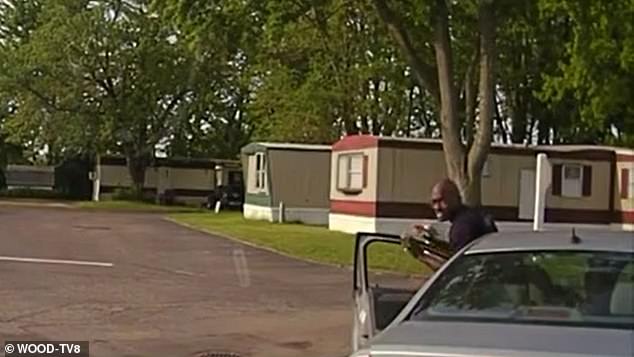 Weaver and the other three men were arrested after deputies chased them down as they tried to get away. He took off his white tank top and switched into another shirt 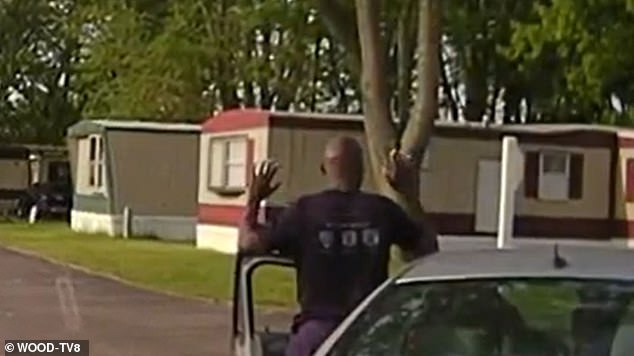 Weaver (seen above during his arrest) claimed that he did not take part in the brawl, even though cell phone video contradicts this 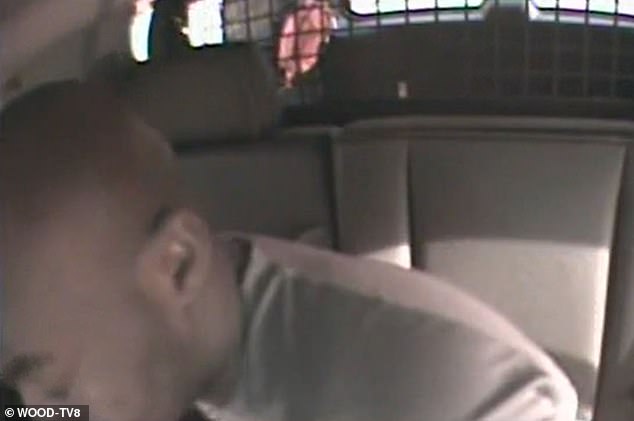 The crash took place about a year after Weaver was filmed in a violent street brawl while off duty.

Weaver is seen in the video wearing a white tank top and blue Nike shorts.

According to witnesses, Weaver pulled a gun during the incident and then lied to responding deputies about his role, according to police reports.

Even though Weaver threw punches and pulled a loaded gun during the incident, he was never criminally charged.

‘A bunch of guys out here, they’re fighting,’ a 911 caller told dispatchers.

‘Now they’re throwing bottles all over the place. Some guy just had a frickin’ gun. There’s kids out here playing.’

Weaver was suspended without pay for four weeks. He was then reinstated under a ‘last-chance’ agreement approved by Kent County Sheriff Michelle LaJoye-Young.

On June 8, 2019, Weaver and three other men showed up at the home of a relative who was kicking out her ex-boyfriend, according to WOOD-TV.

Witnesses said they saw Weaver pull a gun during an altercation. Then one of the neighbors began filming.

‘I shoved my kids in the house and got them inside,’ a 911 caller told dispatchers.

‘There’s so many people out here right now.’

‘Is the weapon on him right now?’ the dispatcher asked.

‘Yeah, I heard him load the weapon,’ the caller answered.

According to neighbors, the ex-boyfriend had been there twice earlier in the day and had threatened the woman.

Weaver admitted to lying about the hit-and-run crash from this past July. He claimed he was in bed at the time of the crash, but a text message from his phone was sent about seven minutes after the crash was reported

In the video, one of them who was with Weaver is seen smashing bottles in the street.

The bottles were believed to have belonged to the ex-boyfriend.

The same man who broke the bottles is also filmed throwing a punch at the ex-boyfriend.

Weaver is then seen joining in by throwing a punch as well. The deputy is then seen chasing the ex-boyfriend around a parked vehicle.

The deputy threw at least one more punch. The ex-boyfriend is then seen punching back.

Deputies then responded to the scene. Weaver and the other three jump into a silver car in front of a mobile home and speed off.

Deputies then give chase and pull the silver vehicle over. At gunpoint, they demand the four men come out one at a time.

According to WOOD-TV, the responding deputies recognized Weaver.

By the time Weaver and the other three men were pulled over, he had already removed his white tank top and put on a thin blue line shirt.

Deputies found the tank top on the floor of the vehicle.

Under the driver’s seat, investigators also found a handgun with 13 rounds in the magazine and another round in the chamber.

According to investigators, the gun was not Weaver’s service weapon.

‘The guys that were fighting took off,’ Weaver told a deputy as he sat in the backseat after he was taken into custody.

Weaver made the comment before he knew there was cell phone video contradicting his statements.

Weaver is also heard coaching another suspect who was also in the backseat.

‘Nah, we weren’t fighting,’ Weaver said. ‘I promise you, the gun was never pulled. No, they were fighting, we were breaking it up.’

‘Say I never pointed it,’ Weaver told him.

Kent County Sheriff’s Office allowed Weaver to continue working after the brawl, saying that he was on a ‘last-chance’ agreement

In his statements to investigators, Weaver admitted that he pulled the gun. He said he did so only after thinking that the ex-boyfriend might try to reach for a weapon.

Instead of being booked into jail, Weaver was allowed to return home.

When asked if Weaver received special treatment by being allowed to go home, sheriff’s officials denied this.

‘Kenyatta was treated like any other citizen at that point in time.

‘The decision was the situation was not necessary to make an arrest.’

Prosecutors later told investigators that they could have charged Weaver with misdemeanor assault, but the victim refused to cooperate.

There were no criminal charges filed.

‘It’s hard to proceed on an assault and battery charge when you have victims who don’t want to participate in the court proceedings,’ Kent County Prosecutor Chris Becker said.

When asked if Weaver could have been charged with brandishing a weapon, Becker said: ‘Brandishing requires some sort of showing, show of force, pointing it around, there’s no evidence he did that.’

Becker said his office does not normally charge people with lying to the police in misdemeanor cases.

He said people are charged with lying only if police are led to pursue false leads in an investigation.

‘People lie to the police all the time initially,’ Becker said.

‘Once they come clean at the scene, most of the time we don’t charge.

‘In terms of criminal cases, this is right in line with what we usually do,” he said.

‘No special treatment from our end. None whatsoever.’