The shocking footage shows a woman almost being hit by train as she tried to cross the tracks with a pushchair.

The woman who was lucky to escape, was strolling obliviously with a pram, across the railway line to get to the other side of the station.

The shocking moment was took place at Hilsea station, near Portsmouth, Hants and was captured by cameras onboard the train that heading to London Waterloo.

It shows the woman walking with a pram  buggy towards the end of the platform and attempting to cross over the railway lines, being narrowly missed by the incoming train. 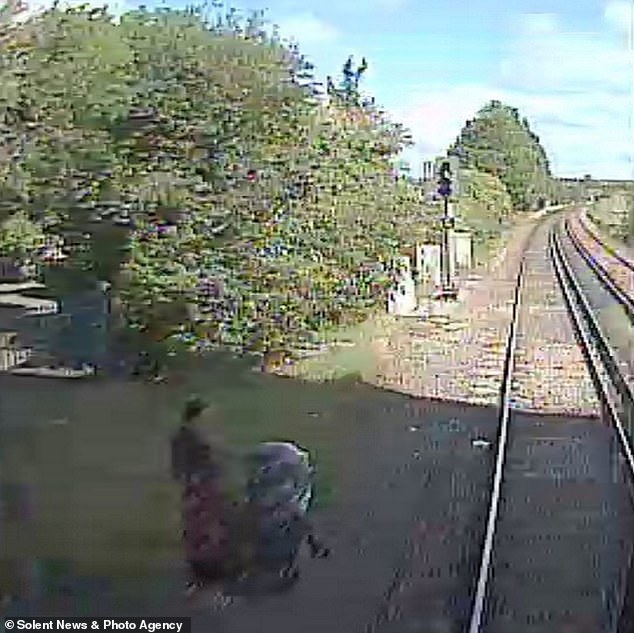 The woman was captured by cameras onboard the train, heading to  London Waterloo

Following the incident that took place on August 29, the rail operator released the footage today, warning passengers about trespassing on the railway.

Mark Killick, Network Rail Wessex route director said: ‘The behaviour at Hilsea station is deeply concerning and shows that people are completely oblivious to the dangers they are putting themselves in.

‘This incident could have easily ended in tragedy, and the lives of the woman’s family and that of the train driver could have changed forever.

‘It is absolutely vital no-one should ever attempt to either get close to or cross the track.’

He said: ‘Near misses like this one at Hilsea station can also seriously affect the train drivers who witness these incidents. We’re glad no-one was injured, but this woman had a very lucky escape.

‘You may think walking across the tracks will save time, but it could cost your life.’