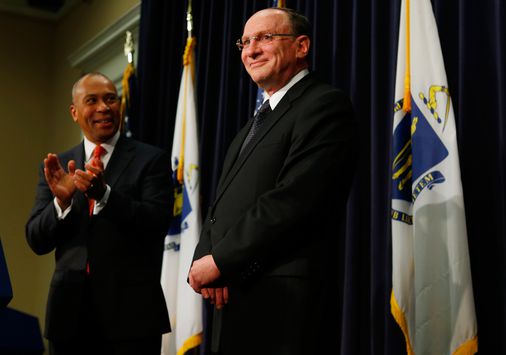 “I can’t believe he’s gone,” Lenk said, describing Gants as a “mensch of mensches” who always looked out for “the little guy” and was “just always sensitive to the people who have the least.”

Gants, Lenk said, was “just brilliant. Brilliant in every respect, and a wonderful man. A wonderful human being, and humble. … He just treated everyone with respect and dignity” and “had an unerring sense of justice.”

Governor Charlie Baker said in a statement, “I am shocked and deeply saddened by the passing of Chief Justice Ralph Gants. He was a dedicated public servant of the highest order and sought to do justice his entire 40-year legal career. He led the Supreme Judicial Court with intelligence, integrity and distinction.”

“In his decisions and in his role as the leader of the Commonwealth’s judicial branch, he always worked to promote the public good. His legacy as a judge and as Chief Justice is profound, and he will be sorely missed. I send my condolences to his colleagues, his friends, and his family,” Baker said.

Gants disclosed last week that he had suffered a heart attack on Sept. 4, and had undergone surgery to insert two stents. He said at that time that he expected to be discharged soon and that he would “resume full duties, albeit initially on a limited basis.”

Justice Frank M. Gaziano had said as recently as Friday that Gants, while not in attendance at a virtual hearing, expected to participate in a decision on Governor Charlie Baker’s emergency authority amid the coronavirus pandemic.

Gants was appointed to the SJC in January 2009 after serving 11 years as a Superior Court judge. He was sworn in as chief justice in July 2014 after being nominated by then-Governor Deval Patrick. Born in New Rochelle, N.Y., Gants previously served as a federal prosecutor in Massachusetts and was in private practice at the firm formerly known as Palmer & Dodge LLP.

Robert J. Cordy, who served for 16 years as an associate justice on the Supreme Judicial Court, recalled Gants’s dedication to justice.

“We served in the US attorney’s office together in the 1980s and I have always had the highest regard for him as a person, a lawyer and a judge who cared deeply about ensuring that our system of justice was indeed just and fair to everyone,” Cordy said in an e-mail to the Globe.

“Chief Justice Gants was an exceptional leader who had a true commitment to innovative ideas and an unwavering passion for improving the court system,” Ryan said in a statement. “As both his friend and colleague, I was always impressed by his compassion and empathy, he fully appreciated the highly personal and human impact of the work he was doing every day. It was these attributes which allowed him to accomplish so much and to have such a profound impact. My thoughts are with his wife and two children, of whom he was so very proud.”

“The legal community finds itself in a state of shock as word quickly spreads of the untimely passing of Chief Justice Gants,” Healy said, adding that the judge was “an avid soccer player and led a healthy lifestyle before suffering a recent heart attack just weeks ago.”

Healy described Gants as “an unparalleled leader on civil liberties and individual rights with a deeply embedded concern for the humanity of the justice system.”

Said Solana Goss, director of foundation programs for diversity and equity and inclusion at the Boston Bar Association, tweeted that Gants was a believer in equitable justice.

“Deeply saddened to hear about the passing of Chief Justice Gants,” Goss wrote. “He led with compassion and fairness, and was a longtime advocate for access to justice for those who could not afford it.”

Anthony Benedetti, head of the Committee for Public Counsel Services, said in a statement that Gants was “a wonderful person who treated everyone with respect and dignity. He was a brilliant, thoughtful jurist who was fair to every litigant who appeared before him. This is a devastating loss to the court, the legal system and the commonwealth. There is no doubt that Chief Justice Gants forever left a mark on the SJC. We offer our sincere condolences to his family and friends.”

And Carol Rose, executive director of the ACLU of Massachusetts, offered condolences to Gants’s family, friends and colleagues.

“Justice Gants was a giant within the legal community, and a courageous leader on civil rights and civil liberties,” Rose said in a statement. “He was a champion of access to justice for all communities in Massachusetts, a fierce believer in the need to address racial disparities in the criminal legal system, and a compassionate listener to every person who came before the court. His legacy is a testament to his wisdom, his kindness, and his commitment to equal justice under the law.”

George Bachrach, founder of the Civic Action Project and a former state senator, said via email that he and Gants were “decades long friends” and former high school classmates.

“When he was being considered for the Associates position on the SJC, he sought my counsel,” Bachrach wrote. “I told him he was the best choice, but he offered the Governor absolutely no political benefit in terms of race, gender or geography. The only basis for his nomination would have to be on merit, a rarity. But that’s precisely what Gov. Patrick did.”

Bachrach continued, “his work on ‘access’ to justice was his hallmark. Justice for all. Most recently he was focused on the human disaster we face in the coming weeks when the ban on evictions ends. He knew the housing court would be flooded, but more importantly, he was pained by the human tragedy to come of thousands left homeless. Fixing this was not his job, but he couldn’t walk away. That was Ralph.”

Bachrach also noted that Gants had been in “great shape” prior to his passing.

“He walked, biked and swam regularly,” Bachrach wrote. “When I couldn’t keep up with him on one of his endless rides, he let me down easily and insisted the problem was my bike. … If that wasn’t enough, he took me to meet his ‘bike guy’ in a basement in Woburn for a ‘new’ secondhand bike. But I still knew I would never keep up with Ralph.”

Gants received his bachelor’s from Harvard College in 1976 and graduated four years later from Harvard Law School, according to his biography on the official state website.

He began his legal career clerking for US District Court Judge Eugene H. Nickerson and later served as a special assistant to former FBI Director William H. Webster, the bio says. Gants also served as a federal prosecutor in Massachusetts in the US attorney’s Public Corruption Unit before moving on to private practice, according to the biography.

While an SJC justice, the bio says, Gants served as co-chair of the Massachusetts Access to Justice Commission and also sat on the board of directors for the Conference of Chief Justices, and he chaired the conference’s Access and Fairness Committee.

Iván Espinoza-Madrigal, executive director of the Boston-based Lawyers for Civil Rights, said his group was “deeply saddened” by Gants’s passing.

“Just months ago, as the pandemic hit, Justice Gants expressed a commitment to ‘keep the wheels of justice turning’ in the midst of COVID-19,” Espinoza-Madrigal said in a statement. “His leadership helped to keep courthouses available for judicial redress during the pandemic. More recently, amid protests against police brutality and racism, Justice Gants joined other justices in calling for judges and lawyers to root out bias in the criminal justice system. His leadership on access to justice and fairness will be missed.”

This is a breaking new story and will be updated. Travis Andersen of the Globe Staff contributed.