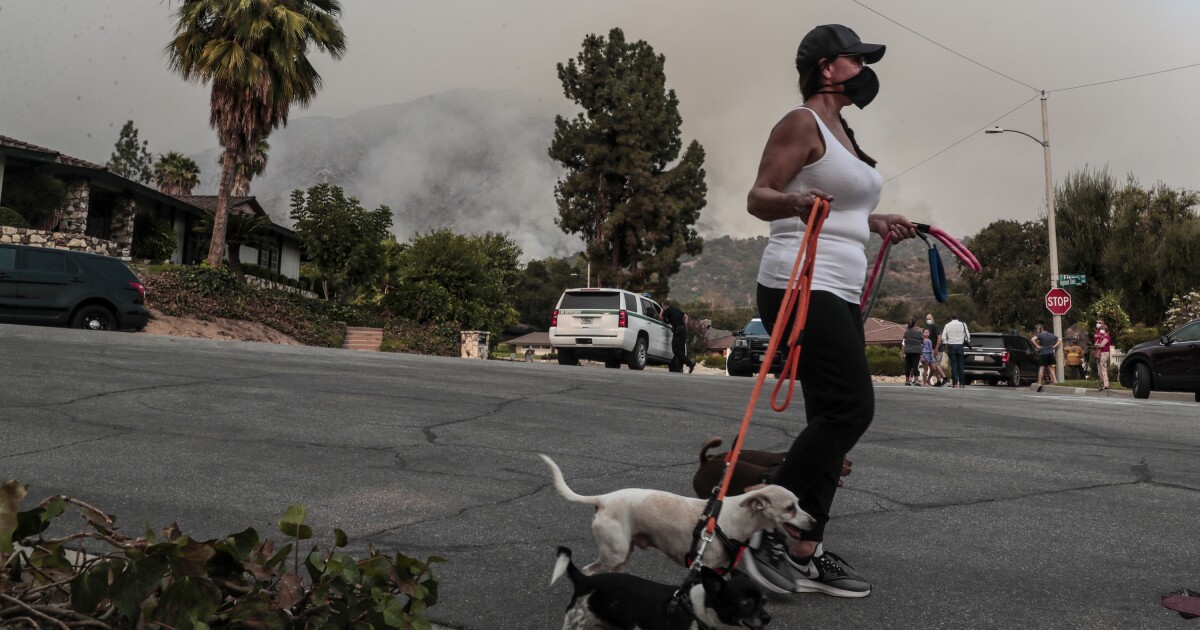 Smoke and ash from the Bobcat fire burning in the Angeles National Forest have blanketed the region for a week, contributing to poor air quality, hazy skies and burning odors.

And residents, many of whom were already feeling confined amid stay-at-home orders during the COVID-19 pandemic, say it’s taking a toll.

“It’s a boxed-in feeling,” said Carole J. McCoy, an artist who lives in North Hollywood. “Not being able to go outside, because I have asthma and allergies, takes away the one thing that was a sense of freedom and peace.”

McCoy said she has lived in L.A. long enough to see and feel “a significant shift in the weather,” and described the air in her neighborhood Monday as a “sheer, dusky, powdery layer of particles and smoke.”

The South Coast Air Quality Management District extended a smoke advisory through Tuesday for most of Los Angeles County and parts of Orange, Riverside and San Bernardino counties, noting that the air quality index remains in the unhealthy range for the San Gabriel Valley.

The Bobcat fire ignited Sept. 6 and is one of more than 25 fires burning in the state. Smoke from Northern and Central California fires created a plume that spanned more than 1,000 miles and blanketed much of the West Coast, said Philip Fine, deputy executive officer of the South Coast AQMD, last week.

Current air quality readings in Los Angeles are hovering in the 150-200 range, which is considered unhealthy for sensitive groups, according to Environmental Protection Agency air monitoring site AirNow. The air quality index, or AQI, is reported on a scale of 0 to 500, with zero representing good air. Measurements higher than 301 are considered hazardous. The forecast for Tuesday looks much the same.

Smoke is so strong in parts of eastern L.A. that coronavirus testing sites at the Pomona Fairplex and the San Gabriel Valley airport have been closed.

Pasadena City College also closed its campus Monday because of smoke, and the L.A. Zoo and Los Angeles County Arboretum remain closed for the same reason.

“Air quality is very poor, and there has been a strong, burning, mesquite-like smell for several days,” Altadena resident Kevin Lingenfelser said Monday.

Lingenfelser and other residents of eastern Los Angeles and the San Gabriel Valley foothill communities of Monrovia, Bradbury, Altadena, Duarte, Pasadena and Sierra Madre remain under an evacuation notice as the Bobcat fire has shifted southwest toward Mt. Wilson and the Chantry Flat area.

Portions of Arcadia and Sierra Madre — north of Elkins Avenue and east of Santa Anita Avenue — were under mandatory evacuation orders Sunday afternoon. Lingenfelser said he, his wife and two daughters have “packed just in case.”

“The smell is incredibly strong,” he said. “We didn’t have smoke the way we do today with the Station fire [of 2009], and that fire was much, much closer to us.”