Smoke from a spate of devastating wildfires blazing in the West Coast has blown thousands of miles across the country covering New York, the Midwest and Canada.

California, Oregon and Washington state are battling fires of historic proportion, that have razed over 4.6million acres and left 36 people dead.

The intense smoke as blanketed San Francisco in orange and greyish smoke and winds are moving that smoke eastward.

Wind has blown medium smoke coverage across upper western US to Michigan and the Great Lakes region and over Rochester, New York.

Wind has also pushed medium smoke southwest to Missouri, Illinois and Kentucky, and light smoke coverage ending in the Mid-Atlantic, according the National Oceanic and Atmospheric Administration’s Office of Satellite and Product Operations. 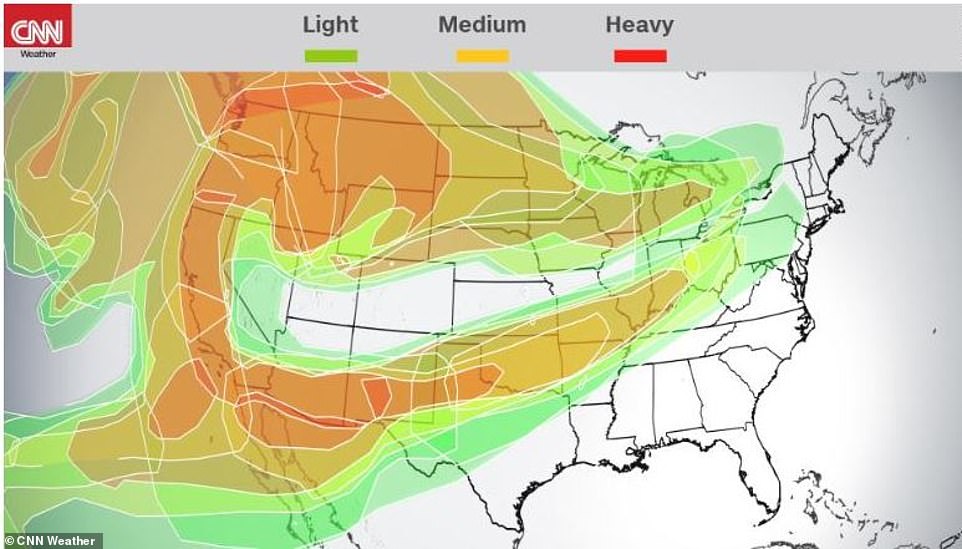 Smoke from a spate of devastating wildfires blazing in the West Coast has blown thousands of miles across the country covering New York, the Midwest and Canada. This map shows how medium smoke coverage is affecting Illinois, Michigan, and light smoke coverage is hitting the East Coast 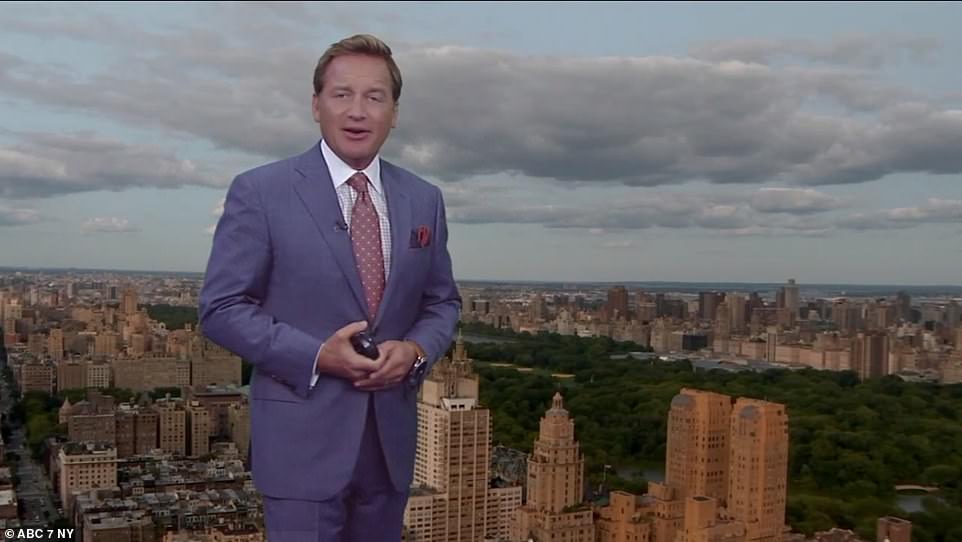 ‘Even though we have a sunny and dry forecast coming up, don’t be surprised if it’s more of a milky sun, or filtered sun,’ Meterologist Lee Goldberg with ABC7 said of smoke coverage effecting New York City Monday 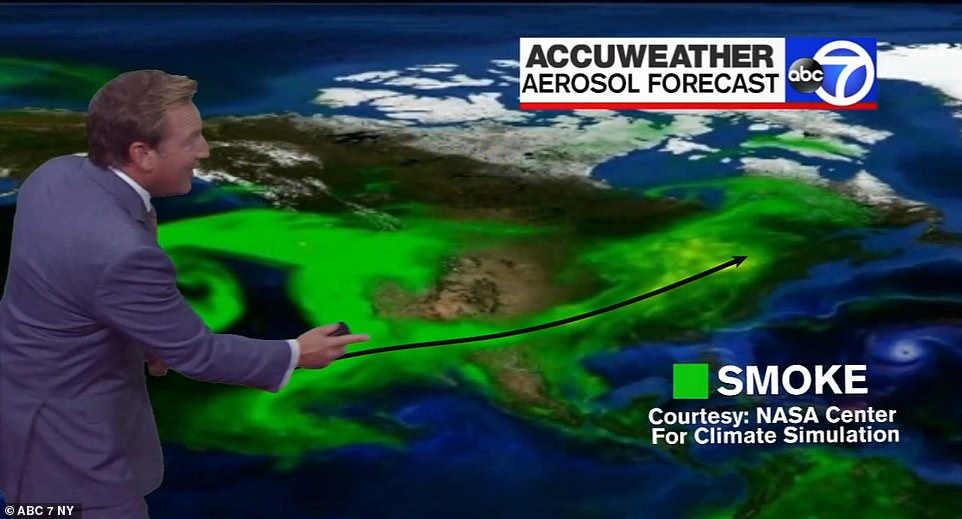 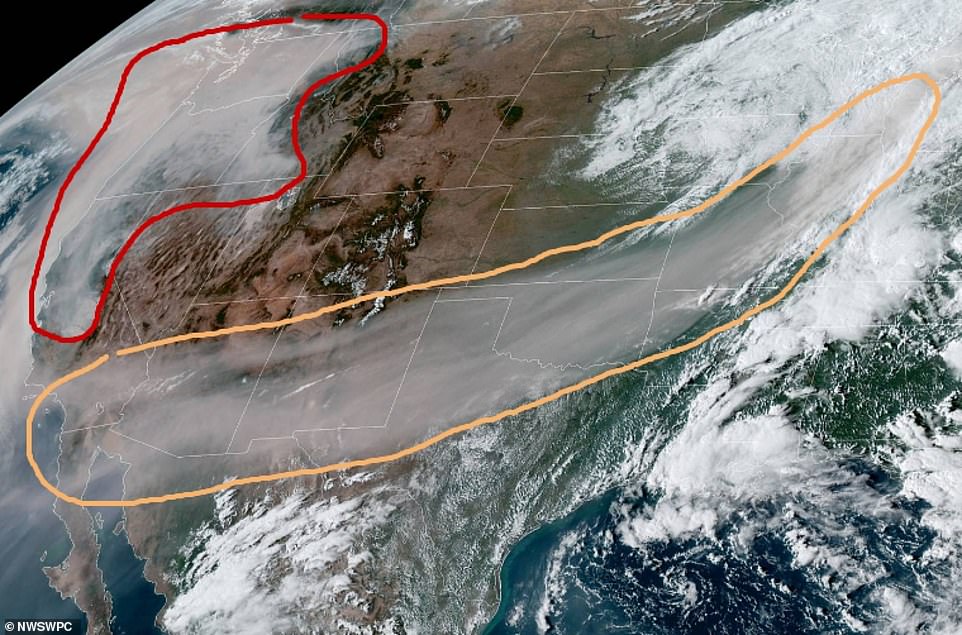 Satellite imagery on Saturday showed an area, marked orange, of smoke that has reached as far east as Michigan, about 2,000 miles away from the West Coast

The only states spared from the cover are Nevada, Utah and Colorado.

There are currently 87 large wildfires burning in 10 states, according to the National Interagency Fire Center.

On Monday New York City saw a hazy sky as a result of the incoming smoke. New England is anticipated to see the brownish haze on Tuesday again.

Meteorologists say with dry Canadian air headed out way we would normally see cobalt-blue skies, but instead the Big Apple saw clouds and hazy.

‘Even though we have a sunny and dry forecast coming up, don’t be surprised if it’s more of a milky sun, or filtered sun,’ Meterologist Lee Goldberg with ABC7 said.

‘Been thinking it’s been oddly overcast in NYC today without any rain forecast. Then I looked up at the sun and saw that it was red. Guys- that’s the smoke from the west coast. It’s making the sky in NEW YORK hazy,’ one Twitter noted.

‘Wow the sky in New York is super hazy this morning from the west coast fires as predicted. Forecast was supposed to be sunny,’ another added. 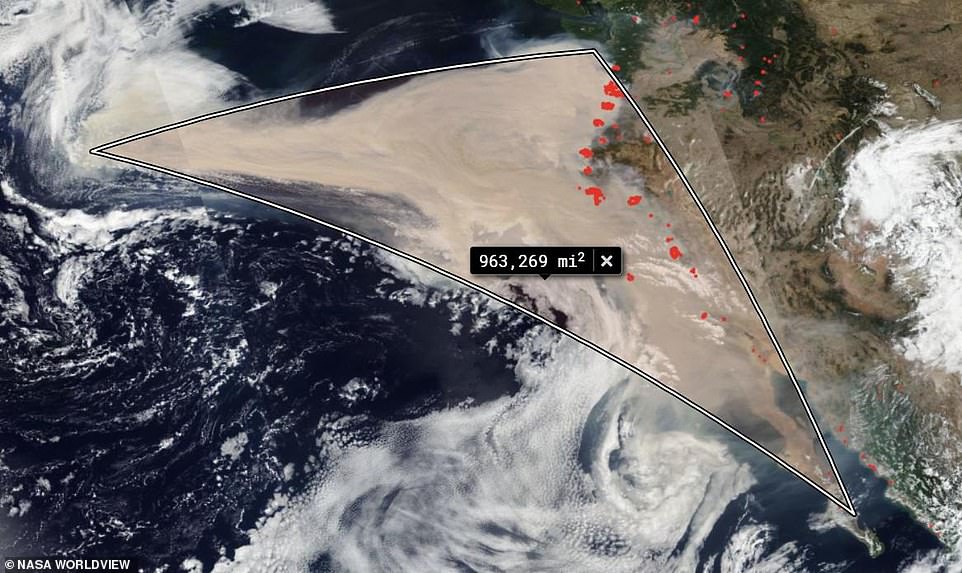 The smoke was blanketing an area of almost one million square miles, according to new photos 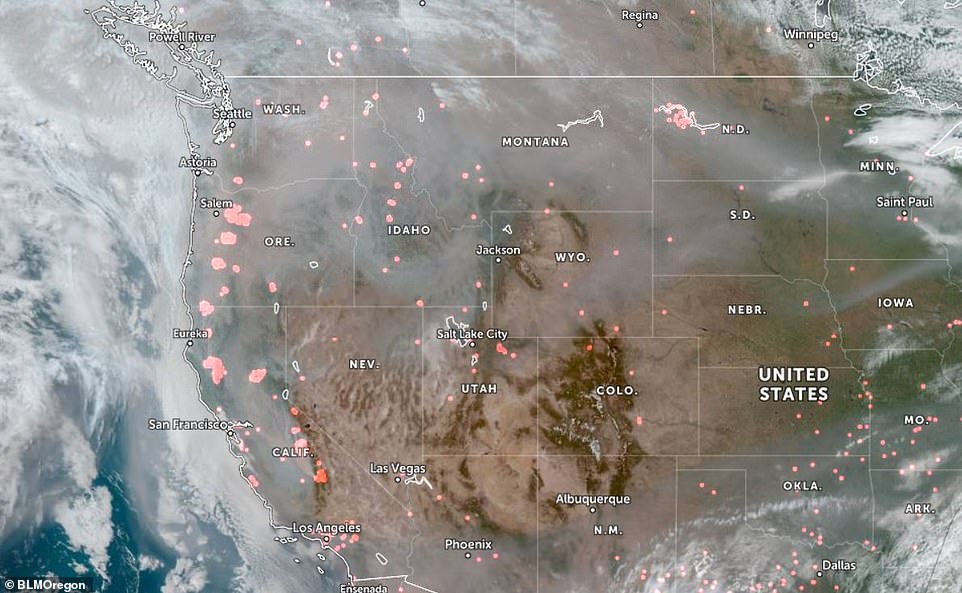 Oregon’s Bureau of Land Management produced a map showing the fires in red, concentrated in Oregon and California

One man shared a photo of the grey and orange streaked smoke over the Hudson River saying: ‘We’re all connected. The smoke from the West Coast fires have reached New York City. The sky was hazy and the sun appeared like a flat disc, trying desperately to shine through.’

The haze coming to the East Coast hasn’t impacted the airquality in most eastern states.

From North Dakota to New York air quality is still considered ‘good’ in areas where smoke has travelled, according to CNN.

The National Weather Service Weather Prediction Center shared a startling satellite image on Saturday showing smoke billowing across the West, right into Michigan – a distance of around 2,000 miles.

‘Here is a visible satellite image valid at 2pm PDT showing the vast extent of the wildfire smoke,’ the agency tweeted on Saturday.

‘The area in the orange contour is smoke in the mid-upper levels of the atmosphere that has reached as far east as Michigan! The red contour is the dense smoke near the West Coast.’

Meanwhile residents of Oregon, Washington and California are suffering the worst, most unhealthy air on the planet according to some measurements under the swathe of yellow and orange smog. In those states the air quality is considered hazardous, according to AirNow, an air quality database maintained by government agencies. 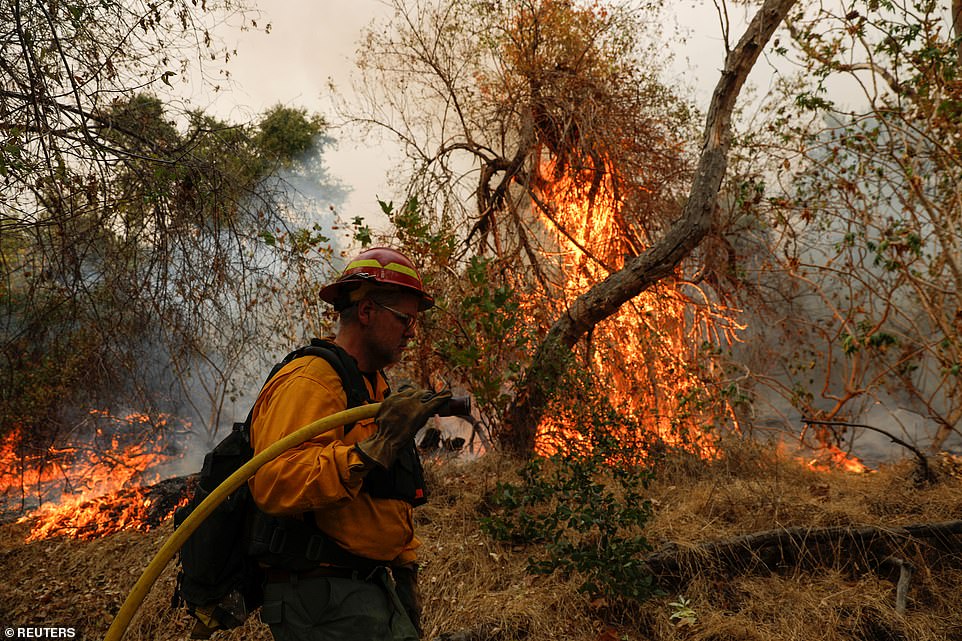 A firefighter in California is pictured on Saturday attacking the Bobcat Fire, near Arcadia 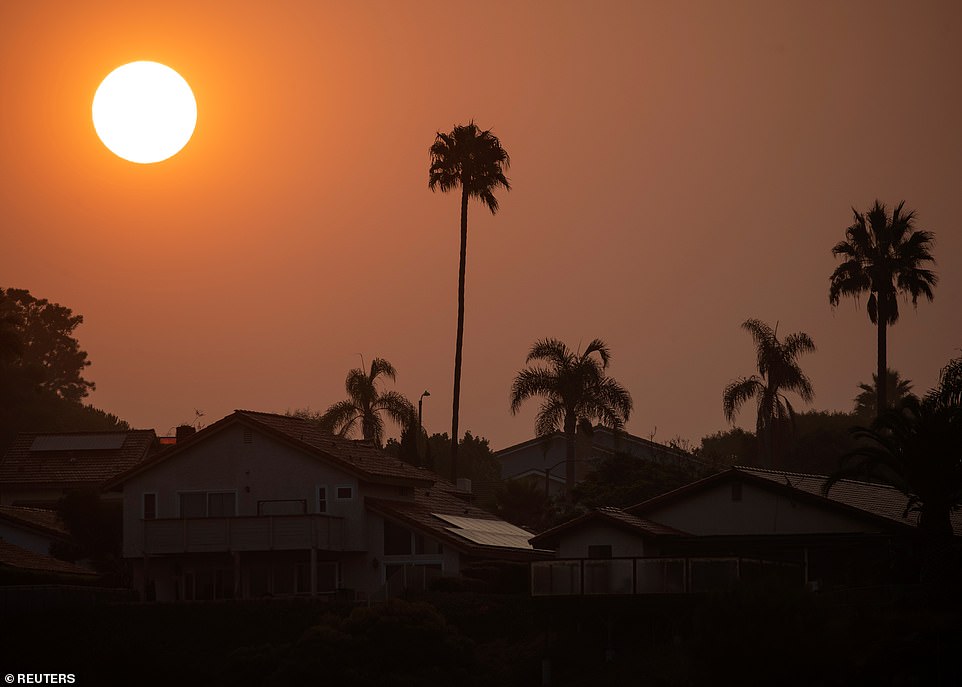 Skies above Encinitas, California, were thick with orange smoke on Sunday morning 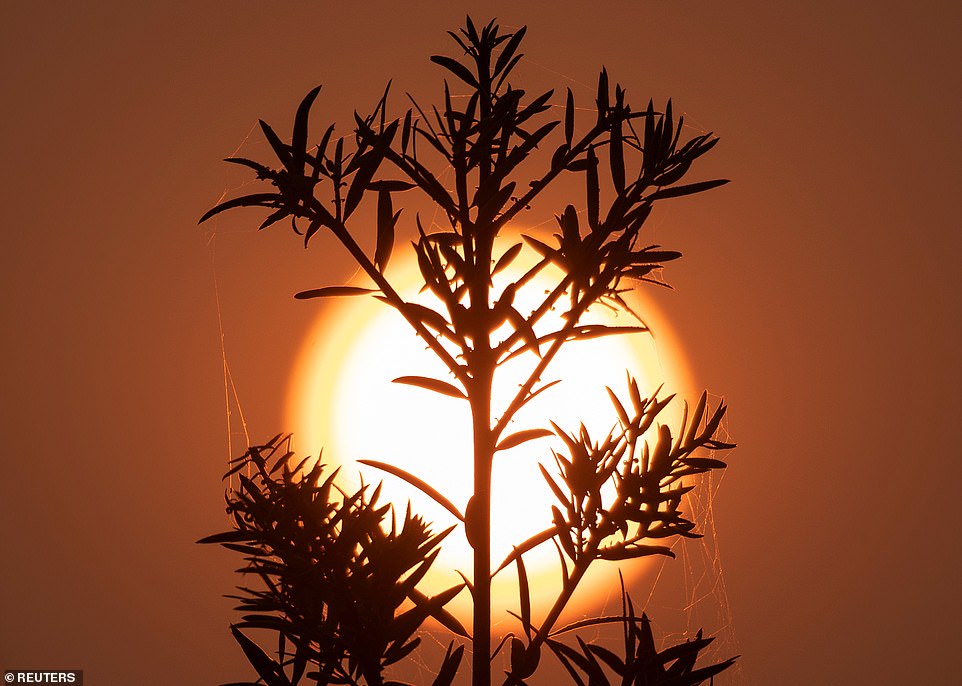 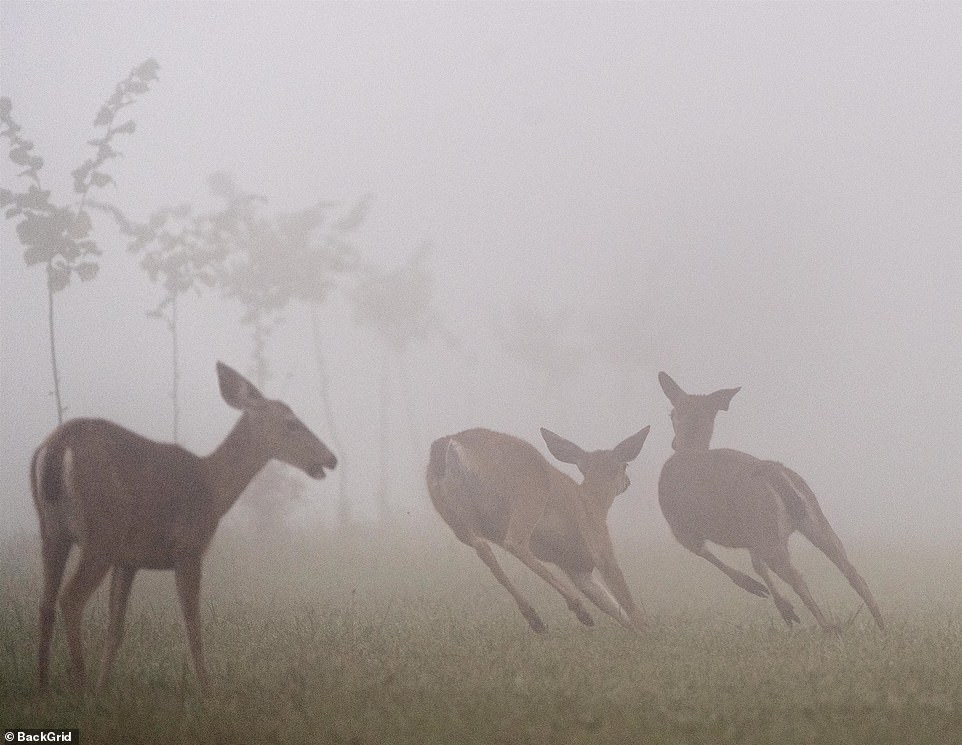 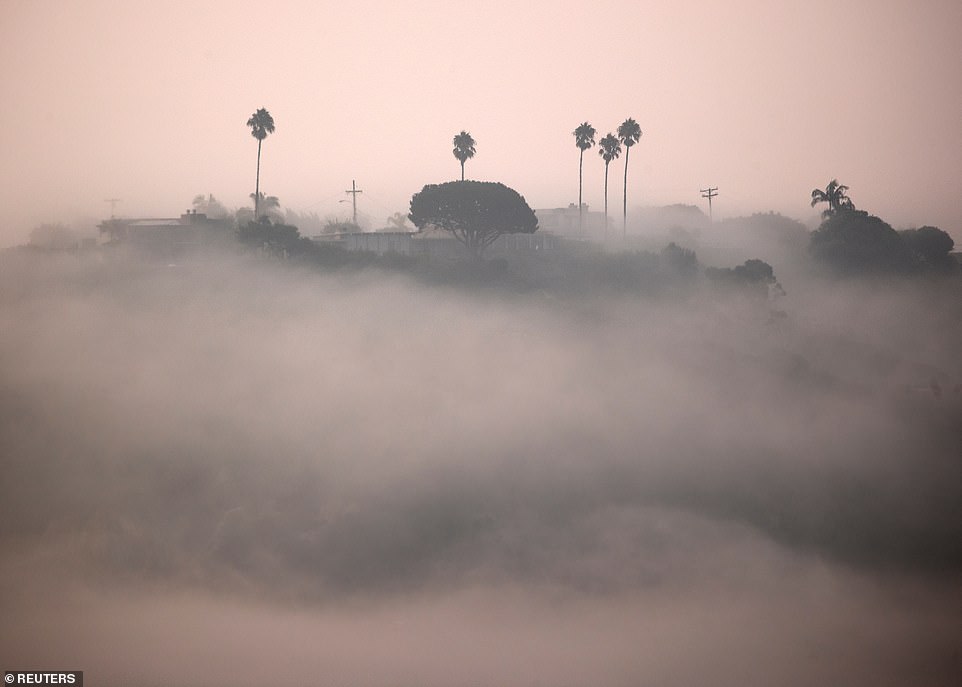 Oregon’s Department of Environmental Quality extended an air quality alert to Thursday after it was to initially expire on Monday.

Alaska Airlines announced it was suspending service to Portland and Spokane, Washington due to the foul skies through Tuesday 3pm local time.

‘Across the West, fires are creating thick smoke and haze, causing very poor air quality conditions in the Portland and Spokane areas. We made the difficult decision to stop our operation so that our employees and guests can remain safe,’ the airline said.

‘I grew up in Oregon and lived here a long time, and to see this much smoke for this long and wide spreading, really stands out in the state’s history,’ Dylan Darling, a spokesman for the state’s department of Environmental Quality, said.

Some areas in central California suffering from smoke may not see relief until October, according to Dan Borsum, an incident meteorologist for a fire in Northern, California. 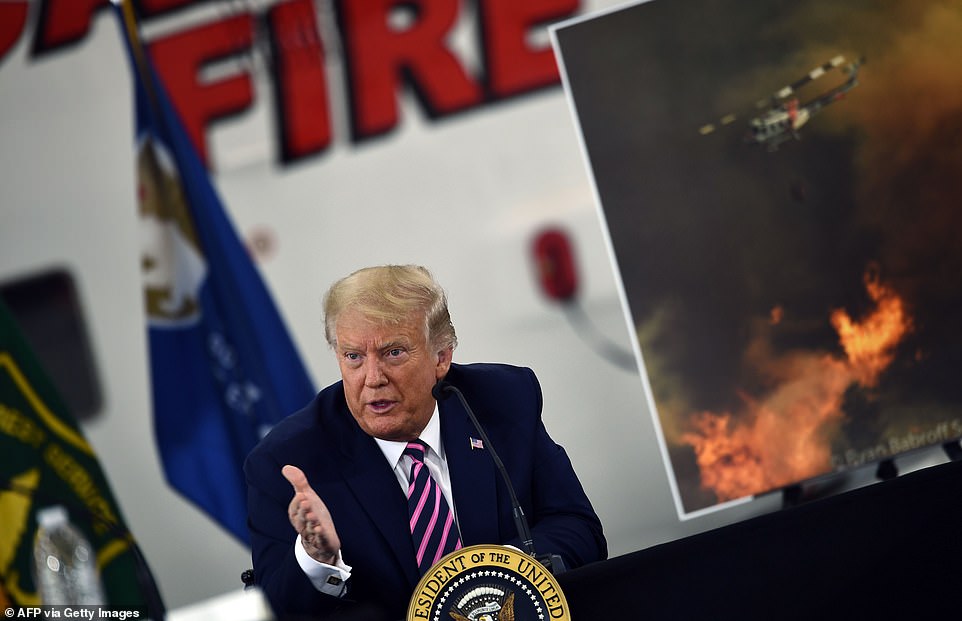 The governors of California, Oregon and Washington have all said global warming is priming forests for wildfires as they become hotter and drier. But during a visit Monday to California, President Trump pointed to how states manage forests and said, ‘It will start getting cooler, just you watch’ 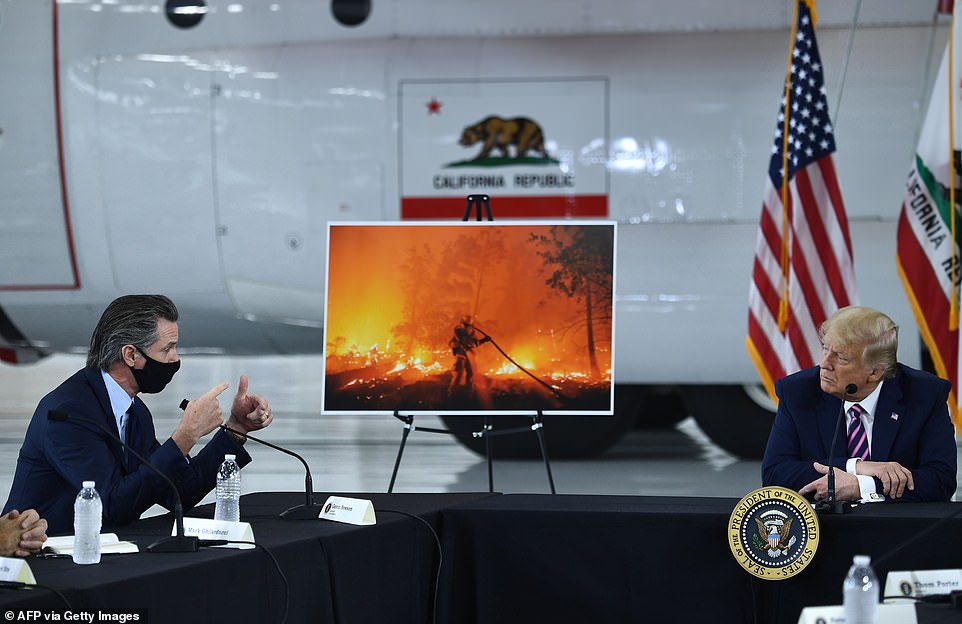 Trump and Gov. Gavin Newsom pictured speaking at Sacramento McClellan Airport on Monday during a briefing on wildfires 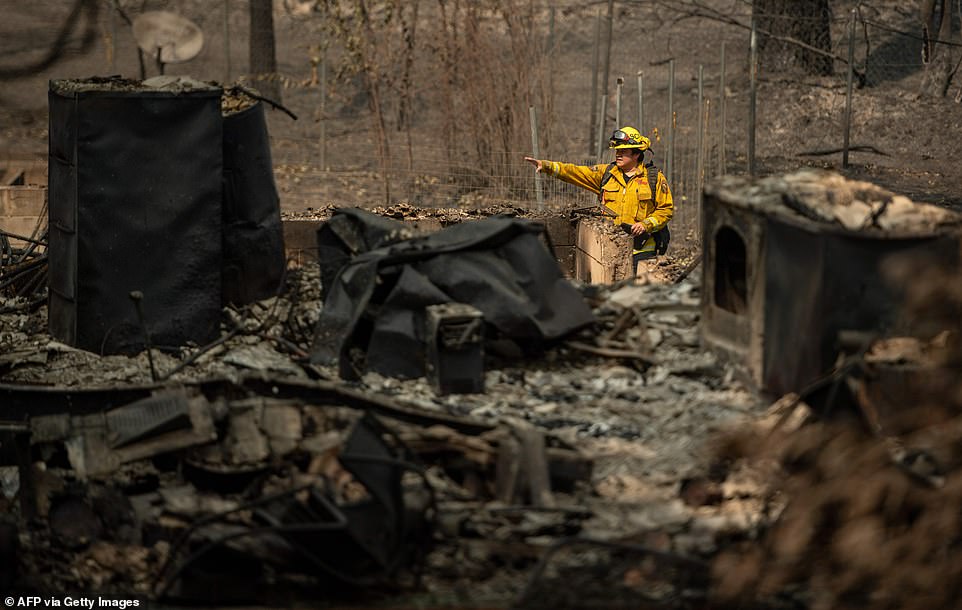 Firefighters search through a burned residence after the passage of the Bear fire, part of the larger North Lightning Complex fire, in the Berry Creek area of unincorporated Butte county, California on Monday 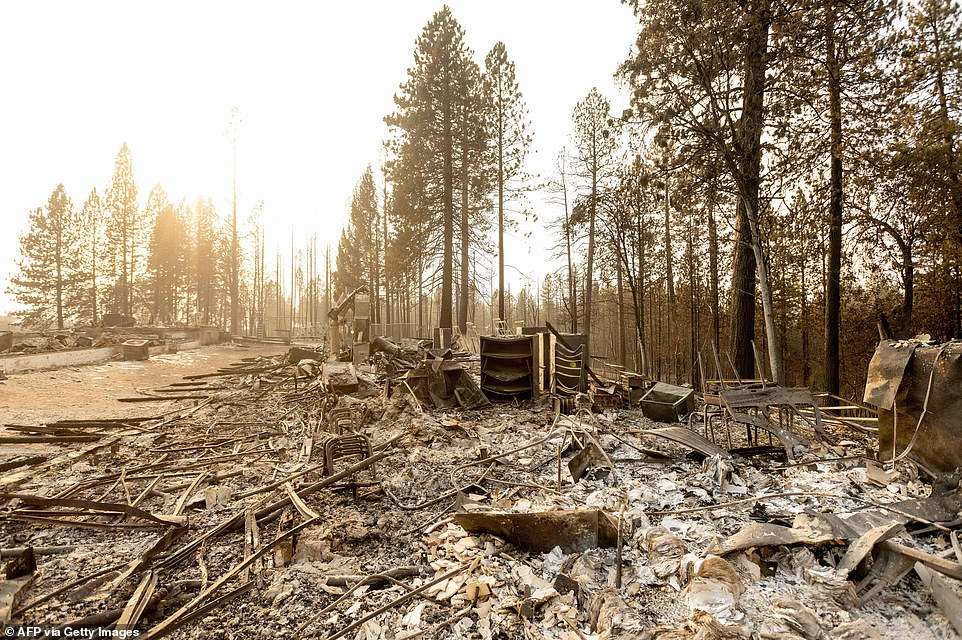 The governors of California, Oregon and Washington have all said global warming is priming forests for wildfires as they become hotter and drier. But during a visit Monday to California, President Trump pointed to how states manage forests and said, ‘It will start getting cooler, just you watch.’

‘There has to be good strong forest management. So hopefully they’ll start doing that,’ Trump said when he landed in Sacramento, refusing once again to acknowledge that climate change may play a role in the increasingly common wildfires.

‘We’ve had temperatures explode this summer. We broke a record in the Death Valley, 130 degrees,’ Crowfoot said.

‘We’re seeing this warming trend make our summers warmer and our winters warmer. We want to work with you to recognize our changing climate.

‘If we ignore that science and out our heads in the sand and think it’s all about vegetation management, we’re not going to succeed in protecting Californians.’ 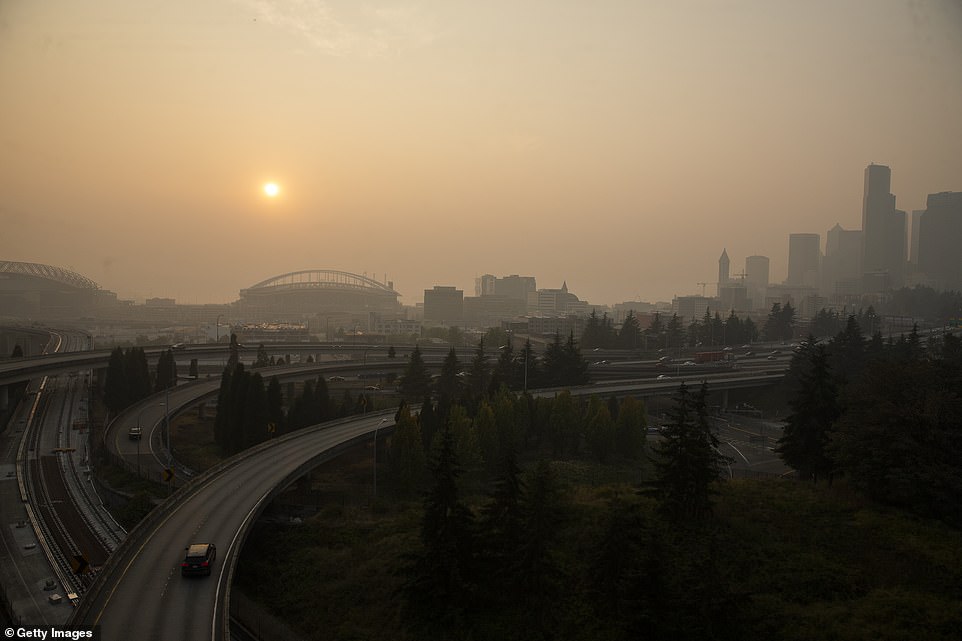 The hazy orange and gray sky over Seattle, Washington due to severe wildfires pictured above 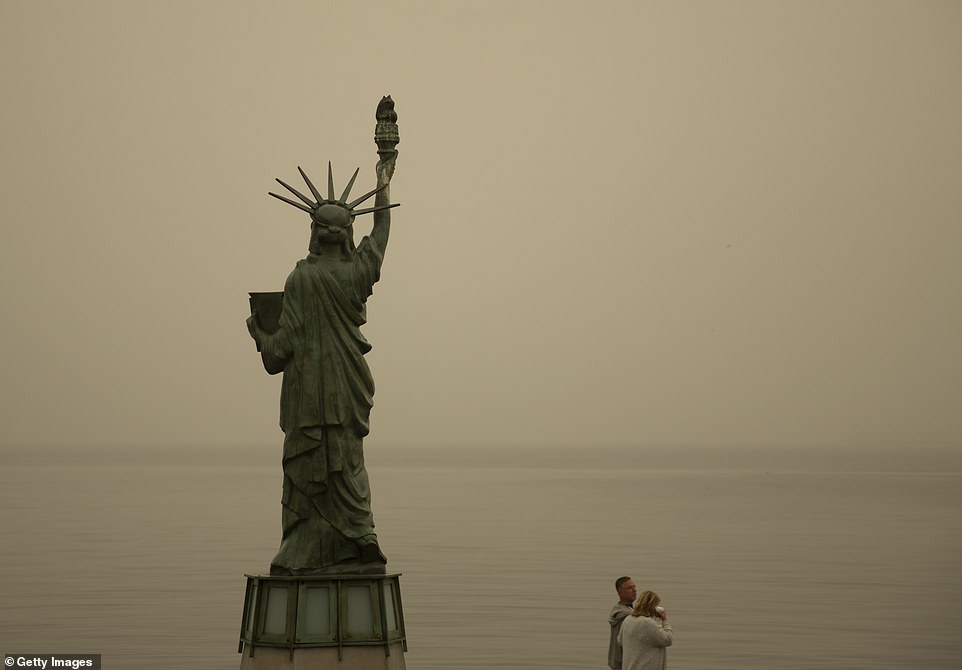 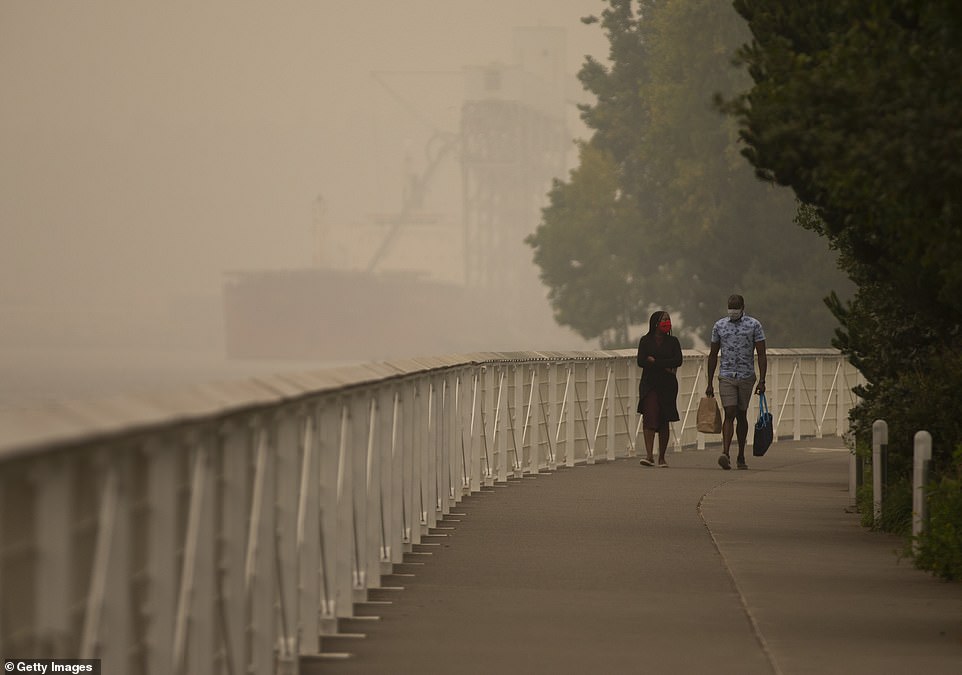 Crowfoot replied: ‘I wish science agreed with you.’

In Oregon forests have burned at an unprecedented level this past week with megafires scorching 100,000 acres or more. The fires are fuelled by low moisture and strong winds and wildfire-prone conditions are in effect through Tuesday.

In Oregon nearly three dozen fires were active Monday night and around one million acres had burned with more than 1,100 residences confirmed destroyed.

At least 10 people have been killed in Oregon and officials say more than 20 are missing and the number of fatalities is likely to rise.

In California 25 people have died and one person was killed in Washington state.

In California, where more than 16,500 firefighters are battling 28 major wildfires.

The death toll grew by one Monday after officials discovered the remains of someone believed killed by the blaze in Butte County, Sheriff Kory L. Honea said.

The state’s deadliest fire is the North Complex in the Sierra Nevada Mountains north of Sacramento which has killed at least 15 people.