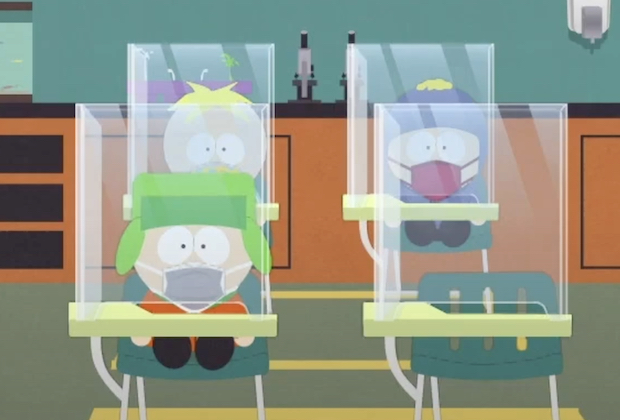 South Park Elementary is forgoing remote learning — and Eric Cartman is not having it.

Comedy Central announced Tuesday that it will air an hour-long South Park episode focused on — what else? — the coronavirus crisis on Wednesday, Sept. 30 at 8/7c. The network also released a teaser trailer for the standalone special that finds everyone but Cartman returning to class, which is now being taught by Detective Harris. Desks are separated by six feet and have preinstalled plastic shields, to prevent the spread of germs.

According to the special’s official synopsis, Stan’s father “Randy comes to terms with his role in the COVID-19 outbreak, as the ongoing pandemic presents continued challenges to the citizens of South Park.” Meanwhile, the kids “happily head back to school, but nothing resembles the normal that they once knew — not their teachers, not their homeroom, not even Eric Cartman.”

Comedy Central has yet to announce when viewers can expect Season 24 of South Park — but, per the terms of its recent HBO Max library deal, new episodes (including the upcoming special) will be available to stream on South Park Studios, CC.com and the Comedy Central app immediately following the west coast airing. HBO Max will then stream the episodes 24 hours after they premiere. (The series was previously renewed through Season 26.)

The one-off South Park special is the latest news out of Comedy Central, which is dramatically altering its original programming strategy to focus on adult animation. Cartman & Co. will soon be joined by Daria spinoff Jodie and reboots of Beavis & Butt-Head and Ren & Stimpy.

Press PLAY on the teaser trailer above, then tell us if you’ll be tuning in for South Park‘s COVID-centric special.