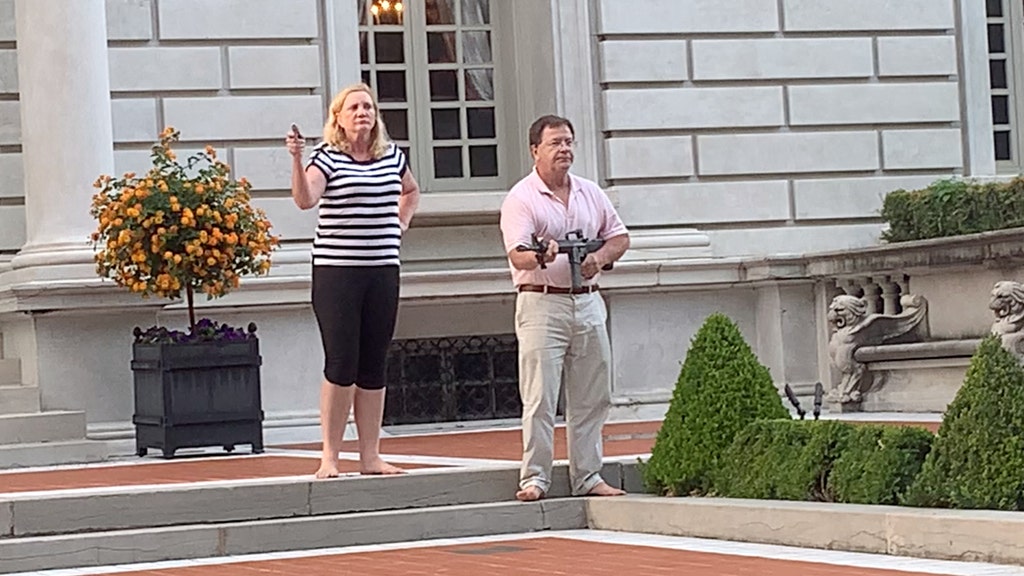 Nine Black Lives Matter protesters who were confronted by an armed St. Louis couple on their lawn have been issued citations for trespassing, officials told Fox News.

The June 28 encounter between the demonstrators, and Mark and Patricia McCloskey made headlines as the country was gripped by nationwide protests over police brutality. The couple — both personal injury lawyers — were seen on video and in photos pointing a handgun and a rifle as demonstrators moved through their neighborhood.

MCCLOSKEYS: ‘THERE’S A REAL ARMY OF SECRET TRUMP VOTERS OUT THERE’

No shots were fired.

Calls and emails to the St. Louis Metropolitan Police Department from Fox News were not returned.

The office of City Counselor Julian Bush told Fox News in an email that the citations were mailed to the nine people but that Bush has “not yet determined whether to file charges.”

FLORIDA MAN WHO BRANDISHED GUN AT BLM PROTEST WAS ‘LAWFULLY DEFENDING HIMSELF’; NO CHARGES FILED: POLICE

The protesters could face up to $500 in fines and up to 90 days in jail. However, Bush told NPR it was rare for anyone to receive such penalties for a municipal ordinance violation.

“I was just sent a summons to appear in court for “trespassing on private property” on Portland Pl aka the street Patricia and Mark McCloskey live on,” the post read. “I had a gun waved in my face by them but trespassing is what matters?”

Video footage captured the confrontation as 300 demonstrators marched in the street, claiming they were headed toward the home of St. Louis Mayor Lyda Krewson. The McCloskeys aimed their weapons at the marchers and have since been charged with felony unlawful use of a weapon.

Missouri Gov. Mike Parson, a Republican, has said he will almost certainly pardon the McCloskeys if they are convicted.

The incident landed the couple an appearance during the first night of the Republican National Convention last month, where they asserted their Second Amendment right to defend themselves.

“The radicals are not content just marching in the streets,” Mark McCloskey said during a virtual speech. “They want to walk the halls of Congress. They want power. This is Joe Biden’s party. These are the people who will be in charge.”