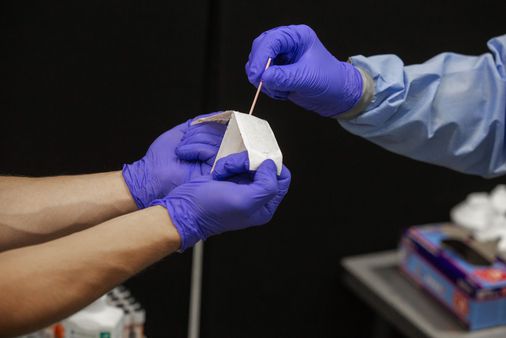 The Department of Public Health has suspended COVID-19 testing at Orig3n, a Boston laboratory, after a state investigation revealed that at least 383 samples the lab found to be positive for the virus were actually negative.

Since April, Orig3n has worked with approximately 60 nursing homes in Massachusetts to screen for the coronavirus. But a state investigation launched in August found that poor management, lack of proper testing materials, and failure to meet systems requirements including properly documenting sanitization “put patients at immediate risk of harm,” according to a statement by a DPH spokesman.

“In early August, the Massachusetts Department of Public Health became aware of an unusually high positivity rate of tests that were reported by the COVID-19 testing laboratory, Orig3n, and opened an investigation,” the statement said. “The Boston lab is required to respond with a written plan of correction, and if action is not taken it can face sanctions.”

Orig3n halted its Massachusetts COVID-19 testing on Aug. 8, shortly after DPH opened its investigation. The state handed down the official suspension on Friday, Sept. 4, and gave the company until Sept. 14 to show it has addressed all deficiencies in its process.

Massachusetts officials first became concerned about the Orig3n’s practices in early August, when a higher-than-average percentage of tests processed at that lab were reported positive. When DPH sent some of those supposedly positive samples to other labs for verification, 383 tested negative, meaning the original results were incorrect.

The true scale of Orig3n’s testing failures remains unknown — as does its impact on Massachusetts’ overall COVID-19 tracking efforts. State officials did not retest every sample Orig3n processed, meaning the total number of false positives could be higher. Officials also did not specify how many tests the lab has conducted in Massachusetts, though a statement released Tuesday by chief executive Robin Smith claimed Orig3n has processed “tens of thousands” of COVID-19 tests over the past 90 days for clients across the country.

“[A false positive] certainly would have caused anxiety and stress for that individual and friends and family members who had been in contact with them,” said Dr. David Hamer, an infectious disease expert at Boston University School of Public Health and physician at Boston Medical Center. False positives can also waste valuable hospital and public health resources, he said, with misdiagnosed patients potentially being quarantined, treated, and retested and their contacts being tracked and asked to self-isolate.

“It’s really hard to put a number on” how common false positives are for molecular COVID-19 tests, Hamer explained, but he said they are rare. “There were likely some lab deficiencies [at Orig3n],” Hamer said.

The state’s investigation revealed underlying problems that may have led to incorrect results at Orig3n. Lab leadership failed to provide adequate management and oversight. A key control material used to double-check the testing process was missing. Records of corrected reports and documentation of lab and testing equipment sanitization were also insufficient.

“We understand the critical importance of speed and precision in COVID-19 testing, and we’re committed to providing accurate, timely results for our clients,” Smith said in a statement provided to The Boston Globe. He said that clients who received false positives were notified of new test results and that the lab immediately created a protocol to prevent further mistakes. “We’re currently working with the state of MA to finalize steps that will enable us to resume testing in our Boston lab,” Smith said.

This is not the first time Orig3n’s testing practices and integrity have been called into question.

According to company documents, Orig3n conducted more than 300,000 genomic tests in 2019. It is federally certified by the US Centers for Medicare and Medicaid Services’ Clinical Laboratory Improvement Amendments. In April, it received emergency use authorization from the Food and Drug Administration to distribute and process molecular COVID-19 tests. The Orig3n tests, like most diagnostic COVID-19 tests, work by detecting signs of SARS-CoV-2, the coronavirus that causes the disease.

In addition to working with Massachusetts nursing homes, the company markets its testing services to colleges and universities, schools, and employers. It has also partnered with the North Carolina Department of Health and Human Services as one of several labs supporting the state’s free testing program for high-risk communities. Since all Orig3n tests are processed in its Boston lab, the DPH suspension will halt its COVID-19 testing nationwide.