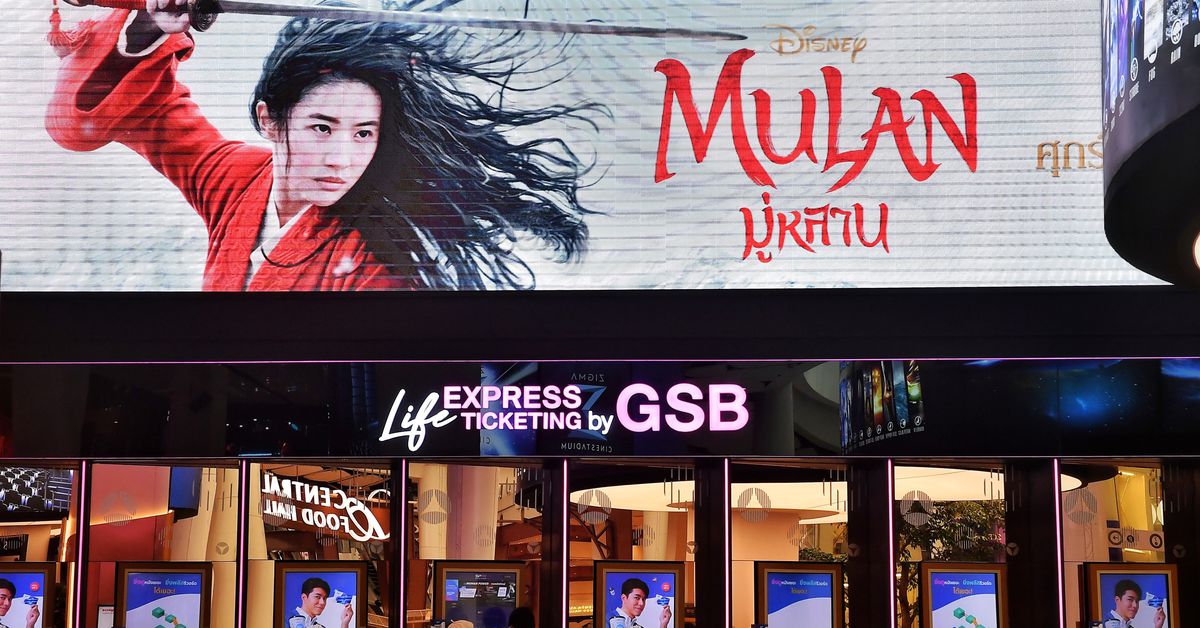 Disney’s new live-action film Mulan has become a global sensation, but not just for the reason the storied production company hoped.

Some viewers who paid to stream the movie on Disney+ last weekend found something troubling in the credits: Disney thanked eight government bodies in Xinjiang, a western province in China where around 2 million Uighur Muslims have been forced into concentration camps by the Chinese government. It turns out parts of Mulan were filmed in Xinjiang two years ago, well after the world knew about Beijing’s plan to “reeducate” Uighurs with Communist Party doctrine.

That’s simply shocking, as there’s no excuse for Disney executives to have been unaware of the human rights abuses taking place just miles from the filming sites. Plus, the film had courted controversy for some time, as its lead actress last year supported Hong Kong’s law enforcement over pro-democracy protesters, launching the #BoycottMulan social media movement.

For several years now, China has been systematically repressing its Uighur Muslim minority in that region — subjecting men, women, and children to torture, sexual abuse, forced sterilization, family separation, and brainwashing, among other horrors. They add to the Chinese government’s other abuses, such as banning expressions of Islamic faith.

Even worse, the film credits specifically praise the police security bureau in Turpan, a city in eastern Xinjiang with a large Uighur population. That bureau is tasked with running some of the internment camps, experts say, and was blacklisted last year along with other Chinese law enforcement agencies by the US Commerce Department, prohibiting US companies from selling or supplying products to them.

It’s unclear if Disney and Turpan’s police bureau or other similar agencies interacted much or at all during filming, but it’s still not a good look.

A spokesperson for China’s foreign ministry this week insisted the camps are simply “vocational skills education and training centers,” even though ample evidence suggests that isn’t true. Disney didn’t respond to a request for comment.

You know, the place where the cultural genocide is happening.

They filmed extensively in Xinjiang, which the subtitles call “Northwest China”#BoycottMulan pic.twitter.com/mba3oMYDvV

Some who’ve seen the film say it also promotes Han supremacism (or “Han chauvinism,” as Mao Zedong termed it), the idea that all parts of China — including native Uighur and Kazakh lands, among others — should be governed and dominated by ethnic Han Chinese, the majority ethnic group in China. Many leaders in the ruling Communist Party, like autocratic President Xi Jinping, are Han.

The villain in the new Disney film leads a group of assassins clearly coded as Muslims, said Darren Byler, an anthropologist at the University of Colorado Boulder who studies Chinese oppression of Uighurs. For instance, the characters are dark-skinned, wear turbans, and are dressed eerily like ISIS terrorists in their videos, some experts say.

The film “traffics in Islamophobia,” Byler argues, and presents Mulan, the protagonist, as “a defender of the Chinese colonization of northwest China.” He added: “It was as if Xinjiang was simply a blank canvas, a land without an indigenous history.”

Human rights activists and many regional experts are angry at all of this, with some using the hashtag #BoycottMulan to build a social media campaign around awareness about the film.

“In Hollywood movies, they claim to embrace social justice. In fact, they kowtow to autocratic China disgracefully,” Nathan Law, an activist pushing for a more democratic Hong Kong, tweeted on Monday. “They shamed themselves by upholding values they don’t even believe in. Movies, should be more than money.”

Law has another reason to be upset about the film. Last year, Liu Yifei — the Chinese-born American actress who plays Mulan in the movie — came out in support of law enforcement officials in Hong Kong who were cracking down on pro-democracy demonstrators. “I support the Hong Kong police. You can all attack me now. What a shame for Hong Kong,” she wrote in August 2019 on Weibo, a Chinese social media site. Her statement prompted the initial calls to boycott the film.

It’s unclear if the social media campaign will doom the film’s success, which cost $200 million to make. It’s reeled in upward of $6 million so far and will likely make much more when it premieres in China on Friday. Still, #BoycottMulan has shown that the Chinese government’s human rights violations will no longer be ignored — and even companies as powerful as Disney may need to change how they engage with China going forward.

“There is clearly a cost now to companies who remain intentionally ignorant of what’s going on in China,” said James Millward, a Georgetown University world history professor.

Some major companies now find themselves enveloped in a firestorm, Millward said, whenever it becomes clear that they haven’t pushed back on Beijing for its mistreatment of the Uighurs.

In 2018, for instance, the consulting company McKinsey held a retreat in Kashgar, China — just four miles from a Uighur internment camp. The New York Times reported on that event, calling out the famous firm:

At a time when democracies and their basic values are increasingly under attack, the iconic American company has helped raise the stature of authoritarian and corrupt governments across the globe, sometimes in ways that counter American interests.

Last year, Japanese clothing companies Muji and Uniqlo promoted their use of Xinjiang cotton. “Made of organic cotton delicately and wholly handpicked in Xinjiang, the men’s Oxford Shirts of MUJI are soft and breathable with a clean design,” Muji’s website read. Uniqlo’s site also at the time boasted its clothes were “Made from Xinjiang Cotton, famous for its superb quality.”

Now, says Georgetown’s Millward, “we can put Disney in an elite section of companies caught in this firestorm.”

Instead of promoting anti-Uighur, pro-Chinese government narratives, companies like Disney could use their clout to pressure leaders in Beijing to end what Joe Biden’s presidential campaign calls a “genocide.”

For a company like Disney, that could mean not filming in the country anymore, delaying releases for their viewers, or — at the most extreme level — completely cut off any ties to the country. But any one of those options, from the smallest to the nuclear one, are hard for any corporation to take, mainly because China is such a large and lucrative market. And if companies do anything to anger Beijing, like not promote a government-friendly narrative in a movie about China, there’s a chance Disney would lose access to that market.

“They are caught between a rock and a hard place,” Millward said.

And yet, human rights groups have urged other major brands to cut ties with suppliers in Xinjiang. As Vox’s Terry Nguyen reported, “In March, the nonpartisan think tank Australian Strategic Policy Institute published a report detailing how 82 foreign and Chinese companies have direct or indirect ties to the Xinjiang region and beyond based on their supply chain.” Among those companies: Amazon, Apple, Dell, Nike, Nintendo, Uniqlo, Victoria’s Secret, and Zara.

Companies could also leverage the upcoming Beijing Winter Olympics in 2022. That kind of event provides a big boost to a nation’s image — just like the 2008 games in China’s capital did. Corporate sponsorships of the events provide even more international legitimacy. A company may see paying to have its logo featured at the games as just an endorsement of the competition, but others will see it also as an endorsement of the host country.

A lack of corporate sponsors would also mean a lack of funds, and a large public outcry could in theory force the Olympic Committee to pick a new country to host the games. That’s a long shot, experts told me, but those who want China to stop interning Uighurs and other minorities should take advantage of the high-profile event to put Beijing on notice.

For now, though, big movie companies might do better to avoid filming in Xinjiang and not help the Chinese government paper over human rights atrocities.

Help keep Vox free for all

Millions turn to Vox each month to understand what’s happening in the news, from the coronavirus crisis to a racial reckoning to what is, quite possibly, the most consequential presidential election of our lifetimes. Our mission has never been more vital than it is in this moment: to empower you through understanding. But our distinctive brand of explanatory journalism takes resources — particularly during a pandemic and an economic downturn. Even when the economy and the news advertising market recovers, your support will be a critical part of sustaining our resource-intensive work, and helping everyone make sense of an increasingly chaotic world. Contribute today from as little as $3.