Given that they’re self-professed foodies with issues regarding portion control, it’s little wonder the devil was on their backs during filming of the Hairy Bikers’ latest TV adventure.

‘It was temptation everywhere,’ recalls Si King. ‘Once you start eating chocolate, it’s quite difficult to stop.’

Especially if you’re surrounded by quality stuff, as Si and Dave Myers were while filming The Hairy Bikers’ Chocolate Challenge, which started on Channel 5 last week.

A departure from their usual fare, it’s taken them off the road and into the heart of Nestlé’s factories to oversee passionate amateur chocolatiers battling it out to create and brand their own bar. 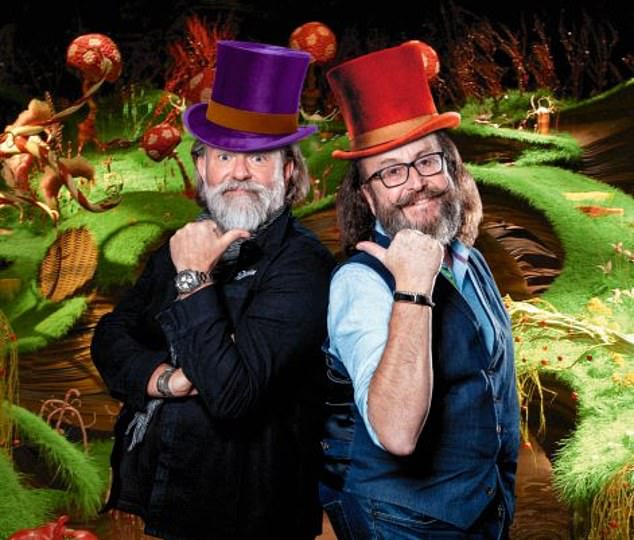 Each week the contestants – among them a stay-at-home mum, a personal trainer and a train steward – face a new challenge and present their creations to expert judges, with the poorest-performing leaving the competition.

The first task last week saw them create a milk chocolate-based sculpture to represent their hometowns and teacher Saqib was the first to come a cropper.

But on the table for the winner is a unique prize – the chance to design their take on the best-selling Kit-Kat which will then be rolled out nationwide.

The series, which also involves marketing exercises, mixes a touch of Bake Off with The Apprentice, although Si and Dave say that’s where the comparisons end.

‘Enthusiastic amateurs are getting together to bring a bit of “ooh and aah” for all the UK’s many chocoholics. It’s got a lovely sense of warmth.’

Still, you may argue taking part in a chocolate-fest is odd for a duo who have drastically downsized after health scares.

In 2014 Si, 53, suffered a life-threatening brain aneurysm and had risky surgery, while in 2009 Dave, 62, was told that he was ‘pre-diabetic’, meaning his blood sugar levels were too high and he was at risk of developing type 2 diabetes.

He began seriously dieting in 2012 and has lost more than 3st, reversing his condition. 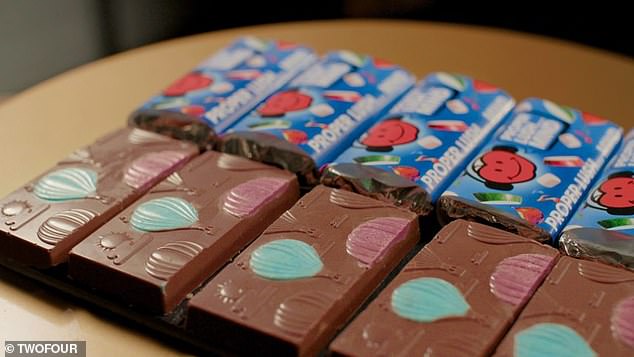 The Hairy Bikers’ Chocolate Challenge follows contestant each week as they compete for the opportunity of designing a Kit-Kat that will be sold nationwide. Pictured: creation on the show

‘I’m half a stone less than when I finished the diet in 2012,’ Dave confides now.

‘I’ll be strict if I get on the scales and feel things have got out of hand – which they did last year when we rode Route 66 in the US over eight weeks.

‘Both Si and I were wolfing carbs, and by the time we got to Los Angeles from Chicago it was a case of, “Muffin top ahoy!”’

‘You’d have to be a Buddhist monk not to put on a few pounds in that situation,’ says Si. So both worked hard on set to beat temptation.

‘We’d slap each other’s hands if we went for another chocolate,’ Si adds. ‘It was a case of, “That’s enough man.”’

Temptation also loomed away from the cameras.

One of the judges is Ruth Hinks, a master chocolatier and founder of the prestige label Cocoa Black – ‘the font of all chocolate knowledge’ as Si puts it. 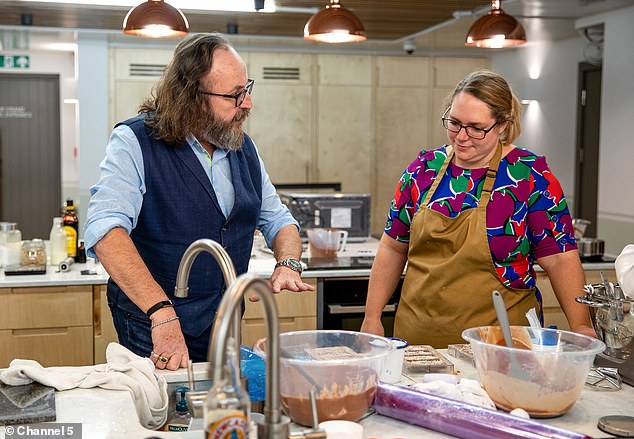 ‘Ruth gave me some of her own chocolates, and I later had to give them to the hotel concierge. If some of the finest chocolates in the UK are in your room saying, “Eat me!”, it’s tough.’

However, Si and Dave admit overseeing the challenges was a learning curve.

‘Chocolate is very hard to work with – and make no mistake, it is an art form,’ says Si.

‘It’s mad what you can put in chocolate now,’ he says. ‘One of the maddest had pear and Stilton inside.’

Still, it surely won’t be long before the bikers are back on the road.

‘I thought I’d be retired by now, but we’re ticking along nicely,’ laughs Dave.

The Hairy Bikers’ Chocolate Challenge is on Wednesdays at 9pm on Channel 5.