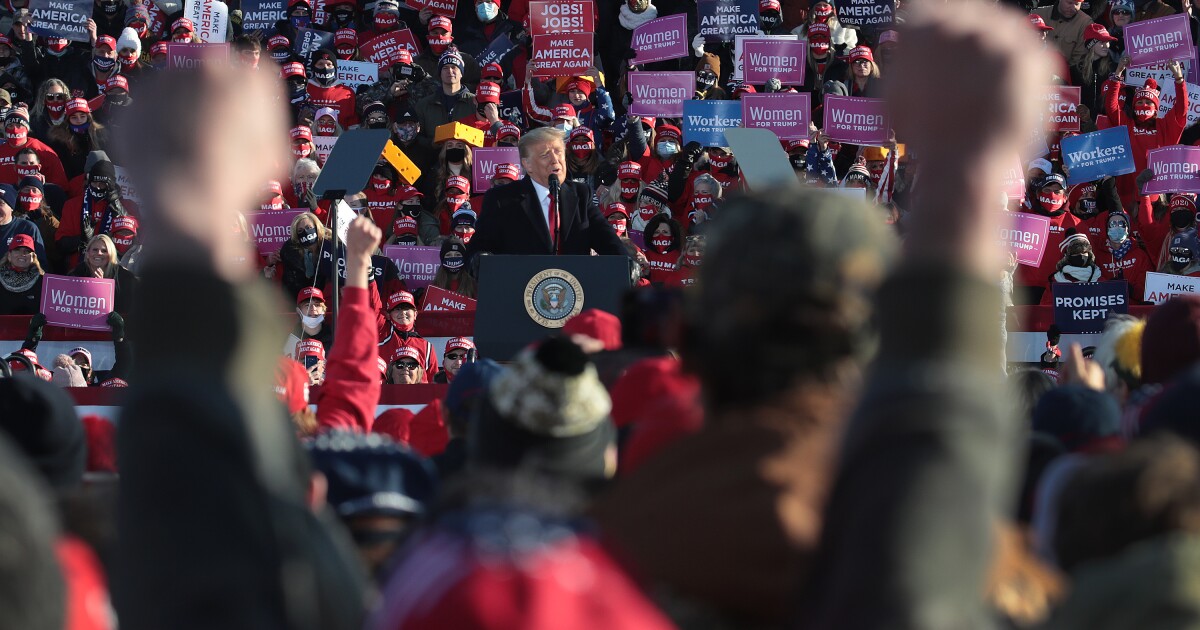 President Trump has described his campaign rallies as “fun,” “wonderful,” “the Greatest Show on Earth,” and, of course, “BIG.”

An effort to calculate whether those events have increased the spread of the coronavirus in the United States suggests that “contagious” and “deadly” would also apply.

A rigorous attempt to gauge the after-effects of 18 of the president’s reelection rallies, all held in the midst of the COVID-19 pandemic, suggests they have led to more than 30,000 additional cases and at least 700 additional deaths.

Those casualties would not have occurred if the campaign events had not taken place, according to a team of Stanford researchers. Media coverage of the rallies made clear there was little effort to follow guidelines about social distancing, and mask use was optional for attendees, who typically numbered in the thousands. (Indeed, face coverings were disparaged by the president on several occasions.)

Furthermore, the extra illnesses and deaths almost certainly reached beyond the ardent Trump supporters who attended the rallies, rippling outward to ensnare others in their towns and cities, the study authors said.

“The communities in which Trump rallies took place paid a high price in terms of disease and death,” the Stanford team concluded.

The study, led by economist B. Douglas Bernheim, was posted Friday on a website where social science researchers share preliminary work and seek feedback from other scholars.

Biden spokesman Andrew Gates said the study supports Democrats’ long-standing charge that Trump’s gatherings have been “super-spreader rallies that only serve his own ego.”

The Trump campaign contends that attendees are exercising their 1st Amendment rights. They are required to submit to temperature checks and are given masks and hand sanitizer upon entering, according to campaign spokeswoman Courtney Parella.

In a bid to determine whether the Trump assemblies really have served as super-spreading events, Bernheim and his colleagues focused on 18 rallies held between June 20 and Sept. 22. Three of those events were held indoors, further increasing the risk of coronavirus transmission.

In an interview, Bernheim made clear that patterns of coronavirus infection vary widely from county to county. But after using an array of statistical methods to make apples-to-apples comparisons, he said the pattern was impossible to ignore: The mass gatherings likely set off chains of transmission that were long and random.

The researchers traced the effects of those chains for up to 10 weeks following each event. During that time, an infected rallygoer might pass the virus to her grocer, who may pass it to his teenaged son, who transmits it to his girlfriend, who could infect her piano teacher.

Roughly 1 out of every 150 such cases results in a death, current COVID-19 statistics suggest.

For their study, the Stanford economists used a technique called “predictive modeling.” Essentially, they sought to distinguish the effects of the presidential rallies from the normal progression of the coronavirus outbreak by examining the trajectories of COVID-19 cases and deaths in counties that hosted Trump events and comparing them with myriad similar counties that were not visited by the president.

The researchers put those non-Trump-hosting counties to work to refine their estimates of rally effects. First, for each of the 18 counties that had hosted a Trump rally, they looked for 100 other counties that had had similar trajectories of COVID-19 cases in the weeks leading up to the rally date. A second scrub of the data compared each rally-holding county to 200 comparable counties.

After the date of the rally, the growth in coronavirus infections in counties that had welcomed Trump diverged notably from the growth in counties that didn’t, the researchers found. The gaps varied widely from rally to rally. But no reading of the statistical findings support the conclusion that hosting a rally had no effect in driving up COVID-19 cases.

Two rallies in Wisconsin — one in Oshkosh on Aug. 17 and another in Mosinee on Sept. 17 — stood out in particular relief. Before each rally, the positivity rate of coronavirus tests in each county was essentially flat. But immediately after the rallies, the “positivity rates rose sharply and quickly” and continued rising for at least several weeks, the researchers reported.

But lots of factors might have explained such differences. Maybe the counties that experienced an increase in cases — that is, the ones that hosted rallies — simply had more people living in closer proximity to one another, helping the virus to spread. Residents might have had higher rates of underlying medical conditions that made them more susceptible to the virus if exposed. Perhaps public health strictures, such as mask mandates or temporary closures of bars and restaurants, were more lax.

The researchers applied statistical techniques to account for possibilities like these. They even made sure that comparison counties in this second exercise matched the Trump-hosting counties in their propensity to vote for Trump in 2016.

This step tempered the hike in cases in the counties that hosted Trump rallies. But they were still unmistakable. Over a period of up to 10 weeks following a rally, the counties that were visited by the president saw an average of 261 more infections per 100,000 residents than did comparable counties Trump didn’t visit.

Finally, the researchers sought to rule out a factor often cited by Trump for driving COVID-19 numbers to worrisome heights. Was it possible that Trump-hosting counties were simply testing more aggressively, thereby picking up more cases?

To find out, the researchers returned to the two Wisconsin rallies that appear to have touched off the most dramatic rise in coronavirus transmission. In both cases, the hike in the positivity rate was strongly evident well before testing was stepped up.

In Marathon County, home to Mosinee, the positivity rate started climbing immediately after the Sept. 17 rally and continued to climb sharply for several weeks. Only then did testing rates rise.

In Winnebago County, home to Oshkosh, positivity rates roughly doubled over the first four weeks following the Aug. 17 rally, then continued to climb sharply. Not until several weeks after that spike did testing increase there.

In addition to a contentious presidential campaign, the pandemic has coincided with a wave of Black Lives Matter protests that also had the potential to fuel viral spread. But Bernheim defended his decision to examine the impact of Trump rallies.

Protests in response to police killings of Black Americans have been spontaneous, geographically dispersed and hard to reconstruct, he said. By contrast, “the president’s rallies were geographically isolated and temporally isolated. There was a very good record of where they occurred.”

For a researcher keen to examine rigorously the effects of mass gatherings in the midst of pandemic, the rallies offered a “very clean” set of natural experiments to assess, he said.

Bernheim also denied partisan motives in the timing of his study, which he said was “dictated by data availability.”

“I’m a scientist,” said Bernheim. “I reason from data to conclusions. In the political sphere, I realize that people reason from conclusions to data. I can’t control that.”