A woman who claims she was shot in the breast by a right-wing protester wielding a paintball gun on the streets of Portland is now suing him for $250,000.

Meg McLain filed suit against Alan Swinney, who identifies himself as a member of the far-right Proud Boys group, on Tuesday – saying he deliberately shot her during demonstrations in the city on August 22.

McLain, who says she was a curious bystander amid violence between right and left-wing demonstrators, is claiming a quarter of a million dollars for ‘pain, discomfort, distress, and interference with daily life.’ 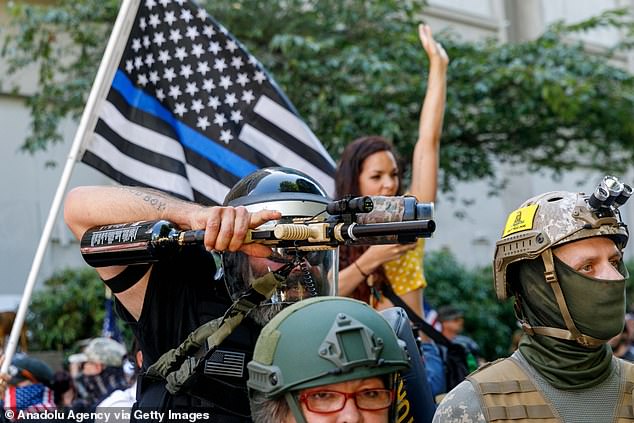 Alan Swinney, a self-declared member of the far-right Proud Boys and a vocal Trump supporter, is being sued for $250,000 after firing paintballs at protesters in Portland 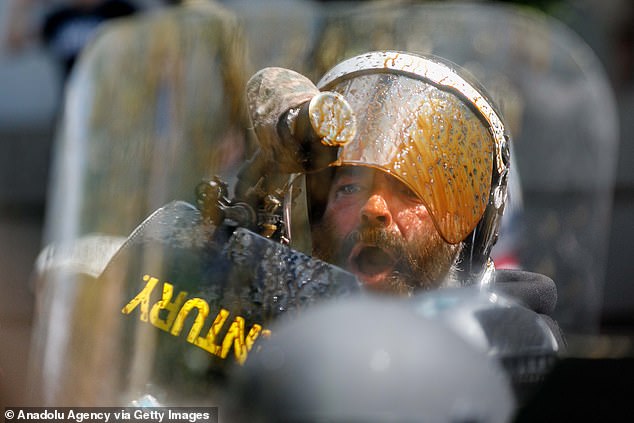 The lawsuit described Swinney as ‘an irresponsible gun owner who travels to Oregon to organize.. purposefully violent rallies and events’.

It also includes a social media post from Swinney in which he appears to admit shooting members of the crowd, while claiming self-defense.

Multiple photographs and videos taken on the day in question show Swinney firing the paintball gun into the crowd, and being hit by paint in return.

At one point he also drew a handgun and pointed it into the crowd, but did not fire.

Michael Fuller, the attorney representing McLain, said the shooting was reported to police at the time, but they refused to arrest or issue a citation to Swinney. 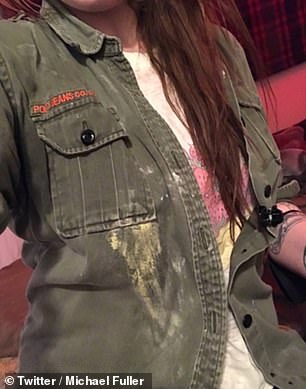 Meg McLain claims she was shot in the right breast while observing events, and is now suing Swinney for ‘pain and distress’

‘It’s just one of the many cases where police are seemingly showing favoritism to Trump supporters,’ Fuller told The Oregonian.

Prosecutors are investigating the violence in Portland on August 22, but so far no charges have been filed against Swinney.

Around 300 pro-Trump demonstrators had gathered in the city that day for a rally, following weeks of marches by left-wing BLM and Antifa groups.

As the two sides faced off, paintballs began flying while clouds of mace filled the air.

Police largely stood by as the violence escalated, with police chief Chuck Lovell saying later that he was worried intervening would escalate things further.

Portland has been gripped by weeks of near-continuous protests that began in the wake of George Floyd’s death and have now been ongoing for 96 days.

The violence ratcheted up at the weekend with the fatal shooting of Aaron ‘Jay’ Bishop, a member of the pro-Trump Patriot Prayer group, in the city. 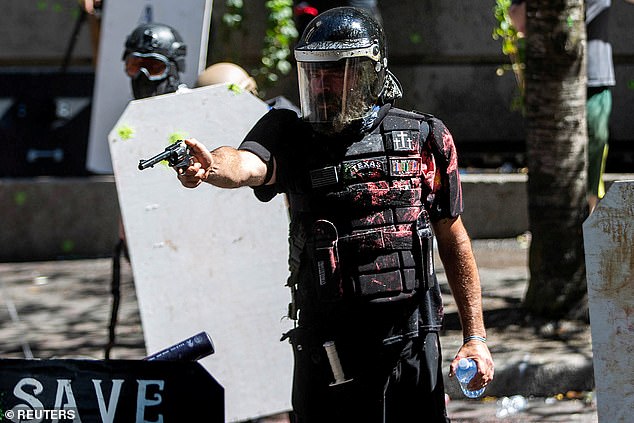 The lawsuit also brands Swinney an ‘irresponsible gun owner’ after he was pictured pointing a handgun at protesters, though did not open fire 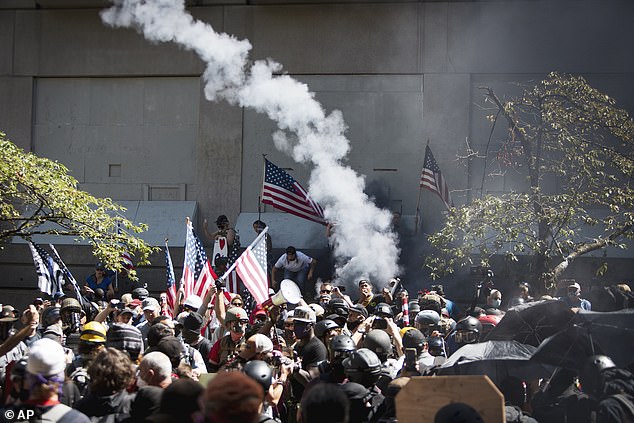 Swinney was involved in clashes between protesters and counter-protesters in Portland on August 22, with police criticized for not intervening in the clashes 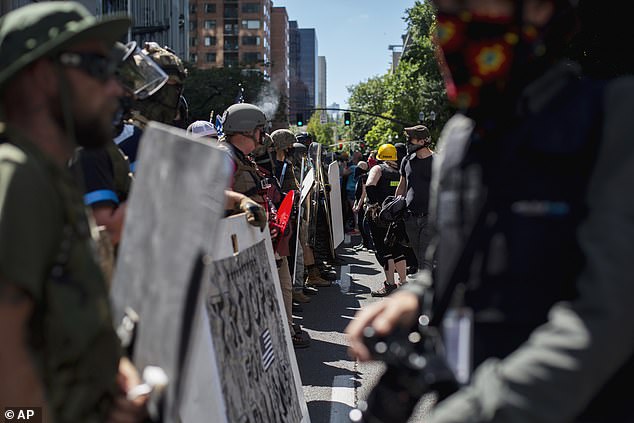 Portland has been gripped by more than three months of demonstrations that began in the wake of George Floyd’s death in May, and have continued since then

Police are thought to have identified Michael Forest Reinoehl, who describes himself online as 100% antifa, as a suspect.

Wheeler announced Monday that he will be moving home after his condo in an upmarket area of the city was repeatedly targeted by protests which have been ongoing for months.

Ted Wheeler sent an email to other people living in the Pearl District block where his two-bed, $840,000 condo is located after activists lit fires outside the building, set off fireworks and blared music to ‘celebrate’ his 58th birthday on Monday night.

Wheeler apologized for ‘the fear that you are experiencing due to my position’ before announcing his move, saying it is ‘best for me and for everyone else’s safety.’