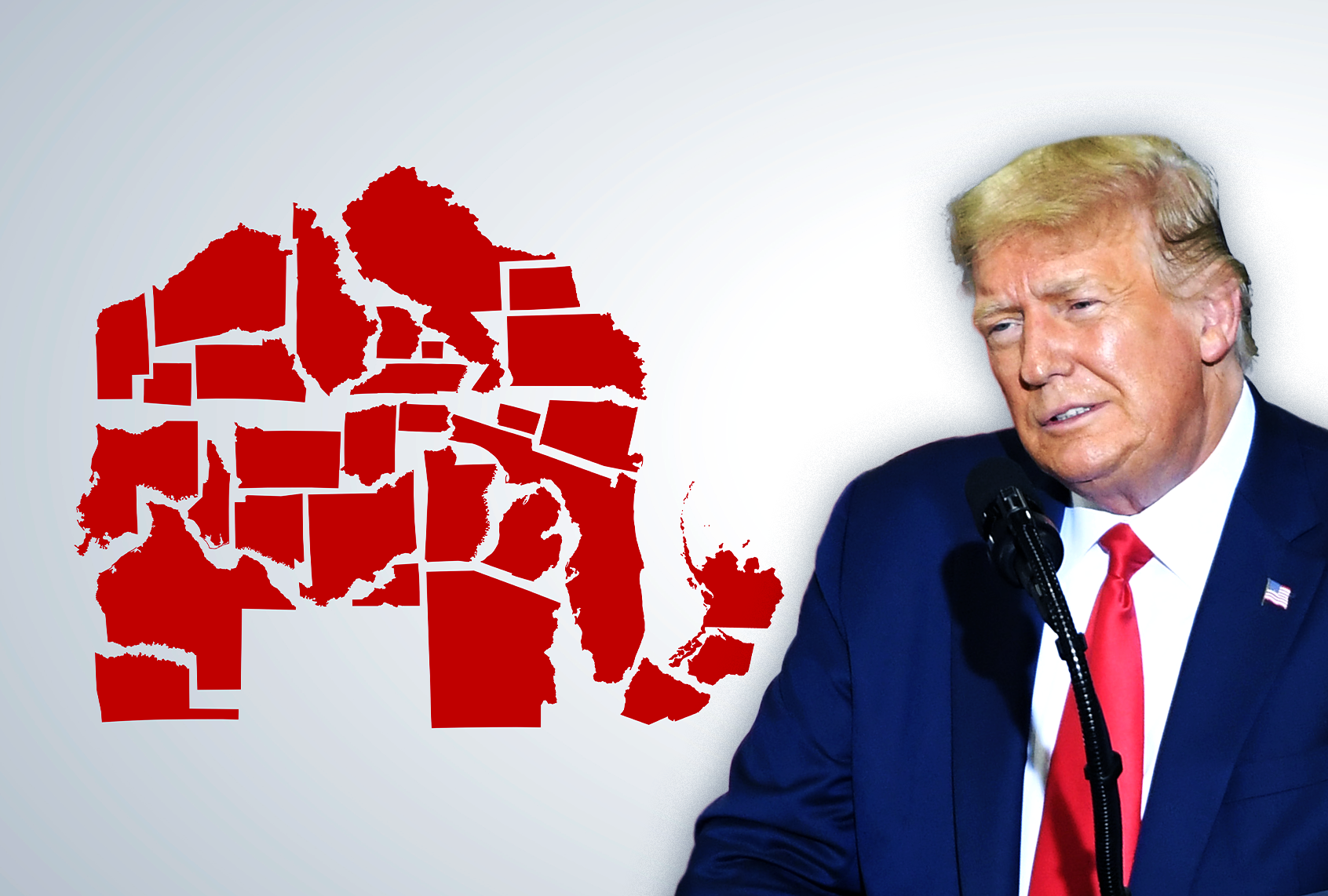 We’ve all heard him say it. On topics ranging from poverty to crime to COVID-19, Trump never hesitates to defer all the blame for whatever onto state and local Democrats rather than acknowledging that he’s supposed to be the president of those cities and states, too.

Earlier this year, for example, Trump tweeted, “The homeless situation in Los Angeles, San Francisco, and many other Democrat Party run cities throughout the Nation is a state and local problem, not a federal problem.” Trump, of course, is the president of those cities, and has been for nearly four years. Has he proposed any national solutions to the homelessness problem? Nope. He’s simply seceding himself from those cities.

On Sept. 3, Trump tweeted, “Governor Andrew Cuomo of New York has the worst record on death and China Virus. 11,000 people alone died in Nursing Homes because of his incompetence!” Trump apparently doesn’t realize he’s the president of New York as well. Bob Woodward, by the way, confirmed that Trump’s much-hyped travel restriction against China prompted tens of thousands of travelers simply to return from China to the U.S., by way of Europe, through New York’s JFK airport, sparking the massive New York infection rate early in the pandemic. Turns out, that was the president’s doing. We’ll circle back to the pandemic presently.

Meanwhile, on Monday morning, Trump tweeted the following whiny lament: “Our people have all left Drudge. He is a confused MESS, has no clue what happened.” Note the use of the phrase “our people.” Trump’s people are, technically, all Americans, but once again he appears to only give a rip about the people who support him.

Over the weekend, Trump visited Las Vegas, where he told reporters, “And by the way, every city that’s in trouble, every state. You look, Democrats, liberal Democrats — they’ve run them into the ground, every city.” Here’s our refrain again: He’s the president of all those cities and states.

Again, Trump clearly blurted that “every state” in trouble is run by “liberal Democrats.” So let’s take a look at which states are, in real life, doing the worst. But first, to be abundantly clear about all this: Issues like education, crime and poverty are always considerably more complicated than the party affiliations of the various mayors, city councils, governors and legislatures that control those places can possibly explain. But since we’re playing Trump’s leadership-cherrypicking game, we’ll play by his rules for the sake of argument.

So these are mostly Trump-Republican states, and if he wants all this on his record, I’m OK with that. After all, he’s rejecting wealthier, better-educated states as “Democrat-run.” It’s also germane to note that among large cities, the two “most dangerous” cities in America per 100,000 residents are Springfield, Missouri and Spokane, Washington — each run by a Republican mayor.

Perhaps Trump’s most egregious abdication of personal and presidential responsibility has been his response to the pandemic. One thing has become shockingly obvious in the last couple of days: Trump was privately aware of the deadly seriousness of COVID-19, calling it deadlier than the most “strenuous flus,” but chose instead to publicly lie about it, telling the nation that COVID was, in fact, just like the flu and that it would go away “like a miracle” when the weather got warmer.

Trump could have borrowed and rebranded, as his own, the paint-by-numbers pandemic instructions left to him by the previous administration. He could have framed the national effort with the same kind of hyper-patriotism we experienced after 9/11. But he refused to take the reins himself. Instead, he walked away, delegating the response to governors and mayors. And now he wants to blame all the bad news on the states and cities, while washing his stubby hands of all responsibility.

Trump and his disciples don’t understand, nor do they care to grasp, that a national crisis requires a national effort in response. For example, the local governments of New York City and Arlington, Virginia, both attacked by al-Qaida on 9/11, didn’t fight the war on terrorism alone. We fought, as we always do, as a nation. When imperial Japan bombed Pearl Harbor, we didn’t send Hawaii to storm the beaches of Iwo Jima. Americans from the entire nation engaged in that war.

By the same token, when a pandemic strikes the entire nation, the entire nation has to respond in unison, otherwise there’s about as much chance of containing the virus piecemeal as there is containing piss in a hot tub. Trump and his loyalists will never understand this basic leadership dynamic.

And he’s not only blaming the states and cities, he’s actively sabotaging them, too, probably so he can blame them for everything that happens as a consequence of the sabotage. Along those lines, on April 13, Trump told Woodward that the virus was “so easily transmissible, you wouldn’t believe it.” Trump elaborated with a story about a meeting in the Oval Office in which someone sneezed, sending everyone, including Trump himself, running for the exits. Again, that was on April 13. Four days later, he tweeted, “LIBERATE MICHIGAN,” deliberately undermining Gov. Gretchen Whitmer’s pandemic response by exploiting the bully pulpit to insist upon reopening the economy, while knowing how transmissible the virus was.

From there, Trump’s loyalists followed his lead, leaving responsible behavior to the rest of us while they gratuitously engaged in pool parties and biker rallies, insisting that caring for others and acting in the national interest was a trespass against their liberty.

The childish, self-indulgent, Q-amplified irresponsibility of 30-40 percent of American voters — including their messiah in the Oval Office — is precisely why we’re still enduring a thousand deaths a day, eight months into this madness, while Canada and other allies have reduced their respective death tolls close to zero.

Why is Trump so afraid to take responsibility himself? The answer is obvious: Because he’s a coward and a shirker, vastly out of his depth, painfully outmatched and fatally incapable of handling a crisis of any magnitude, much less this one. When the going got tough, Brave Sir Donald ran away, stealing credit for the upside while blaming everyone else for the downside. The impact of his ineptitude is worsened, by the way, though his grisly fascination with stirring up chaos all around him, not unlike a malicious tween boy who shakes up an ant farm just to watch the ants freak out. Anyone who buys his “I don’t want to create a panic” nonsense is dumber than he is.

In the end, if Trump only wants to be president of the places that aren’t mean to him, if he doesn’t want to be president of the entire nation, it’s time for him to step aside and allow grownups who aren’t afraid of being responsible leaders — who aren’t afraid of being presidential — to take the wheel. The entire country, including the people who voted for him, will be better off for it.