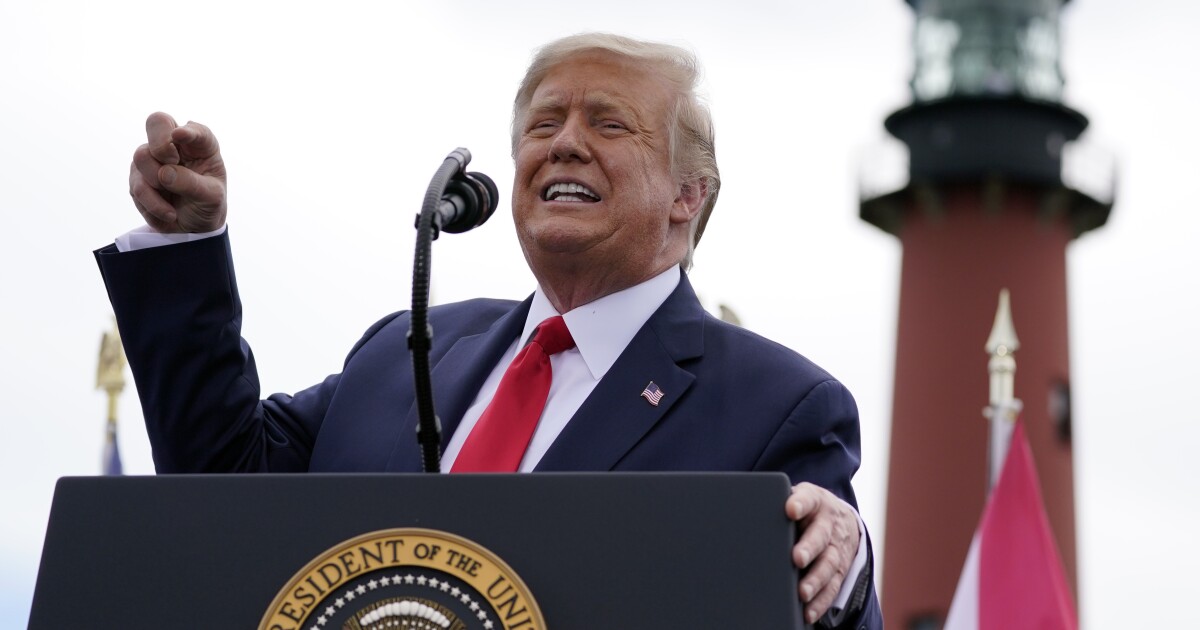 President Trump signed a largely symbolic proclamation Tuesday urging Congress to expand a moratorium on oil and gas drilling off America’s southeastern coastline, touting his controversial environmental record in a state in the crosshairs of climate change and electoral politics.

Since taking office, Trump has shredded dozens of environmental protections, dismissed the scientific consensus on climate change and tapped energy lobbyists to lead the agencies entrusted with safeguarding the country’s natural resources, but he dramatically recast his record in an effort to woo environmentally minded voters.

“Number one since Teddy Roosevelt. Who would have thought? Trump is the great environmentalist,” he said before urging Congress to extend a ban on selling new leases along Florida’s Gulf Coast as well as a moratorium along the state’s Atlantic coast and the shorelines of Georgia and South Carolina.

Only Congress has the power to extend the statutory ban on oil leasing in the eastern Gulf of Mexico, and lawmakers are unlikely to do so in the eight weeks before the November election.

The Trump administration recently considered a plan to open the eastern Gulf of Mexico to drilling when the current moratorium expires in 2022. But that prompted a bipartisan outcry in Florida, including from the two Republican senators, the Republican governor and other state and local officials, and Trump shifted course.

Speaking in front of the Jupiter Inlet Lighthouse, Trump said he had come “to celebrate our incredible record of natural conservation and environmental protection” and asserted that his approach has struck the right balance: “We can create jobs, safeguard the environment and keep energy prices low for our citizens.”

In a 21-minute speech, he bragged about proposing an increase in funding for restoration of the Everglades in next year’s budget, and claimed that Democrats would “badly hurt” the environment — contradicting his own attacks on Democrats for backing an ambitious plan to reduce carbon emissions — and “take away our energy independence.”

The same budget proposal includes cuts to federal agencies responsible for addressing the climate crisis, including slashing the Environmental Protection Agency’s budget by a quarter and its workforce by 11%.

Trump won Florida — with its crucial 29 electoral votes — in 2016, and his campaign is determined to do so again. New polling suggests Trump and Democratic nominee Joe Biden are in effect tied in the state, with each drawing 48%, according to an NBC News/Marist poll of likely Florida voters.

With its 1,350 miles of coastline, Florida is highly vulnerable to changes wrought by global warming. It has been battered by intensifying and more frequent hurricanes as ocean temperatures have risen and is increasingly subject to flooding as sea levels rise.

With his choice of Florida for a backdrop, Trump’s revisionism in terms of his environmental record — not unlike his efforts to recast his slow response to the COVID-19 pandemic as heroic and to take credit for a long-gone economic boom amid the resulting recession — was all the more striking.

Since taking office, the president has called climate change a “hoax.” When he toured devastation left by hurricanes in Florida, Texas and Puerto Rico, Trump routinely described the storms as isolated events, something “never seen” before, and focused on the federal response.

In June 2017, he announced the U.S. was withdrawing from the Paris climate accord, a global agreement to reduce carbon emissions. He has also mocked efforts at greater energy efficiency, riffing frequently at rallies about the supposed perils of lower-wattage light bulbs, low-flow shower heads and wind turbines, suggesting — falsely — that they cause cancer.

In addition, he has taken numerous actions to weaken or do away with environmental protections.

Trump’s EPA, currently run by a former coal industry lobbyist, has weakened limits on greenhouse gas emissions from cars and trucks, as well as from the oil and gas industry.

It has opened more public land to drilling and rolled back wildlife protections. And it has eased pollution regulations on coal-fired power plants in an effort to revive the dying coal industry.

“He’s ignoring science, he’s ignoring experts and now he’s even ignoring his own record,” said Pete Maysmith, a senior vice president for the League of Conservation Voters, a nonprofit group. “Florida is ground zero for climate change with extreme weather and hurricanes in particular. Donald Trump has attempted to roll back over 100 environmental protections, including dozens related to climate change and clean water. He’s an environmental disaster and Florida’s paying the price.”

As the race tightens, Biden continues to outpace Trump among older voters in Florida. But Biden is narrowly losing the large Cuban American and Hispanic vote, accounting for the razor-thin margin of recent state polls.

A survey Tuesday of 500 voters in Miami-Dade County, the state’s largest population hub, showed Biden with a 17-percentage-point lead among voters in the predominantly Hispanic and heavily Democratic county, key to his chances for a statewide victory. That is far below Hillary Clinton’s 30-point edge there four years ago.

A Florida-based advisor to Biden’s super PAC cited private polling showing at least 10% of non-Cuban Hispanic voters in Florida remained undecided. The campaign has launched a $1.2- million television push in an effort to draw them to Biden’s side.

Given the disproportionate impact of environmental disasters on poor, minority communities, the issue of climate change could prove persuasive in winning votes.

Since May, the League of Conservation Voters has spent $14 million targeting swing voters in six critical states with English and Spanish advertising arguing that Trump’s denial of climate change could prove as costly as his initial downplaying of the coronavirus, which has killed nearly 190,000 Americans.

“We found that tying Trump’s repeated denial of scientific warnings about the threat of coronavirus, refusal to listen to scientists’ warnings about climate change, and public comments that both crises were a ‘hoax’ could move Florida swing voters” to support Biden, Maysmith said.

In a statement Tuesday, Biden focused on the pandemic’s impact in Florida, noting the 11,900 deaths and 3.6 million residents who have filed for unemployment benefits since March. He equated Trump’s stubborn flouting of public health experts’ advice with his climate change denialism.

“When it comes to the coronavirus, it’s no surprise that President Trump has refused to listen to the experts and the scientists — just look at his environmental record,” Biden said.