The mum-of-two, 40, followed a recipe by Donna Hay and said she usually cooks lamb cutlets when entertaining guests or to celebrate special moments, as this type of meat cut is quite expensive.

‘Lamb cutlets are a little bit pricey at times, so I look out for when they’re on special,’ Jules posted on Instagram.

Jules said the mouth-watering dish is ‘really simple’ as it involves few steps to complete the ‘melt-in-your-mouth’ meal. 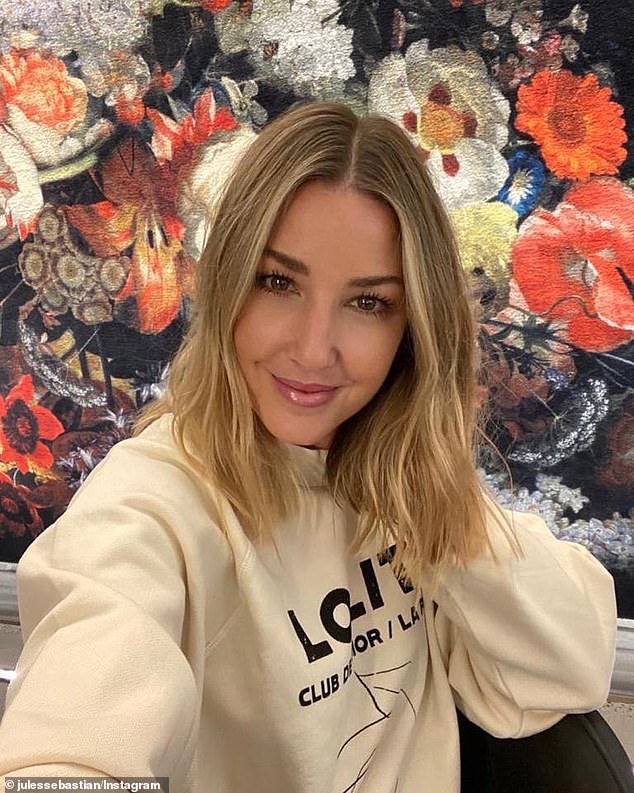 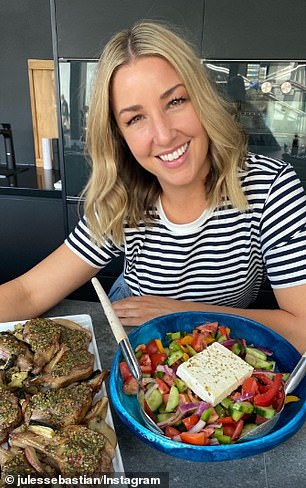 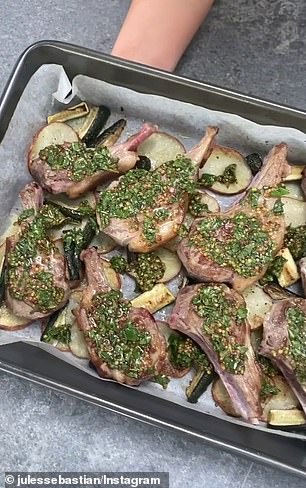 The mum-of-two, 40, followed a recipe by Donna Hay and said she usually cooks lamb cutlets when entertaining or to celebrate special moments as this type of meat cut is quite expensive

To make the ‘fast, simple and easy’ meal, Jules started preparing the marinade for the meat by mixing chopped mint, seeded mustard and a drizzle of honey into a bowl.

‘The hero of this dish is this amazing marinade…it’s like a chunky marinade for the meat and it smells like heaven,’ she said.

After making the quick marinade, she explained how she thinly sliced the red potatoes and zucchini that were placed in a lined baking tray ready for the oven.

‘I’ve thinly chopped up some potatoes, I’ve used red potatoes for some colour but you can use any ones you like,’ she said.

Once placed in the baking tray, she drizzled some olive oil and garlic salt over the top before cooking in the oven for half an hour at 180 degrees Celsius.

While the vegetables were cooking, Jules made the Greek salad by chopping up three different coloured capsicum, cucumber, tomato and onion and placed the pieces in a large bowl.

‘In the bowl I’m going to put some salt and pepper, oregano, balsamic vinegar and olive oil,’ she said.

‘Next up is the Feta cheese – I’m going to do it the traditional way and put a big chunk on top,’ Jules said and placed the cheese in the middle of the salad.’ 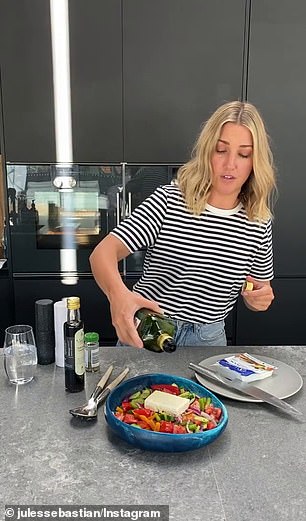 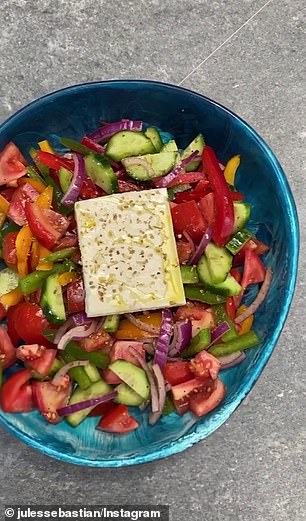 Jules said the mouth-watering dish is ‘really simple’ as it involves few steps to complete the ‘melt-in-your-mouth’ meal. She made the Greek salad by chopping up three different colour capsicums, cucumber, tomato and onion and combining in a large bowl

Next Jules seared the lamb cutlets on the stovetop on a high heat for one minute on each side.

‘Keep your eye on them and make sure you don’t overdo them because lamb [cooks] fast,’ she said.

‘We know it’s ready when we can see the fat bubbling away.’

Jules then placed the meat on top of the potatoes and zucchini and added the marinade dressing before cooking in the oven for a further ten to 15 minutes.

‘The reason why we put it in the oven in the first place is so we can get the potatoes and zucchini nice and soft without overcooking the lamb at the same time,’ she said. 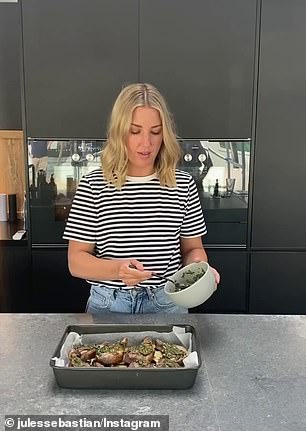 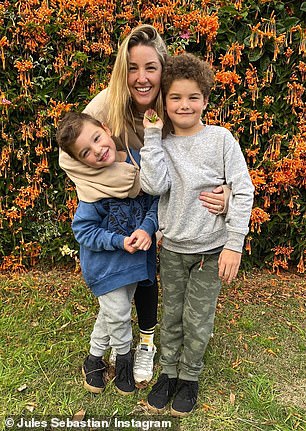 The lamb was cooked ‘to perfection’ and the vegetables tasted sweet and crispy, while the salad provided and added freshness.

‘The vegetables are really soft, it kind of just melts in your mouth, wow that’s good,’ Jules said.

Jules highly recommends others try the dish for themselves at home as it tasted ‘delicious’.

Pre-heat the oven at 180 degrees Celsius

To make the marinade, chop a small bunch of mint and combine with one tablespoon of seeded mustard and a drizzle of honey

Combine until the mixture is ‘wet’ and mixed well

Cook for half an hour in the oven

Prepare the Greek salad by chopping the red onion, capsicums, cucumber and tomato and combine in a bowl

Add olive oil, balsamic vinegar, salt and pepper to the salad before placing the Fetta cheese on top

On a high heat, sear the lamb cutlets for one minute on each side on the stove

Cook in the oven for a further ten minutes