Mike and Dan Friedman were just 11 years old when their father died in the attacks on September 11, but in the days and weeks that followed the brothers handed out care packages to first responders working in the wreckage.

One of the items that rescue workers requested was clean, dry socks – and it was this fact that would later inspire the twins to set up a company selling this exact product.

Tall Order, which was launched three years ago, was set up to honor the twin’s father Andy Friedman and to give back to the organizations that supported the family following his death on 9/11. 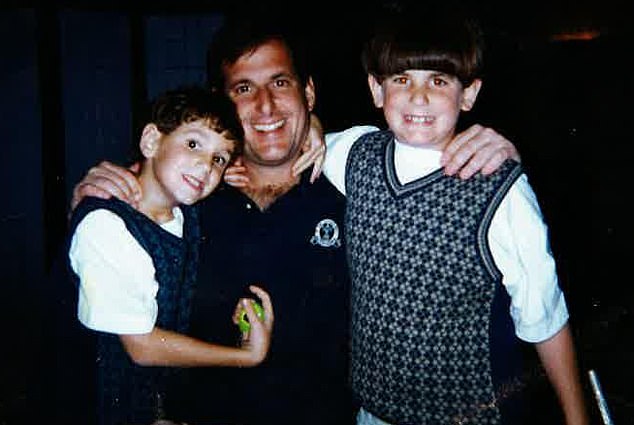 Mike and Dan Friedman were just 11 years old when they lost their father Andrew Friedman in the attacks on the Twin Towers on September 11, 2001 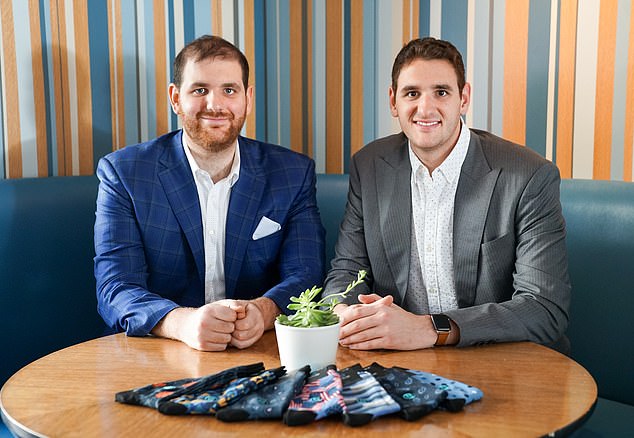 The company has recently released the FealGood sock with 100 per cent of all the proceeds being donated to support first responders who have been injured in the course of their duties or within their everyday lives.

The money will be used by the FealGood Foundation, which was founded by John Feal, one of the rescue workers who was injured at Ground Zero.

It was initially set up to advocate for 9/11 first responders – something it continues to do to this day – but the foundation has since expanded to assist any emergency personnel injured in the course of their everyday duties, including the first responders working on the frontline of the COVID-19 pandemic.

Dan, now 30, told DailyMail.com: ‘After 9/11 we had so many organizations come to our aid that we thought it was a ‘tall order’ to pay them back for everything they did for us. 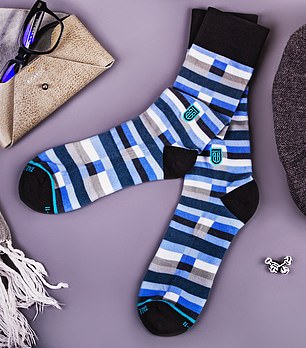 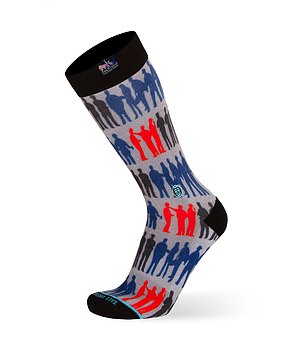 A share of proceeds from the sales of all Tall Order socks go to charitable organizations, and 100 per cent of earnings from the FealGood sock (right) are donated to support first respnders 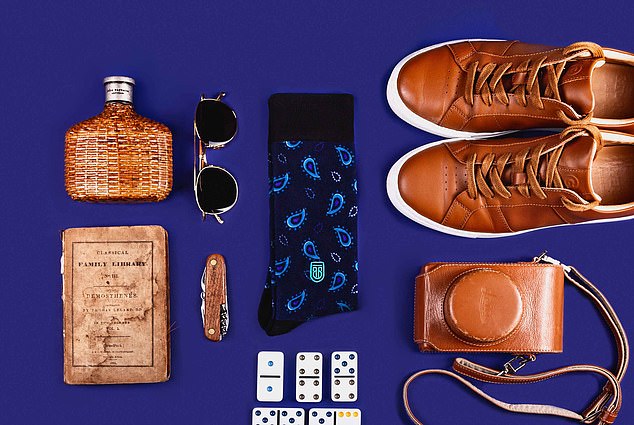 Today Tall Order makes socks for all men, rather than just tall individuals. As well as size 16-20, they also carry sizes 9-11 and 12-15, and socks that can stretch up to 22′ for wider calves

‘So in that spirit we knew when we started our company that we wanted to give back and that was such a big portion of what it was going to be.’

Mike explained that when the company launched in 2017, they family decided to donate a portion of their profits to a non-profit organization called Tuesday’s Children that had supported them in the aftermath of 9/11.

The charity continues to support children and families that have been affected by terrorism, military conflict or mass violence.

The twin’s mother Lisa Friedman Clark said that the ethos of giving back had always been so important to the boys’ father, who died when he was just 44.

She said: ‘Andy was just the kind of guy who made people feel good and he was very philanthropic with his time and money. He was very involved in the community, in our temple, and he coached the boys in all their sports.’ 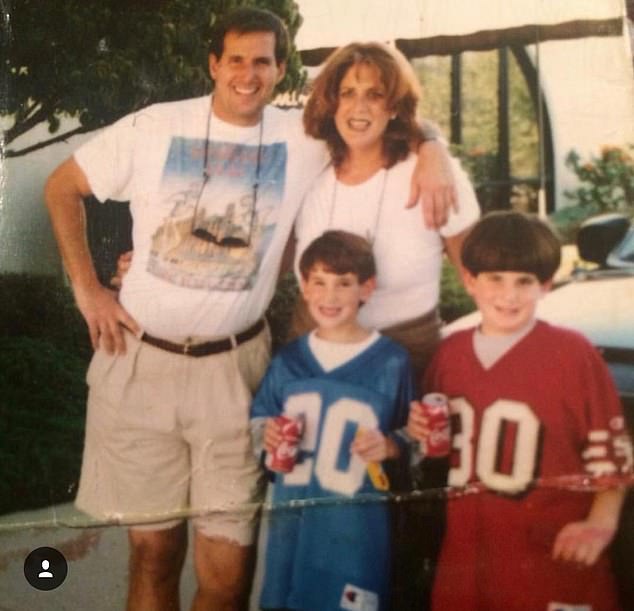 Andrew Friedman with his wife Lisa and their twin sons Mike and Dan. The brothers said their parents instilled the value of giving back in them from a young age

Andrew Friedman was working on the 92nd floor of the North Tower when the planes hit the World Trade Center on the morning of September 11, 2001.

Lisa said: ‘Andy called me after the second plane hit so I spoke to him at about 9.15am and he told me he was ok and had plenty of air.

‘But I knew he wasn’t coming home. If he could have gotten down he would have already. So I said goodbye to him then.’

Mike and Dan had just started their new middle school near where the family lived in Woodbury on Long Island, New York, when they learned of their father’s death.

They spent the following days in Manhattan with their mother looking for information about their father and giving out supplies to rescue workers.

Dan said: ‘Some of the supplies that we gave out were clean and dry socks to the responders. They were requesting them as their feet were getting dirty and wet from going through all the rubble and being on their feet all day. 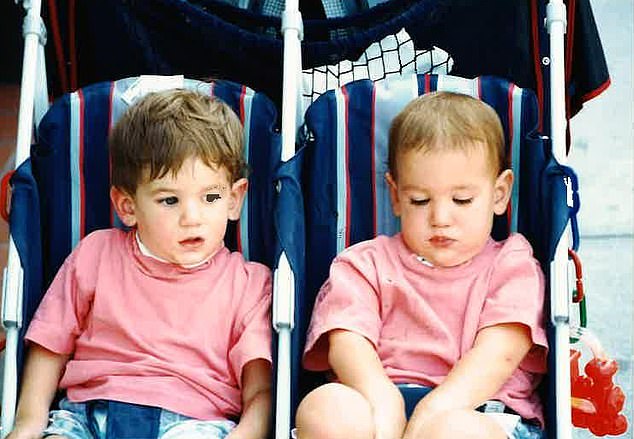 Mike and Dan Friedman as young children. The twins grew up to be 6’11 and 6’9 respectively 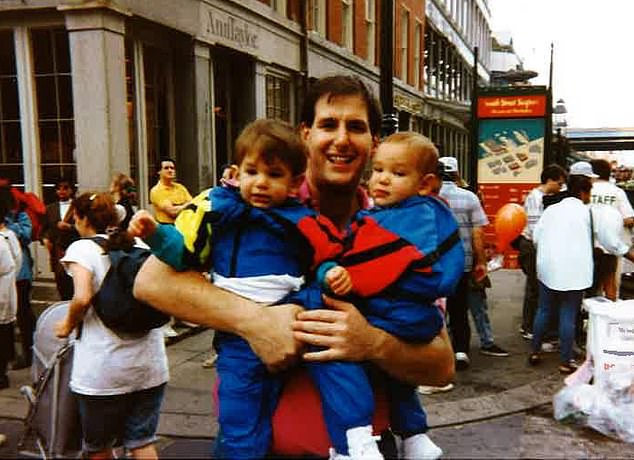 ‘Little did we know at the time that this was going to be the foundation for the business that we were going to start 15 years down the road.’

Mike and Dan were working both working corporate jobs in the city when they decided to set up Tall Order, as they were becoming frustrated at their lack of ability to make an impact.

At the same time, measuring 6’11 and 6’9 respectively and wearing size 16 shoes, they noticed a gap in the market for fun socks that fit larger feet.

Dan explained: ‘At the time, hot funky socks were all the rage in corporate America. That’s how people were personalizing their work outfits, they would come into the office dressed in these really funky socks.

‘But at big and tall stores you just couldn’t find those kinds of socks. You might see a stripe or an argyle every now and then but nothing with the prints and the fun novelty things. 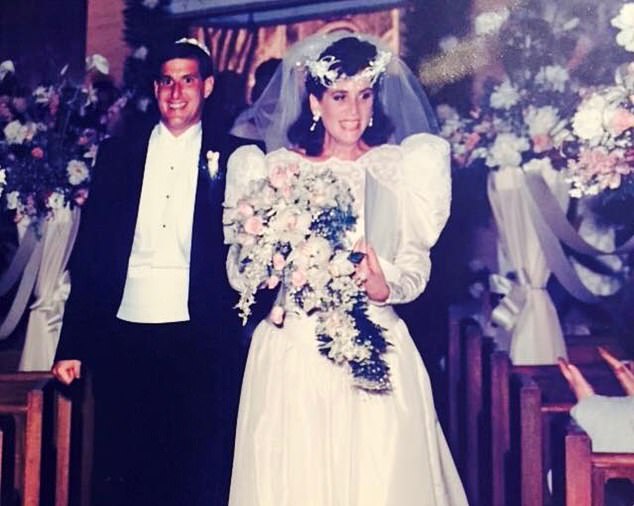 Andy and Lisa on their wedding day. Lisa, who was diagnosed with ovarian cancer when she was 23, explained that Andy supported her throughout her illness 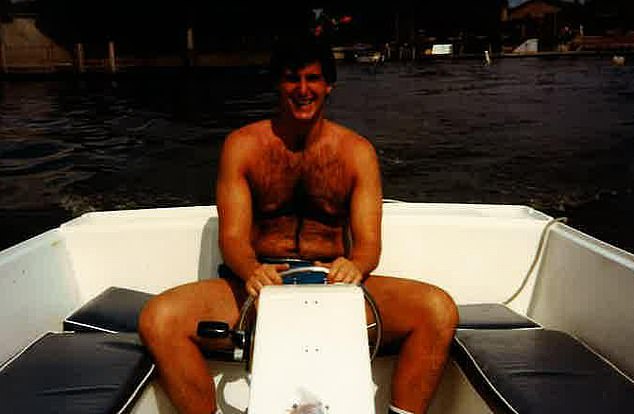 The ethos of giving back had always been important to Andy Friedman. Lisa said: ‘Andy was just the kind of guy who made people feel good and he was very philanthropic’

‘And the socks themselves were really uncomfortable. They would rip, they would tear, and they would fall down during the day.

‘So we knew there had to be a better way to outfit the bigger feet in America, not just from a fashion standpoint but also in terms of comfort and function. To make sure they would fit around the widest calves and the tallest legs.’

The brothers set about engineering socks that would accommodate men up to foot size 20, while also fitting comfortably around wide calves without digging in or slipping down.

Today Tall Order makes socks for all men, rather than just tall individuals. As well as  size 16-20, they also carry sizes 9-11 and 12-15, and socks that can stretch up to 22′ for men with wider calves.

The brothers also have plans to expand into athletic socks that have features like extra cushioning, seamless toes and moisture control, as well as underwear and undershirts.

Mike added: ‘It’s lots of fun but we’re all working hard. We want to be one of the go-to brands for anyone who doesn’t necessarily feel like the regular options fit them.

‘We want to be something that makes you look good and feel good, while knowing you’re also doing good.’