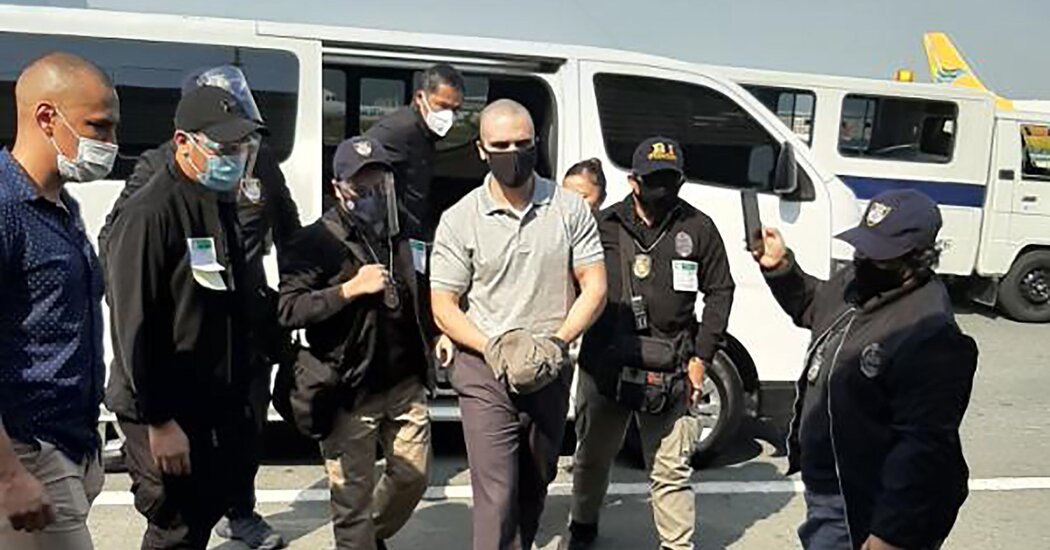 MANILA — A U.S. Marine who received a pardon from President Rodrigo Duterte for the killing of a transgender woman was deported from the Philippines on Sunday.

The Philippine immigration commissioner, Jaime Morente, said on Sunday that Lance Corporal Pemberton was barred from ever returning to the country as a consequence of the deportation order.

The U.S. Embassy in Manila said that Mr. Duterte’s “absolute pardon” of Lance Corporal Pemberton meant there were no legal impediments to his departure.

“All legal proceedings in the case took place under Philippine jurisdiction and law,” the embassy said in a statement. “Lance Corporal Pemberton fulfilled his sentence as ordered by Philippine courts and he departed the Philippines on Sept. 13.”

It was not immediately known where in the United States the plane carrying Lance Corporal Pemberton was heading.

Mr. Duterte’s decision to pardon the Marine had angered gay and transgender rights activists as well as nationalist groups that resent American military involvement in the Philippines, a longtime ally in the Asia-Pacific region and a former U.S. colony. Opponents of the pardon had held peaceful protests asking the president to reconsider.

On Sunday, Lance Corporal Pemberton’s lawyer, Rowena Flores, said her client was “extremely grateful” for the president’s action, which he called an “act of compassion.”

Lance Corporal Pemberton, then 20, was convicted of homicide in 2015 for the killing of Jennifer Laude, 26. He was sentenced to six to 12 years in prison — a term that was later reduced to 10 years.

Rather than serving his sentence in a Philippine prison, Lance Corporal Pemberton was held at Camp Aguinaldo, the Philippine military headquarters outside Manila, in keeping with a Visiting Forces Agreement with the United States. That pact gives the U.S. authorities certain jurisdiction over troops who become involved in criminal cases while on training missions here.

Mr. Duterte threatened to scrap the agreement early this year but reversed his stand in June. His spokesman, Harry Roque, said last week that Mr. Duterte might have granted the pardon to ensure that the Philippines would receive priority consideration for any Covid-19 vaccines being developed by American scientists.

Mr. Roque, who as a lawyer once represented the family of Lance Corporal Pemberton’s victim, criticized a Philippine court’s decision this month to release the Marine less than six years into his sentence. The president’s office initially said it would seek to block the court order before Mr. Duterte announced he was issuing a pardon. On Thursday, Mr. Roque said he respected the president’s decision, which he said was based on the “broader national interest.”

“While I represented the Laude family in the past, if it means that the pardon could result in all Filipinos getting a vaccine if the Americans develop it, I do not have a problem with that,” he said.

On Sunday, Ms. Flores, the lawyer, said that Lance Corporal Pemberton “extends his most sincere sympathy for the pain he caused.”

“He wishes he had the words to express the depth of his sorry and regret,” she added.