Pfizer Inc and BioNTech SE have proposed to the US Food and Drug Administration (FDA) to expand the enrollment of their Phase 3 pivotal COVID-19 vaccine trial to up to about 44,000 participants, the companies said.

The initial target figure for the trial was up to 30,000 participants.

British clinical trials for the AstraZeneca and Oxford University coronavirus vaccine have resumed following confirmation by the Medicines Health Regulatory Authority (MHRA) that it was safe to do so, the company said.

The late-stage trials of the experimental vaccine, one of the most advanced in development, were suspended this week after an illness in a study subject in Britain.

“The standard review process triggered a voluntary pause to vaccination across all global trials to allow review of safety data by independent committees, and international regulators,” AstraZeneca said.

“The UK committee has concluded its investigations and recommended to the MHRA that trials in the UK are safe to resume.”

In some parts of the country, medical oxygen was becoming hard to find. Dr Amit Thadhani, Medical Director of Niramaya Hospitals in Panvel, a suburb of India’s financial capital Mumbai, said the shortage in his area was acute.

“The problem is that the filling stations are themselves not getting supply of oxygen from the manufacturers. Supplies are extremely limited,” Thadhani said.

An official from the Navi Mumbai Municipal Corporation in a neighbouring suburb said they had received reports from multiple hospitals about dwindling oxygen supplies and made requests to state authorities.

Hello, this is Arwa Ibrahim, taking over the coronavirus live updates from my colleague Tamila Varshalomidze.

The entire German national amateur boxing team has been infected with coronavirus at a training camp in Austria.

“Fortunately, there are no serious cases. Some had mild symptoms such as sore throat while others felt nothing,” Mueller said.

As infection numbers surge in the United Kingdom, a leading health expert warned that the country is on the verge of losing control of the outbreak.

The UK recorded more than 3,500 new infections within a day on Friday, the highest level since mid-May.

“I think one would have to say that we’re on the edge of losing control,” Mark Walport of the UKRI, a research institute, told the BBC.

The United Arab Emirates reported 1,007 new cases of the coronavirus, its highest daily number since the pandemic broke out. The country conducted more than 95,000 tests and registered one death and 521 recoveries.

Until last month, there had been a generally falling trend after the UAE’s new daily cases peaked to 994 in May, but numbers have surged from 164 cases on August 3.

Hungary’s daily new coronavirus cases reached a record 916, by far the highest since the onset of the pandemic as schools reopened and strict measures that helped contain the pandemic in the spring have yet to be reinstated.

Even as cases rise, the number of people dying from the disease has remained fairly low, with two elderly patients with chronic pre-existing conditions dying from complications of the coronavirus in the past 24 hours.

The government’s coronavirus task force said active cases reached 7,134, but Prime Minister Viktor Orban, who attended a session of the task force early on Saturday, said schools can stay open and life must go on.

Taiwan will sign up to the COVAX global vaccine allocation plan to ensure it will be able to access a COVID-19 vaccine when one becomes available, the island’s health minister said.

Chen Shih-chung told reporters in Taipei that the government had engaged lawyers to enter discussions about signing onto the scheme. Taiwan is also researching its own vaccine, a process Chen said was going smoothly.

The World Health Organization (WHO) and the GAVI vaccine alliance are leading the COVAX facility, aimed at helping buy and fairly distribute vaccination shots against the novel coronavirus around the world. 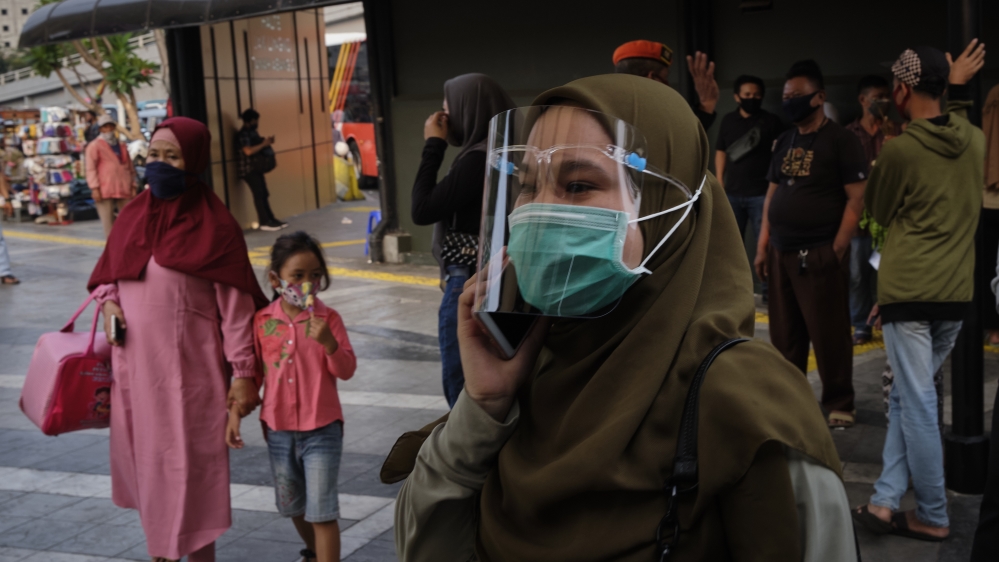 Indonesia has reported 3,806 new coronavirus infections and 106 deaths, data from the health ministry website has shown.

Saturday marked the fifth consecutive day that Indonesia registered daily infections of more than 3,000, bringing the total number of cases to 214,746.

Total COVID-19 deaths rose to 8,650, the highest in Southeast Asia.

In a bulletin, the ministry said total deaths have increased to 4,292, while confirmed cases rose by 4,935 to 257,863. The Philippines has the most COVID-19 infections in the region.

Princess Leonor, the heir to the Spanish throne, has gone into quarantine after a classmate at her school tested positive for COVID-19, the royal household said.

The 14-year-old daughter of King Felipe will be tested for coronavirus like other pupils in her class at the Santa Maria de los Rosales school in Madrid.

The king and Queen Letizia will continue their royal duties for the moment, a spokesman for the royal household said, as Spain struggles to control a surge in coronavirus cases.

The country has seen one of the biggest spikes in cases among European countries in recent weeks.

It tightened restrictions on mask-wearing this week although it aims to avoid bringing back measures that would hurt businesses.

Large crowds rallied in Auckland against the government’s social distancing restrictions imposed on the country’s largest city after an outbreak of the novel coronavirus last month.

Local television footage showed tightly packed crowds, with many people not wearing masks, with estimates of the attendance varying in reports between a thousand and a few thousand people.

“We are all here today because we believe we need to stand up for our rights,” the public Television New Zealand cited Jami-Lee Ross, the leader of the Advance New Zealand party, one of the organisers of the protest, as saying.

Hello, this is Tamila Varshalomidze in Doha, Qatar, taking over the live updates from my colleague Zaheena Rasheed in Male, Maldives.

India reported a record daily jump in coronavirus cases for a second consecutive day, logging 97,570 new infections, according to data from the federal health ministry.

With total cases of more than 4.65 million, India is the world’s second-worst affected country, trailing only the United States, which has more than 6.4 million cases.

But the growth in infections in India is faster than anywhere else in the world, with cases surging through urban and rural areas of some large, populous states.

Deaths related to the novel coronavirus in Australia reached 803, but new daily infections in the country’s largest hotspot of Victoria continued to fall.

Victoria state reported six new deaths related to the coronavirus over the past 24 hours, bringing its total to 716, or more than 90 percent of all deaths in Australia.

However, new cases in the country’s second-most populous state continued to fall from a peak of more than 700 in a single day in early August. It reported 37 new cases on Saturday, its lowest since late June.

The US budget deficit hit an all-time high of $3 trillion for the first 11 months of this budget year, the Treasury Department said, as a result of the government’s massive spending to try to cushion the impact of a coronavirus-fuelled recession.

The deficit from October through August is more than double the previous 11-month record of $1.37 trillion set in 2009. At that time the US government was spending large sums to get out of the Great Recession triggered by the 2008 financial crisis.

With one month to go in the 2020 budget year, which ends on September 30, the deficit could go even higher. The Congressional Budget Office is forecasting the deficit this year will hit a record $3.3 trillion.

Canada reported zero COVID-19 deaths in the past 24 hours for the first time since March 15, according to public health agency data.

Donald Trump’s administration has expelled about 8,800 unaccompanied migrant children intercepted at the US-Mexico border since March 20 under rules seeking to limit the spread of the new coronavirus in the US, according to court documents.

The Justice Department filing to the Ninth US Circuit Court of Appeals said the Trump administration had expelled 159,000 migrants overall, and 7,600 family units.

The border rules, implemented on March 21, scrap decades-old practices under laws meant to protect children from human trafficking and offer them a chance to seek asylum in a US immigration court.

The confirmed coronavirus death toll in Mexico has surpassed 70,000 after the government reported 534 new deaths in the past 24 hours.

Making matters worse, excess mortality data from mid-March through early August indicates that the total number of deaths beyond the official count is likely tens of thousands higher.

The United Nations General Assembly overwhelmingly approved a resolution on tackling COVID-19, calling for “intensified international cooperation and solidarity to contain, mitigate and overcome the pandemic”.

The resolution, adopted by a vote of 169-2, also urged member states “to enable all countries to have unhindered timely access to quality, safe, efficacious and affordable diagnosis, therapeutics, medicines and vaccines”.

The resolution, which is not legally binding was approved over objections from the US and Israel, which protested against a successful last-minute Cuban amendment that strongly urges countries to oppose unilateral economic, financial or trade sanctions.

A study of coronavirus infection in England showed that the epidemic is doubling every seven to eight days, with an increase in positive cases in all age groups below the age of 65.

The finding came in a study of more than 150,000 volunteers, who were tested between August 22 and September 7, by Imperial College London and polling firm Ipsos MORI.

Health Secretary Matt Hancock said the pandemic is “not over, and everyone has a role to play to keep the virus at bay”.

Separately, the Scientific Advisory Group for Emergencies, which advises the UK government, said the virus’s reproduction rate is now between 1.0 and 1.2, meaning anyone with the virus is infecting, on average, a little more than one other.

For all the key developments from yesterday, September 11, go here.