The University of Chicago’s English Department is being slammed for bias and racism in deciding that it will only accept graduate school applicants interested in ‘working in and with Black studies’ for its 2020-2021 cycle.

The department shared a statement on is website in July announcing their commitment to the ‘struggle of Black and indigenous people, and all racialized and dispossessed people, against inequality and brutality’.

‘For the 2020-2021 graduate admissions cycle, the University of Chicago English Department is accepting only applicants interested in working in and with Black studies,’ the statement adds. 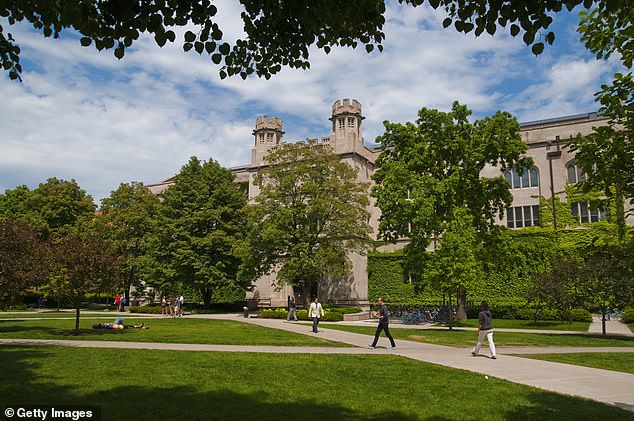 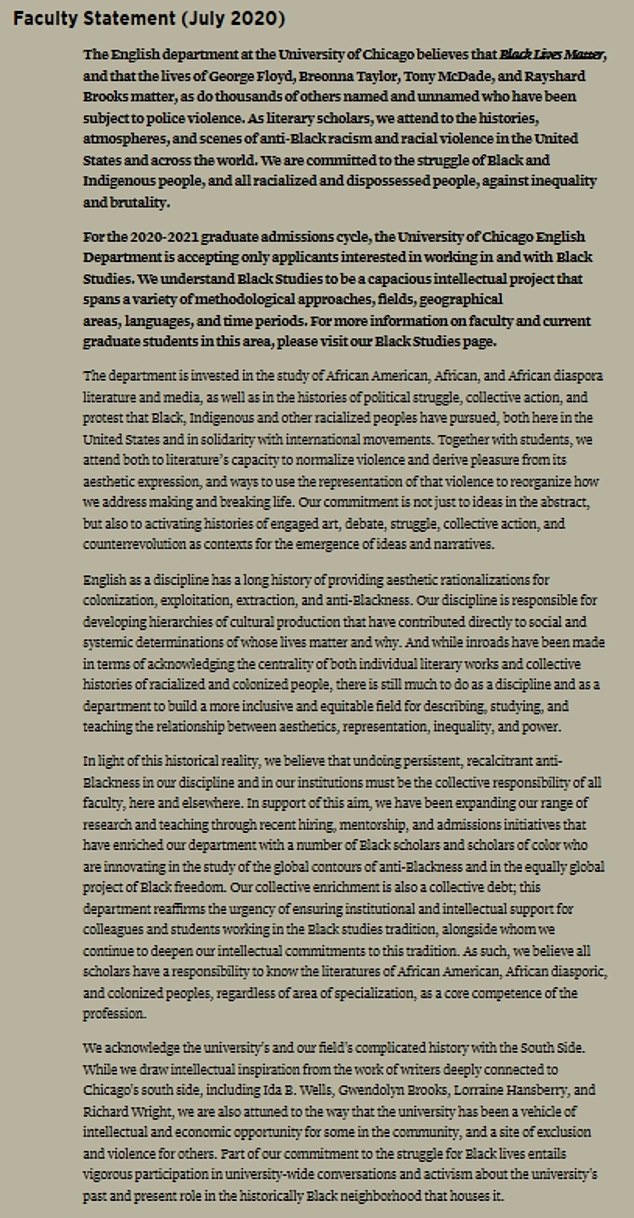 In a statement uploaded to the English department’s website in July (pictured) , the faculty announced their commitment to the ‘struggle of Black and indigenous people, and all racialized and dispossessed people, against inequality and brutality’ 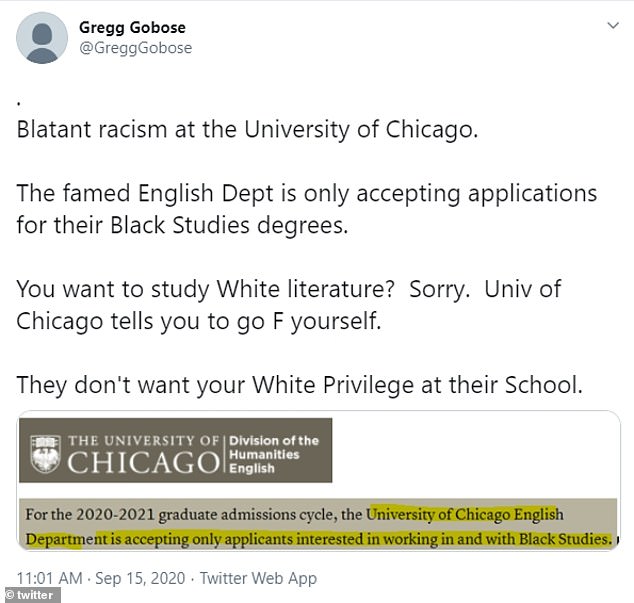 ‘We understand Black studies to be a capacious intellectual project that spans a variety of methodological approaches, fields, geographical areas, languages and time periods.’

English as a subject, the department says, has provided ‘aesthetic rationalizations for colonization, exploitation, extraction and anti-Blackness’.

The statement goes on to deem the ‘collective responsibility’ of the faculty to be ‘undoing persistent, recalcitrant anti-Blackness in our disciplines and in our institutions.’

However, the announcement, which came amid racial unrest and protests, sparked backlash on social media with critics accusing the university of being racist. 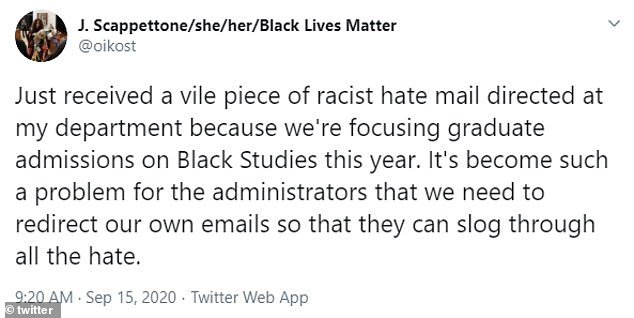 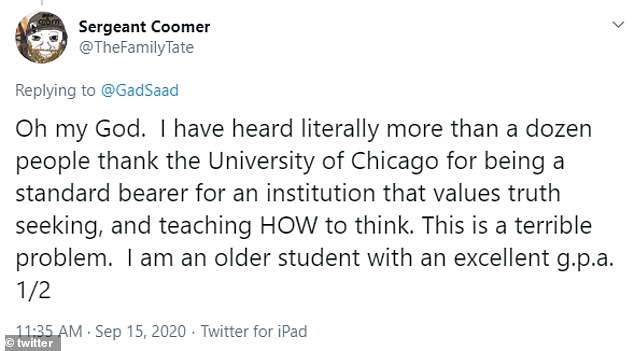 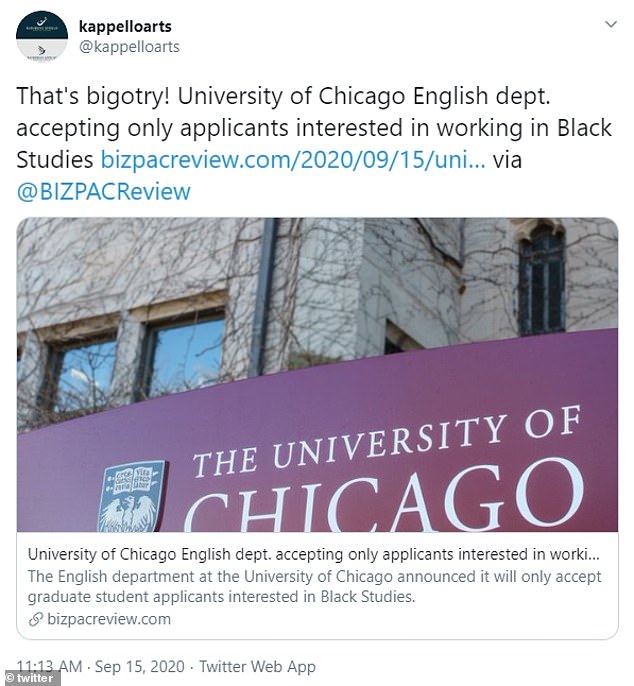 ‘Blatant racism at the University of Chicago…You want to study White literature? Sorry. Univ of Chicago tells you to go F yourself. They don’t want your White Privilege at their school,’ one Twitter user said.

One staffer revealed they received ‘vile’ hate mail due to the focus on black studies.

‘Just received a vile piece of racist hate mail directed at my department because we’re focusing graduate admissions on Black Studies this year. It’s become such a problem for the administrators that we need to redirect our own emails so that they can slog through all the hate,’ the staffer said Tuesday. 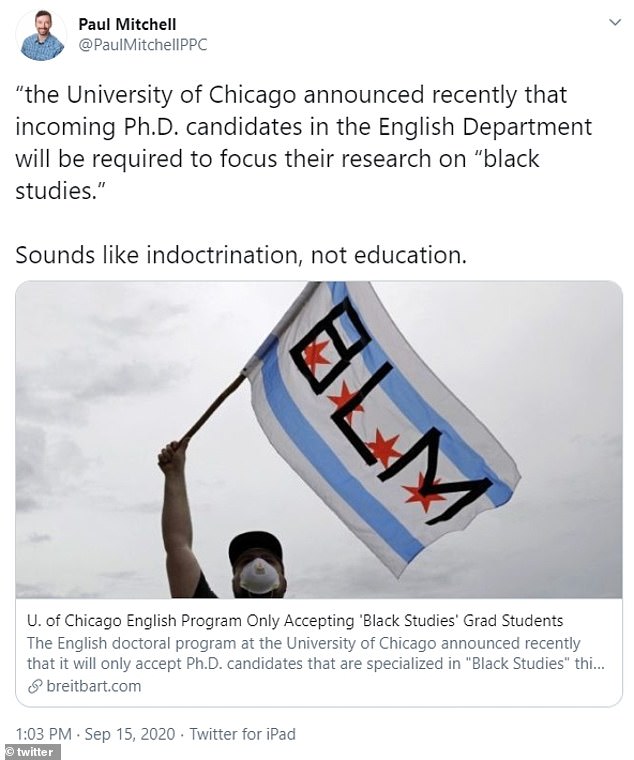 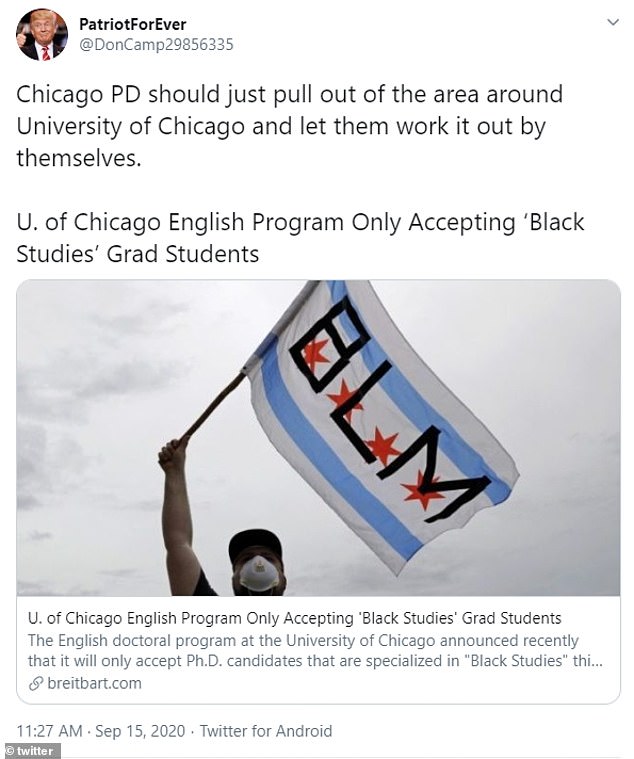 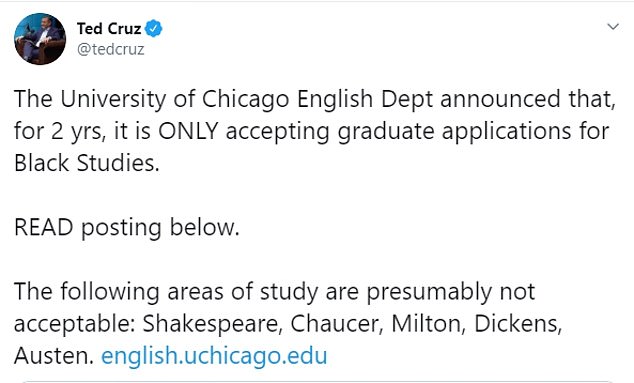 However, the University said in a statement that it is only accepting a limited number of PhD students due to the pandemic and at the moment there are only spaces for five additional students.

Given the movement for justice by the Black community this year, the school believed it was best to award additional scholarships with a focus on Black studies.

‘Currently, there are 77 PhD students studying a wide variety of disciplines within the English Department, and the department is admitting five additional PhD students for 2021. The English department faculty saw a need for additional scholarship in Black Studies, and decided to focus doctoral admissions this year on prospective PhD students with an interest in working in and with Black Studies,’ the University said in a statement to Fox News.

‘As with other departments in the University, the department’s faculty will decide which areas of scholarship they wish to focus on for PhD admissions in future years,’ it added.

The statement was written in July as protests against police violence tore across the US.

Earlier in the statement, the faculty says they believe that ‘Black Lives Matter, and that the lives of George Floyd, Breonna Taylor, Tony McDade, and Rayshard Brooks matter, as do thousands of others named and unnamed who have been subject to police violence.’

DailyMail.com has reached out to the university for comment.