An urgent warning has been issued for millions of Australians in new coronavirus hotspots to get tested immediately.

The alert was announced on Wednesday evening by NSW Health and asked people in a number of Sydney suburbs to go to a COVID-19 testing centre straight away.

Health bosses called for residents get a swab ‘if they have even the mildest of COVID-19 symptoms such as a runny nose or scratchy throat’. 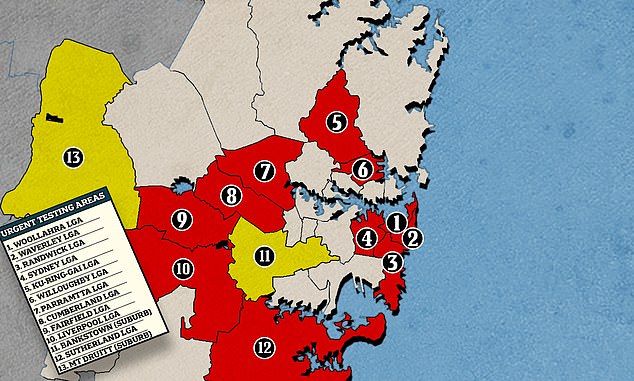 Pictured: A map of the new coronavirus hotspots in Sydney. Areas include Surry Hills, Darlinghurst, Woolloomooloo, Potts Point, and some western suburbs 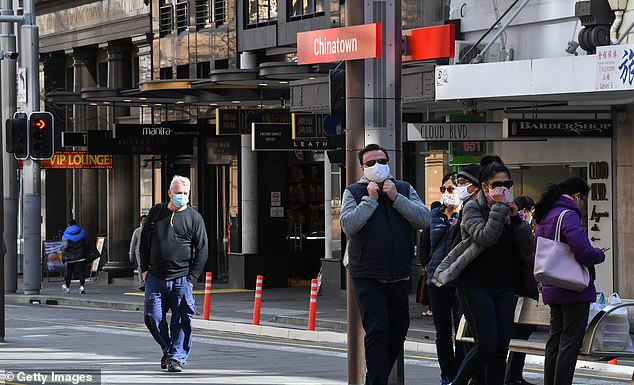 Western suburbs including Bankstown, Mt Druitt, Parramatta and Liverpool were also asked to get tested.

New South Wales recorded 12 cases of coronavirus on Thursday, bringing the total number of cases in the state to 3,902.

Five of the 12 new cases are linked to known clusters including three out of a growing source of infection in Sydney CBD, which has ballooned to 52 infections. 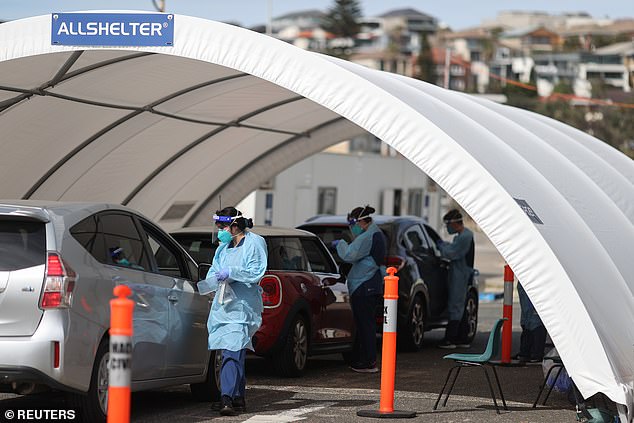 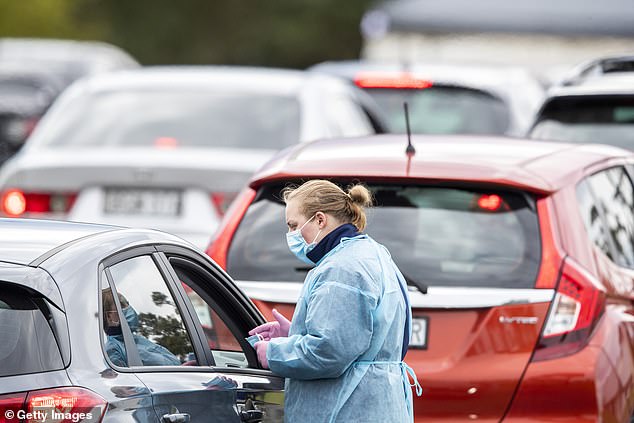 Western suburbs including Bankstown, Mt Druitt, Parramatta and Liverpool were also asked to get tested. Pictured: A health care worker at a COVID-19 pop up testing clinic

Customers at Westfield Chatswood on August 27 have been notified as casual contacts of a coronavirus infection and have been told to monitor for symptoms.

Three of the new cases were acquired locally, including two from a family in the city’s southwest and another case in Parkes with no source identified.

Returned travellers in hotel quarantine account for another three, while an additional case is linked to a previously recorded case in south eastern Sydney.

There were 29,607 tests conducted in the reporting period, with NSW Health officials treating 86 cases including six in intensive care and three on ventilators.

Despite the rise, Premier Gladys Berejiklian said the state was ‘back on track’. Pictured:  Health care workers during a breakout at a school in August

Despite the rise, Premier Gladys Berejiklian said the state was ‘back on track’.

‘It’s good to see the remaining cases back down to single digits,’ Ms Berejiklian said in a press conference on Thursday morning.

‘We have learned in NSW to manage the pandemic but also to make sure we get on with life,’ she said.

‘We allow our citizens the maximum freedoms and the maximum quality of life that they can have during this difficult time.’