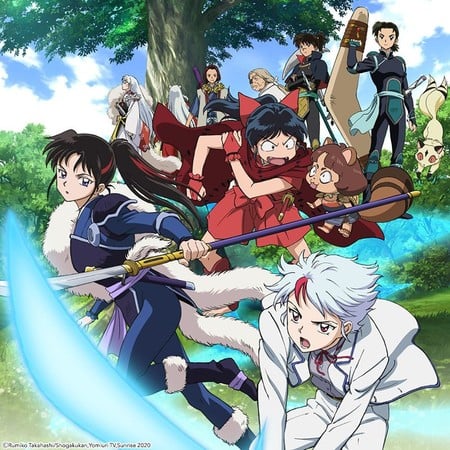 The official website for singer Uru (themes for Granbelm, Natsume Yujin-cho the Movie: Ephemeral Bond) announced on Sunday that she will perform the ending theme song “Break” for the Yashahime: Princess Half-Demon (Han’yō no Yasha Hime) anime spinoff of Rumiko Takahashi‘s Inuyasha series. Uru wrote and composed the song specifically for the show, and Yaffle arranged the song. The single for the song will ship on October 28.

The anime will premiere in Japan on October 3 on YTV and NTV. The show stars:

Viz has the rights “to the digital streaming, EST, and home video” of the anime in North and Latin American territories. The company describes “the brand new anime from the Inuyasha universe”:

The daughters of Sesshomaru and Inuyasha set out on a journey transcending time!

In Feudal Japan, Half-Demon twins Towa and Setsuna are separated from each other during a forest fire. While desperately searching for her younger sister, Towa wanders into a mysterious tunnel that sends her into present-day Japan, where she is found and raised by Kagome Higurashi’s brother, Sota, and his family.

Ten years later, the tunnel that connects the two eras has reopened, allowing Towa to be reunited with Setsuna, who is now a Demon Slayer working for Kohaku. But to Towa’s shock, Setsuna appears to have lost all memories of her older sister.

Joined by Moroha, the daughter of Inuyasha and Kagome, the three young women travel between the two eras on an adventure to regain their missing past.

Teruo Sato (Inuyasha episode director) is directing the anime at Sunrise, and Katsuyuki Sumisawa is in charge of the series scripts after doing the same for Inuyasha and Mobile Suit Gundam Wing. Takahashi herself is credited as the main character designer, with Yoshihito Hishinuma (Yakitate!! Japan, City Hunter: Shinjuku Private Eyes) returning from Inuyasha to adapt her designs for animation. Kaoru Wada (3×3 Eyes, Battle Angel, The File of Young Kindaichi) is also back from Inuyasha to compose the music.

Takahashi launched the original manga in Weekly Shonen Sunday in 1996, and ended it in 2008. Viz licensed and published all 56 volumes of the manga in North America.

The 167-episode anime series based on the manga ran from 2000-2004. A 26-episode sequel anime titled InuYasha: The Final Act then ran from 2009-2010. The series has inspired four movies and a 30-minute anime short. Viz began releasing the anime on Blu-ray Disc last year.

The franchise has also recently inspired a smartphone game and a stage play.

Thanks for Kougeru for the news tip.