The US Ambassador to China, Terry Branstad, is stepping down, Mike Pompeo announced today, amid deteriorating relations on trade, Hong Kong and coronavirus.

The Secretary of State thanked Branstad, tweeting that he had ‘contributed to rebalancing US-China relations so that it is results-oriented, reciprocal, and fair.’

The reasons for the ambassador’s departure were not immediately clear, and China’s Ministry of Foreign Affairs – while acknowledging Pompeo’s tweet – said it had not received notice of his resignation.

However, the former two-term Iowa governor, 73, roiled Beijing earlier this month with an opinion piece penned for the Communist Party newspaper, the People’s Daily, which had accused China of ‘exploiting’ US openness in recent years. 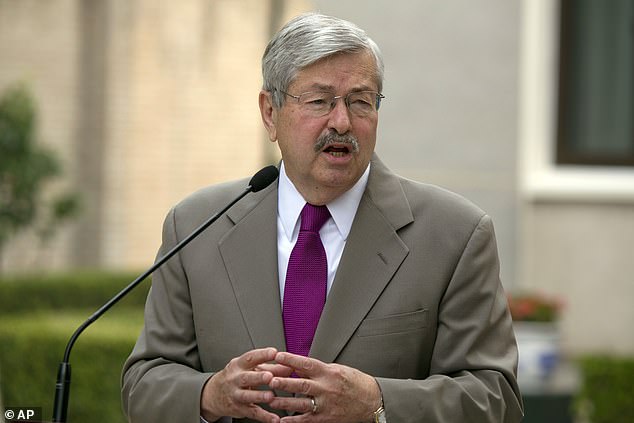 In a statement on the embassy’s Weibo (Chinese Twitter equivalent), Branstad said: ‘I will step down from the post of U.S. Ambassador to the People’s Republic of China early next month.

‘I am extremely honored to represent the President of the United States and the American people in the past over three years. We are rebalancing the US-China relationship to make it fair, reciprocal and to promote positive growth in both countries. This effort will continue. 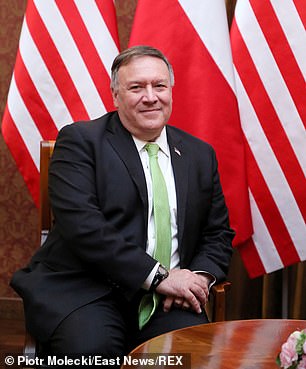 ‘As I’m leaving the office, I am as optimistic as when I first arrived. I have met so many amazing people in China. My wife Chris and I will never forget your hospitality.’

Branstad had been in office since May 2017, representing Washington in Beijing during a period of strained ties with China, marked by tensions over trade, regional territorial claims, the coronavirus pandemic, and unrest in Hong Kong.

In June, he was summoned by Beijing after President Donald Trump signed a law that paved the way for sanctions over Hong Kong, an action the foreign ministry slammed as ‘gross interference in China’s internal affairs’.

Last year, he called on Beijing to open a ‘substantive dialogue’ with the Dalai Lama during a rare visit to Tibet, a region where the central government is accused of widespread repression.

Branstad’s article for the People’s Daily last week prompted a war of words between Washington and Beijing, who said it was not fit for publication.

Branstad ‘needed back in Iowa for the Trump campaign’

Branstad, previously the longest-serving governor of Iowa, a state in the U.S. Farm Belt which helped Trump get elected in 2016, will leave China in early October, the U.S. embassy said in a statement.

Republican Trump won Iowa by about 9 percentage points in 2016 after his Democratic predecessor Barack Obama had won in the 2008 and 2012 elections. Trump was expected to win the state easily in 2020 against Democratic candidate Joe Biden, but some opinion polls show the race tightening, attracting money from Democrats in the U.S. Senate and presidential race who now see the state as winnable.

Sources familiar with the matter cite Branstad’s popularity in Iowa, having served there as governor for over two decades, as an asset to Trump.

‘I suspect the real answer, as usual, is the simplest one: the Trump campaign needs help shoring up Iowa, including making the case to farmers that the President’s trade policy has helped them – not an easy sell,’ said Matthew Goodman, a trade expert at the Center for Strategic and International Studies.

Trump has tested the loyalty of his rural base in Iowa through his trade wars with China and his handling of corn-based ethanol mandates, a core economy for the state.

On Saturday, Trump hinted that Branstad might be joining the campaign. In a video posted on Twitter by Iowa senator Joni Ernst, Trump said Branstad would be coming home from China ‘because he wants to campaign.’

The US Embassy had contacted the People’s Daily on August 26 about the piece, asking that it be printed in full without any edits by September 9.

Pompeo tweeted that the Communist Party refused to run Branstad’s op-ed while the Chinese ambassador to the United States ‘is free to publish in any U.S. media outlet.’

An early supporter of Trump’s run for the White House in 2016, Branstad was appointed soon after the election.

At the time, Trump’s transition team praised his ‘tremendous understanding of China and Chinese people.’

He was reported to have a long-standing relationship with Chinese President Xi Jinping, whom he first met in the 1980s in Iowa.

Branstad will retire and leave Beijing early next month.

Hu Xijin, chief editor of major Chinese nationalist newspaper Global Times, commented on his Weibo: ‘When Branstad was appointed as the ambassador to China, Chinese and American public opinion had high expectations that he could play a role in promoting relations between the two countries.

‘Few ambassadors are willing to seriously deteriorate the relationship between their country and the host country during his tenure instead of improving it. From this perspective, I don’t believe that Ambassador Branstad played a role in promoting the process of the cliff-like fall of Sino-US relations.

‘The sharp reversal of the US policy towards China is obviously directly determined by Washington. Even if Ambassador Branstad has the intention to ease the cliff-like fall of Sino-US relations, his room for action is very small. He is unlikely to stand in the way of Washington being hostile to China.

‘Most of the people who came into contact with Branstad in China have a good personal impression of him. It is still unclear whether Branstad himself offered to resign as ambassador to China or Washington directly removed him. According to the analysis of Chinese scholars, the former is more likely. If so, perhaps he does not want to be the scapegoat that ruined Sino-US relations for the Trump administration. Of course, it is not ruled out that Trump transfers him back to help stabilize the election in Iowa.

‘In any case, Sino-US relations have deteriorated severely during his tenure as ambassador to China. This cannot be the ambassador’s professional glory. If the US news is true, his departure from China will be bleak. The United States will not succeed in doing this to China, and history is destined to give it negative comments. Branstad will be one of these followers. As for where the Sino-US relations will go next, the replacement of a weaker ambassador to China will not become an influential factor.’

Trump hails the ‘tremendous progress’ made at the meeting and Xi references further understanding and trust between the countries.

In May, US Commerce Secretary Wilbur Ross reveals a ten-part agreement between Beijing and Washington to build up trade.

March, 2018: White House imposes a broadside of tariffs worth $50 billion on Chinese goods coming into the US.

Beijing retaliates in April with its own import taxes on a raft of US products.

The trade war marks a shift from the peaceful overtures of the previous year.

China lashes back with its own tariffs on US commodities worth $34 billion.

Trump says that China has been ‘ripping off’ America for years, while the Chinese accuse Washington of ‘trade bullying.’

Resulting impact on trading floors puts the world on edge.

March, 2019: Huawei sues the US for banning federal agencies for using its technology.

The White House warns other countries against deals with Huawei and using its consumer products.

China hits back with import taxes worth $60 billion.

Trump believes that he can bring China to heel, while Beijing says he has ‘extravagant expectations.’

January, 2020: Trump and Chinese Vice Premier Liu He sign ‘Phase One’ of a trade deal as the countries finally appear to be putting an end to their two year-long trade war.

Deal eases tariffs and China pledges to buy US goods worth $200 billion and enforce laws to protect US intellectual property.

However, many of the tariffs remain and it fails to tackle Beijing’s colossal subsidies of Chinese companies which American CEOs have long decried for stacking global markets against them.

Trump says these issues can be ironed out in ‘phase two’ of the deal.

Tensions soar amid the coronavirus pandemic as Trump bans travel from China on January 31.

The US accuses China of covering up extent of the pandemic after it was designated as such by the WHO.

A Chinese Foreign Ministry spokesman makes spurious claims that the virus was brought to China by a US soldier.

Trump continues to call it the ‘China virus’ despite the countries agreeing a level of cooperation to deal with the crisis.

It also demands that other American publications hand over information about their activities in China.

July 14, 2020: Trump ends special trade status for Hong Kong and introduces sanctions for companies on the island which are pro-Beijing.

Beijing furiously responds to US ‘interference’ in its domestic affairs.

July 22, 2020: US orders China to shut its consulate in Houston, Texas, claiming it was used for spying.