A U.S. Marine convicted of killing a Filipino transgender woman was deported on Sunday after a presidential pardon cut short his detention, in a case that renewed outrage over a pact governing American military presence in the Philippines.

Lance Cpl. Joseph Scott Pemberton said in a farewell message that he was ‘extremely grateful’ to President Rodrigo Duterte for pardoning him and expressed his ‘most sincere sympathy’ to the family of Jennifer Laude, 26, who he was convicted of killing in 2014 after finding out that she was a transgender in a motel northwest of Manila.

During his five-year confinement, Pemberton said he spent ‘much time contemplating the many errors’ he committed the night Laude died.

‘He wishes he had the words to express the depth of his sorrow and regret,’ according to Pemberton’s message, which was issued by his lawyer, Rowena Garcia-Flores. 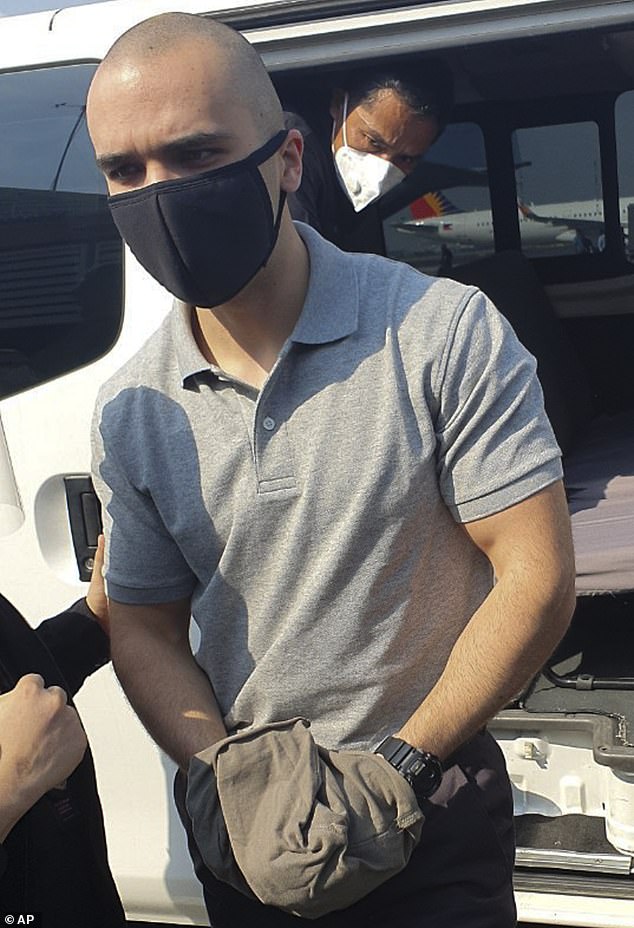 Lance Cpl. Joseph Scott Pemberton arrives with his handcuffs covered at the airport 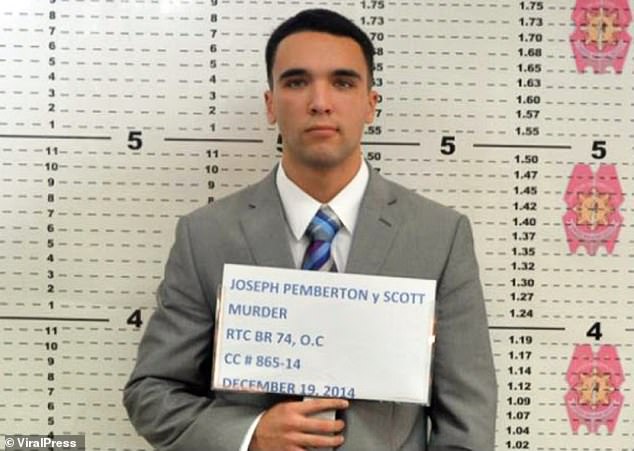 Pemberton is photographed on the night of his arrest in 2014

Philippine immigration officers and American personnel escorted the 25-year-old Marine, who was in handcuffs and wearing a face mask, from his cell in the main military camp in metropolitan Manila to the airport, where he boarded a military aircraft.

Ahead of the flight, he had a coronavirus test, which was negative, immigration spokeswoman Dana Sandoval told The Associated Press. 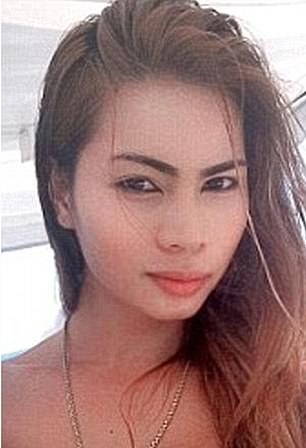 The U.S. Embassy said ‘all legal proceedings in the case took place under Philippine jurisdiction and law’ and that ‘Pemberton fulfilled his sentence as ordered by Philippine courts.’

On Monday, Duterte granted an ‘absolute and unconditional pardon’ to Pemberton in a move that caught many by surprise.

The Philippine leader has long been a vocal critic of U.S. security policies while reaching out to China and Russia.

Duterte’s pardon was condemned by left-wing and LGBTQ groups.

Debate has brewed whether the Marine, whose detention was arranged under the treaty allies’ Visiting Forces Agreement, can be covered by a Philippine law that grants shorter jail terms to ordinary prisoners for good conduct.

The Regional Trial Court in Olongapo city, which handled Pemberton’s case, ruled that the law covers Pemberton and ordered authorities on September 1 to release him early for good conduct. 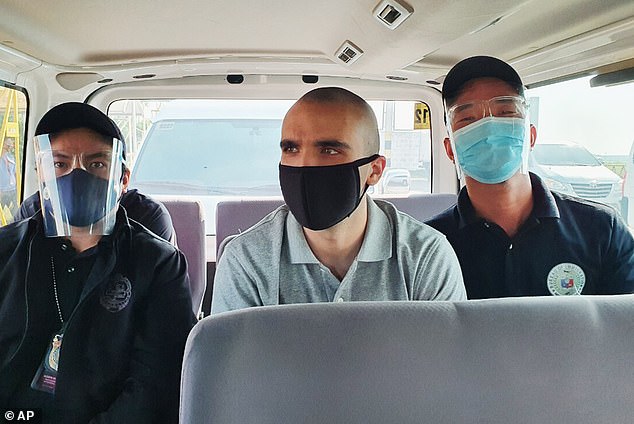 Pemberton is pictured on Sunday en route to the airport for transfer home to the U.S. 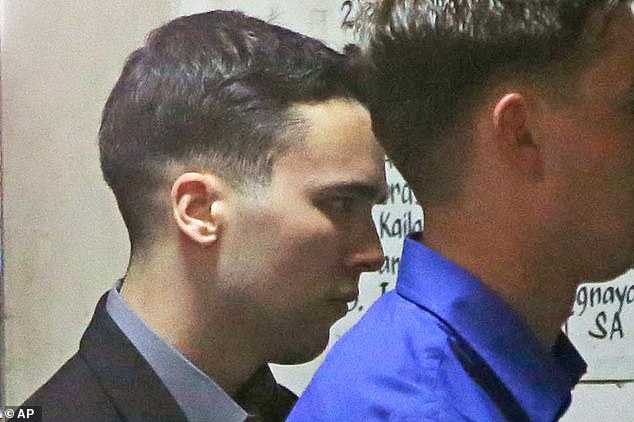 Pemberton is shown arriving in court in December 2015 for sentencing

But Laude’s family and the Department of Justice separately appealed, blocking his early release from a maximum prison term of up to 10 years.

Duterte said he granted the pardon because Pemberton was not treated fairly after his early release, which he said the Marine may have deserved, was blocked.

The court order rekindled perceptions that American military personnel who run afoul of Philippine laws can get special treatment under the Visiting Forces Agreement, or VFA, which provides the legal terms for temporary visits by U.S. forces to the country for large-scale combat exercises.

Pemberton, an anti-tank missile operator from New Bedford, Massachusetts, was one of thousands of American and Philippine military personnel who participated in joint exercises in the country in 2014.

He and a few other Marines were on leave after the exercises and met Laude and her friends at a bar in Olongapo, a city known for its nightlife outside Subic Bay, a former U.S. Navy base.

Laude was later found dead, her head slumped in a toilet bowl in a motel room, where witnesses said she and Pemberton had checked in.

A witness told investigators that Pemberton said he choked Laude after discovering she was transgender.

In December 2015, a judge convicted Pemberton of homicide, not the more serious charge of murder that Philippine prosecutors sought. 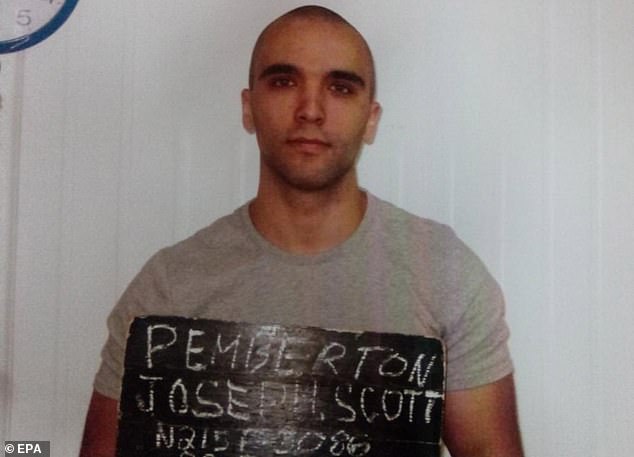 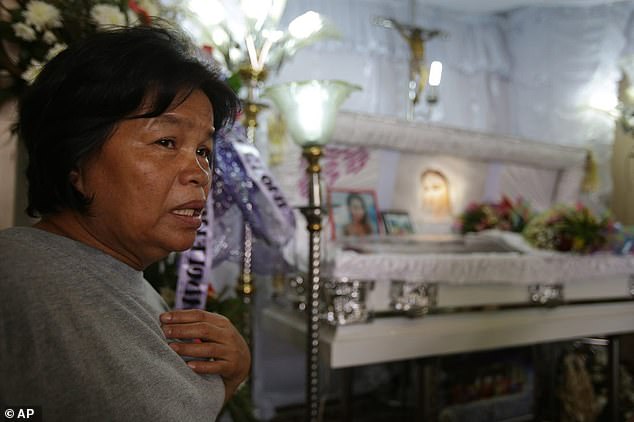 Julita Laude, mother of Jennifer Laude, is pictured by her coffin in October 2017

The judge said at the time that factors such as cruelty and treachery had not been proven.

The VFA could have been abrogated last month if Duterte had not delayed an earlier decision to terminate the pact after President Donald Trump expressed readiness to help the Philippines deal with the COVID-19 pandemic.

The Philippine leader has said his country can survive without America.

If the VFA had been scrapped, it would have removed a legal basis for Pemberton’s detention in the military camp and created pressure for him to be moved to one of the country’s notoriously overcrowded and high-risk prisons for ordinary criminals.